Most investors likely want to move on from 2022 as quickly as possible. The market experienced its worst first half of the year since 1970, and numerous growth tech stocks lost more than 75% of their value.

That performance has put off many investors in stocks. Nonetheless, the market has recovered from every previous downturn, and the current one will likely not be an exception. Moreover, many of the highest-quality stocks trade at discounted prices, and picks like Alphabet (NASDAQ: GOOGL) (NASDAQ: GOOG), Fiverr International (NYSE: FVRR), and Toast (NYSE: TOST) appear well positioned to usher in a better 2023 for investors. Here’s why these three Motley Fool contributors like them:

The tech downturn likely strengthened the position of this giant

Will Healy (Alphabet): Most investors know the Google parent best for its dominant search engine, its position in the digital advertising market, and ownership of the Android operating system.

For much of its history, dominance in digital advertising drove the stock higher. And now that growth has slowed in that business amid a struggling economy, shareholders have turned on the stock, sending it 40% lower over the last 12 months.

But investors might have ignored a key asset: the asset base itself. Alphabet held $116 billion in liquidity on its balance sheet as of the end of the third quarter of 2022.

One of the ways it used its cash was purchasing numerous innovation-focused companies. Some examples include autonomous driving company Waymo, life sciences enterprise Verily, and artificial-intelligence (AI) specialist DeepMind Technologies.

Few of these enterprises appear in Alphabet’s financials, but Google Cloud has become a rare exception. It lags only Amazon Web Services (AWS) and Microsoft Azure in market share. While Alphabet’s revenue grew by only 6% in the latest quarter, Google Cloud revenue increased by 38%, making it the company’s current growth engine.

Still, Google Cloud’s success could not prevent Alphabet’s slowing growth. That, along with higher operating expenses and lower asset revaluations, led to a rare year-over-year drop in net income. Its third-quarter earnings of $46 billion dropped 16% versus the same quarter last year.

Nonetheless, amid falling earnings and a lower stock price, its price-to-earnings (P/E) ratio has dropped to 17. That is its lowest level since 2013, making Alphabet’s valuation significantly cheaper than most of its cloud peers. Such an earnings multiple could make 2023 a great time to buy Alphabet shares as the company continues to invest in innovation.

Justin Pope (Fiverr International): Freelancing marketplace Fiverr was a big-time pandemic winner; the stock soared to more than $300 in 2021 before imploding to less than $30 in 2022.

So after a wild two-year ride, what’s in store for 2023? It’s essential to understand what Fiverr does and how that factors into the long-term outlook of the freelance economy. Its marketplace brings freelancers together with buyers. The platform is an enclosed ecosystem that handles all aspects of a transaction, from communication to payment. In return, Fiverr takes a percentage of the transaction.

It’s true that Fiverr benefited from pandemic lockdowns; people turned to alternatives to their routine jobs when lockdowns shut down businesses worldwide. You can see below how revenue growth spiked and has come back down. Importantly, Fiverr hasn’t stopped growing: 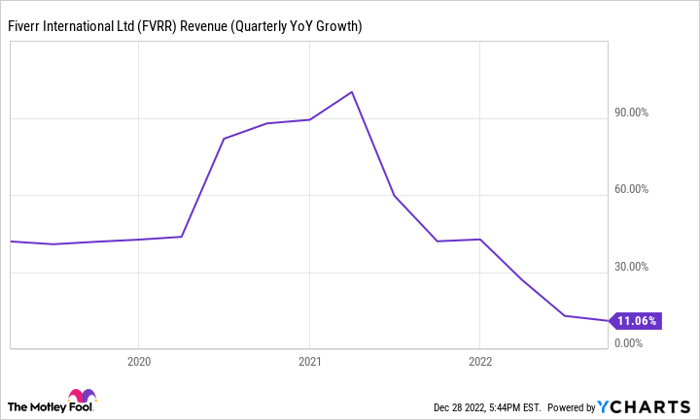 But growth has slowed, partly due to its spurt in 2020-2021 (a tough act to follow for year-over-year comparables) and fears over a potential recession in 2023. Management has noted in recent earnings calls that Fiverr is focusing on efficient spending versus a growth-at-all-costs strategy.

The long term could be bright, however. The 2022 Tech Work Report indicated that 73% of technology companies are already staffing a blend of full-time and freelance employees. Fiverr itself estimates that its addressable market in the United States alone is $247 billion (its revenue is just $334 million over the trailing four quarters).

That much room for expansion creates an enticing opportunity for investors with a multiyear mindset. Fortunately, the ongoing bear market has provided opportunities today. The stock trades at a price-to-sales ratio (P/S) of 3, the lowest valuation since the company went public in 2019. If you’re bullish on the potential of freelancing, it could be hard to find a better way to add it to your portfolio than buying Fiverr heading into the New Year.

This hypergrowth stock could sizzle in 2023

Jake Lerch (Toast): Toast is a software company that provides digital solutions to the food service industry. The company has hardware and software that help restaurants run more efficiently.

If you have yet to experience paying a restaurant bill through one of Toast’s point-of-sale (POS) devices, you’ll likely do it in 2023. More than 74,000 restaurants already use Toast technology for POS, and that number continues to grow.

In the third quarter of 2022 (the three months ending on Sept. 29), Toast processed more than $25 billion worth of restaurant bills. And while that was up 53% from the same period a year earlier, Toast has only begun to scratch the surface of its total addressable market (TAM). The company estimates that, in the U.S. alone, its TAM exceeds $55 billion. Globally, its TAM soars to an incredible $110 billion.

The company generated a modest $2.5 billion in sales over the last 12 months, with quarterly revenue growing 55% year over year. However, as is often so with new, fast-growing companies, Toast is unprofitable. In its most recent quarter, the company’s operating margin came in at a negative 11%, and its free cash flow was a negative $80 million. 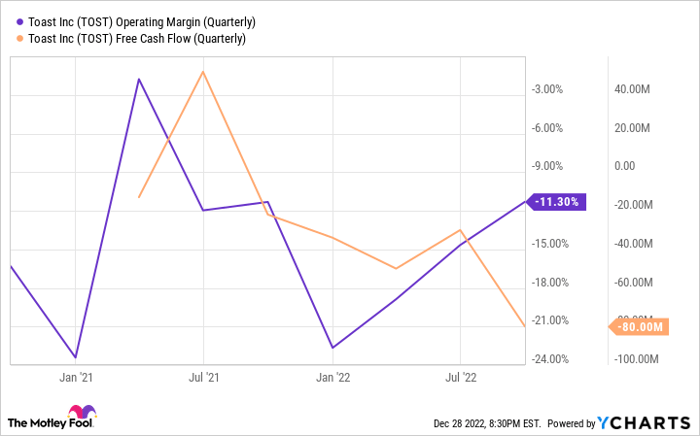 And while the company’s balance sheet looks solid — it has over $1 billion of cash and total debt below $100 million — unprofitable companies have felt the pain in 2022. Toast is no exception. Its stock is down more than 52% year to date.

However, if the company can continue growing its revenue in 2023, its future will be bright. Restaurants continue to face staffing shortages, while high costs for food are eating away at their profitability. Toast’s technology offers a way for them to become more efficient and, therefore, more profitable. For investors who are OK with taking on some risk in 2023, Toast is a growth stock to remember.

10 stocks we like better than Alphabet
When our award-winning analyst team has a stock tip, it can pay to listen. After all, the newsletter they have run for over a decade, Motley Fool Stock Advisor, has tripled the market.*

They just revealed what they believe are the ten best stocks for investors to buy right now… and Alphabet wasn’t one of them! That’s right — they think these 10 stocks are even better buys.