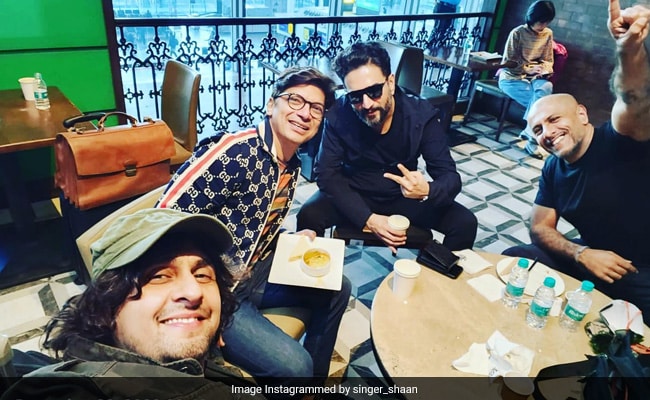 Singer Shaan has treated his Insta family to a picture featuring Sonu Nigam, Vishal Dadlani and Sheykhar Ravjiani. Last year on December 23, the veteran singers spent some quality together, and now, the singer has dropped a picture sending a message to his friends that he is “looking forward to more such pleasant surprises.” In the image, Sonu Nigam can be seen clicking the selfie while Shaan, Sheykhar and Vishal happily pose for the camera. Sharing the post, he wrote, “4 Musketeers !!! Looking forward to more such pleasant surprises… when we can catch up and spend some fun times together… in 2023!! #goodtimeswithgoodfriends,” followed by a heart emoticon.

Soon after Shaan shared the post, Vishal Dadlani commented, “Love you all, guys. We should all meet more often. @shekharravjiani @sonunigamofficial aap sab bataao kab.” Their fans also flooded the comment section calling them “OGs” and their “favourites”. A user wrote, all the icons in one place.” Another wrote, “We want to hear more of Sonu Nigam and Shaan and less of the auto tuned so called singers. Bring back the late 90s and early 2000s with these beautiful musicians.”

Sonu Nigam, Shaan, Vishal Dadlani and Sheykhar Ravjiani are considered among the most talented and popular singers in the music industry. They delivered numerous hits in Bollywood during the 90s and 2000s.

Meanwhile, Shaan wished his fans on New Year with an adorable picture of him and his wife, Radhika. In the caption, he wrote, “Wishing You all a Very Happy 2023!!!! Lots of Love, Health, Happiness and Success.”