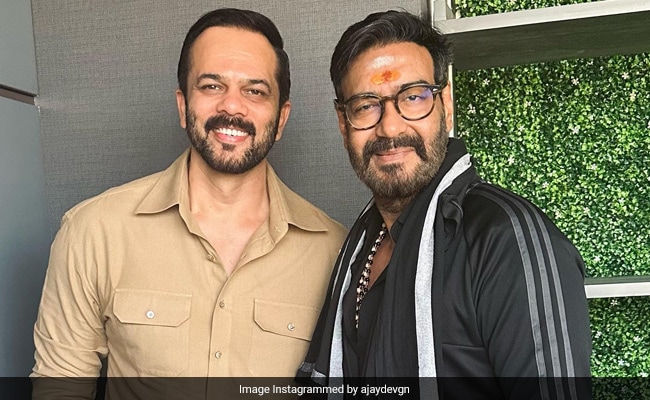 Ajay Devgn and Rohit Shetty have made history whenever they have worked together. The actor-director duo are also famous for their friendship and shared professional milestones. One of their most well-known collaborations is the Singham franchise, which has Ajay Devgn essaying the role of a police officer. Now, as per the actor, the next instalment of Singham is going to be an exciting project. Ajay Devgn, in a post, has shared that he is mighty impressed with the script of the action film. Sharing an image with Rohit Shetty, Ajay Devgn said, “Made a good start to the New Year with Rohit Shetty’s narration of Singham Again. The script I heard is (fire). God willing this will be our 11th blockbuster.”

Rohit Shetty, whose last film Cirkus did not manage to impress the audience, replied to the post saying, “Ab tak Imaandaari aur Mehnat ke saath kaam kiya hai… is baar andar Aag bhi hai… [I have put in honesty and hardwork so far. This time, there will be fire too].”

Rohit Shetty’s Cirkus, which failed to make money at the box office, features Ranveer Singh in the lead role. About the film, NDTV’s  Saibal Chatterjee said, “Yes, Cirkus is abysmally bad. It is a mind-numbing film that would have done the world a favour by not advancing beyond the script stage. It does neither the medium nor the genre any justice. The only thing that is truly comical about Cirkus is its unmitigated ineptitude,” adding that it does not do justice to Ranveer or Rohit’s talent.

Meanwhile, Ajay Devgn’s Drishyam 2 has turned out to be a blockbuster. The film has made over ₹ 200 crore and the happy news was shared by the actor on Instagram. He wrote, “Drishyam 2 200 crore plus and counting. Congratulations to the entire team. And, thank you all for the love. Humbled.”

Drishyam 2 is the Hindi remake of the Malayalam hit that featured Mohanlal in the lead role.

On the work front, Ajay Devgn will be seen in Bholaa, which is also a remake. The film is the official Hindi adaptation of the Tamil hit Kaithi, which featured Karthi in the lead.