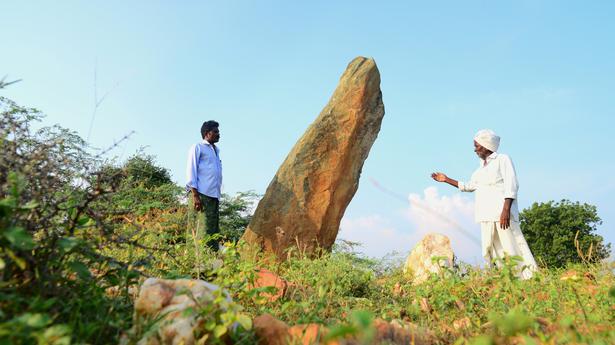 Said to be 2.47 lakh years old, the artefacts can alter the understanding of human evolution in the Indian subcontinent

Said to be 2.47 lakh years old, the artefacts can alter the understanding of human evolution in the Indian subcontinent

Archaeologists and historians are agog over the findings of the Ahmedabad-based Physical Research Laboratory, which stated that stone tools excavated from Hanumanthunipadu in Prakasam district can possibly be as old as 2.47 lakh years old (Middle Palaeolithic) — a development that could change the understanding of human evolution in India.

The dating of the stone tools was carried out at the Luminescence Laboratory of the Atomic Molecular and Optical Physics wing of the Physical Research Laboratory (PRL) in Ahmedabad, said reports.

The report quoted Devara Anil Kumar, Assistant Professor at Maharaj Sayajirao University’s Department of Archaeology and Ancient History, as saying that the tools, such as points, scrapers, notches and flakes, were present in the Indian subcontinent even before modern humans migrated from Africa and that it is difficult to identify who made these tools in the absence of fossil remains.

“Missing fossils (absence of evidence) is a major setback in digging into the past. History does not stay behind, it helps us understand how events in the past shaped the things the way they are today,” says P. Suresh, Deputy Director (Technical), Department of Archaeology and Museums, Andhra Pradesh.

“We have massive stone structures dotting parts of Andhra Pradesh that provide a fascinating glimpse into our prehistoric past. But many of these ‘man-made monuments’ remain as riddles for want of fossils,” he bemoans.

The department’s Assistant Director Swamy Naik speaks of a treasure trove of megaliths (large stones) found in the recent past in different parts of the State and says these structures of massive stones tell stories of our ancestors.

Mr. Naik talks excitedly about the over 300 megalithic burial sites within a radius of 5 km discovered in July this year in a recent exploration at Achammakunta village in Macherla mandal of Palnadu district. “The site screams of a great civilisation that flourished at this place 4,000 years ago, and opens a new chapter in the megalithic history of Andhra Pradesh,” he says.

Remnants of the megalithic culture, also known as the Iron Age, are found in Europe, Africa and Asia. In India, it is sporadic in occurrence in the north in comparison with the southern States.

“The tradition of disposal of dead bodies, beginning with the pit and urn burials of the Neolithic-Chalcolithic times, underwent many changes. New dimensions were seen in the Megalithic Age,” says Mr. Naik, elaborating on the main characteristics of the Achammakunta site.

The site indicates construction of big tombs with widespread use of iron objects and special red and black pottery. “The graves can mean two things: either the dead were buried, or the bodies were cremated and the remains were buried,” he explains.

Dolmens and cists — ancient stone structures generally regarded to have been used as burial chambers — are examples of innovative architecture. “Interestingly, all burials have a south-facing entrance suggesting that they may have followed Vaastu,” Mr. Swamy Naik says, informing that each grave is surrounded by a wall.

Large boulders were used to build megalithic burial structures that have come to be known as ‘Rakshasa Gollu’. Earthen vessels and skeletons have been excavated at these places.

The large tombs indicate prevalence of the concept of ‘Punarjanma’ (rebirth). In order to prevent the soul of the dead from coming back to the villages and causing possible harm, people built tombs as big as houses and the deceased’s implements and favourite food were placed in pots and deposited in the grave. There are also signs of prevalence of agricultural practices, pastoralism, hunting and specialised crafts.

Realising the need to take up excavations at this site, State department officials say that it would provide insights into the culture, administrative systems, trade and commerce and the overall lifestyle of our ancestors who lived here. “More importantly, we would know how such a flourishing culture disappeared from this land,” says Mr. Naik.

According to the information available with the department, the government carried out 13 excavations at megalithic burial sites in Andhra Pradesh since 1976-77. Twelve of them were carried out in the erstwhile united State of Andhra Pradesh while one was executed after bifurcation.

The last excavation was in 2017-18 at Rudramakota (right bank) and Rayunipeta (left bank) in the Polavaram submergible area, to salvage the cultural vestiges following a detailed archaeological investigation.

The seven megalithic sites identified in the initial round of survey were reduced to four in a re-survey. “This is because the remains were totally wiped out in two villages while another village has gone to Telangana State,” informs Mr. Suresh.

More excavations are to be taken up at Rayanapeta but it may take time as the department awaits allocation of funds. Shortage of staff and funds hinder effective functioning of the department which is responsible for archaeological research and conservation and preservation of cultural historical monuments in the State.

“For a robust study of human history and prehistory through excavation of sites and analysis of artefacts and other physical remains, we need adequate staff to guard them and ensure their upkeep and to maintain them through structural interventions,” says Emani Nagireddy, CEO of Hyderabad-based PLEACH (Preserve Learn Educate Art Culture and Heritage).

Protection is a challenge, admit the department staff, citing vandalism by treasure hunters and agricultural operations by local villagers, flattening the monuments of heritage. Farming has destroyed a large number of sites on the riverbanks, wiping away traces of once-flourishing civilisations. The problem is dire and officials are contemplating ‘de-protection’ of some of the sites that have disappeared thanks to their prolonged neglect.