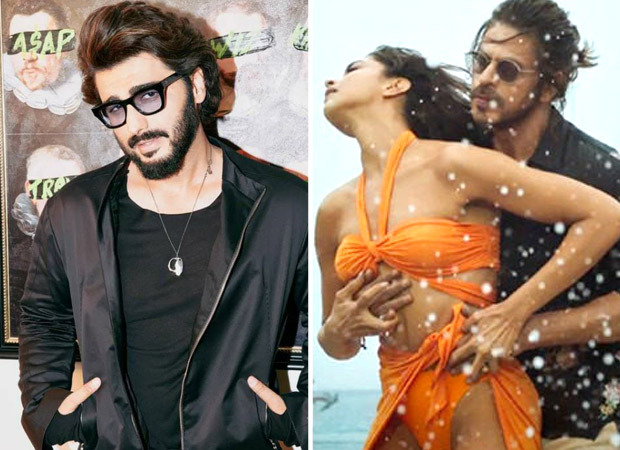 Bollywood actor Arjun Kapoor, who is currently promoting his upcoming film Kuttey, has voiced his opinion on the ongoing controversies surrounding Shah Rukh Khan starrer Pathaan. For unversed, the film has become a target of several outfits due to the saffron colour swimsuit worn by Deepika Padukone in the ‘Besharam Rang’ song. It created an uproar and CBFC has axed certain lyrics and scenes from the song too.

Arjun Kapoor on Shah Rukh Khan-starrer Pathaan controversy: ‘We as artistes have to do what the film demands’

Talking about Pathaan, Arjun Kapoor told India Today, “I think the fact that we are discussing it will give undue advantage to it at this point. We have to trust our censor board and the central government as they operate together. I think everybody has a right to an opinion in a democracy, but we as artistes have to do what the film demands and have to stick to that authenticity. I don’t think we need to get caught up in a question that gives undue importance to things that create unnecessary banter and chatter.”

“Our job should always be to do what is needed for the film and then give the film to the people who can decide what offends them and what doesn’t. I think we have followed that for a long time. Every film that gets made has to follow a process, even if our film is no exception. We should just trust the process and the rules in a democracy,” he added.

On the work front, Pathaan is set to release in theatres on January 25, 2023.

Meanwhile, Kuttey is touted to be a caper that also has outstanding actors like Naseeruddin Shah, Konkona Sen Sharma, Tabu, Kumud Mishra and Radhika Madan in it. The film has been directed by debutant Aasmaan Bhardwaj, who is ace film-maker Vishal Bhardwaj’s son. It releases on January 13, 2023.

ALSO READ: Arjun Kapoor recalls getting a compliment from Naseeruddin Shah for his film Sandeep Aur Pinky Faraar; says that moment is very close to his heart