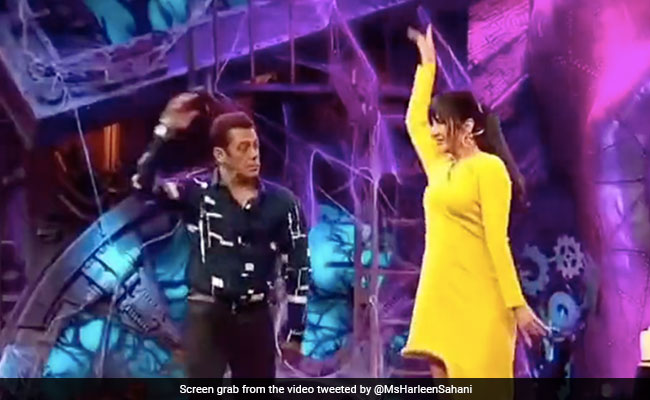 We have a blockbuster reason to watch the upcoming episode of Bigg Boss 16. Any guesses why? Katrina Kaif, Ishaan Khatter and Siddhant Chaturvedi will attend the reality show to promote their film Phone Bhoot. Yes, it will be a Halloween-special episode, where the star cast will give you spooky vibes. But that’s not why Katrina Kaif and host Salman Khan are trending on social media today. The actual reason? The duo danced to the Sooryavanshi song Tip Tip like no one’s watching. Videos and pictures from their dance performance are being widely shared by several fan pages. In one of the clips, Katrina Kaif is seen dancing flawlessly to the peppy track while Salman Khan tries to mirror the hook step.

Another clip shows Katrina Kaif teaching Salman Khan how to ace the signature step of Tip Tip. Salman Khan also says that he would like to spy on Vicky Kaushal if given a chance to become a ghost. When Katrina asks why, Salman Khan replies, “Loving hai, caring hai, daring hai. Uske baare mein baat karta hu, aap blushing hai (he’s loving, caring and daring. You are blushing when I am talking about him).”

Katrina Kaif and Salman Khan have worked together in Bharat, Ek Tha Tiger, Tiger Zinda Hai, Maine Pyaar Kyun Kiya and Partner. Their new film – Tiger 3 – will release on Diwali next year. Along with the actress, Siddhant Chaturvedi and Ishaan Khatter also added fun to the Weekend Ka Vaar episode of Bigg Boss. See pictures of the trio from Salman Khan’s show here:

Calling all the #AsliFans for a Halloween celebration with #KatrinaKaif#SiddhantChaturvedi#IshaanKhatter????