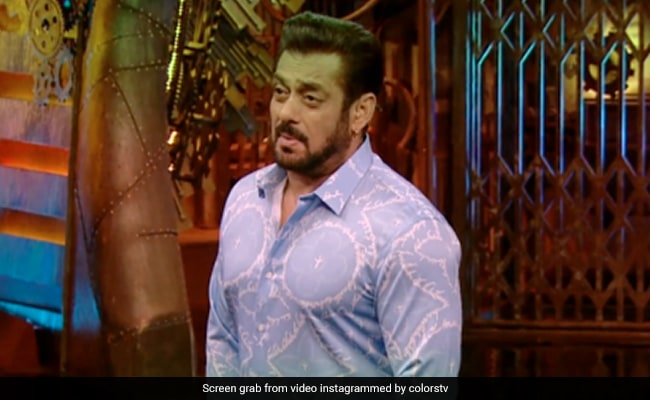 Salman Khan in a still from Bigg Boss 16. (courtesy: colorstv)

TheBigg Boss house is no stranger to love stories. Over the years, several contestants have fallen in love and successfully carried the relationship forward outside the house. But this time around, relationships in the Bigg Boss 16 house are far more complicated. A case in point is the bond between Tina Datta and Shalin Bhanot. What started off as friendship soon turned into something more or so fellow contestants and fans thought. While Tina and Shalin have confessed to having feelings for each other, they also said they are not in love. After fights, they are also seen calling each other names. So when the two were seen dancing with each other during the New Year concert, fans and contestants were left confused.

Now, even Salman Khan has addressed their confusing relationship status, calling it “fake. He also asks Tina Datta if she was using Shalin Bhanot to get ahead in the game. In a new promo, he asks, “Tina, what game are you playing and with whom?” While Tina Datta looks utterly confused, Salman Khan says that there is no “consistency” in their equation, adding that she goes to Shalin Bhanot when she is weak and dumps him when she is strong.

Tina Datta then says that she has told Shalin Bhanot that they cannot fall in love. To this, Salman Khan says, “Abhi toh jhagda kiya tha, jaise hi music baja chipak gaye” (You had just finished fighting but once the music started playing you were sticking with him and dancing).”

Salman Khan also acted out how Tina Datta and Shalin Bhanot were behaving.  Archana Gautam and Soundary Sharma also say that they feel that Tina is using Shalin. Salman Khan says that only Shalin cannot see what is happening.

This week, Priyanka Chahar, Nimrit Kaur, Abdu Rozik, MC Stan and Shiv Thakare are safe from elimination.  Bigg Boss 16 is available for viewing on Colors TV from Monday to Friday at 10 PM. The weekend episodes, which also include Salman Khan’s Weekend Ka Vaar, air at 9.30 PM.  The show is also available on the streaming platform Voot Select.