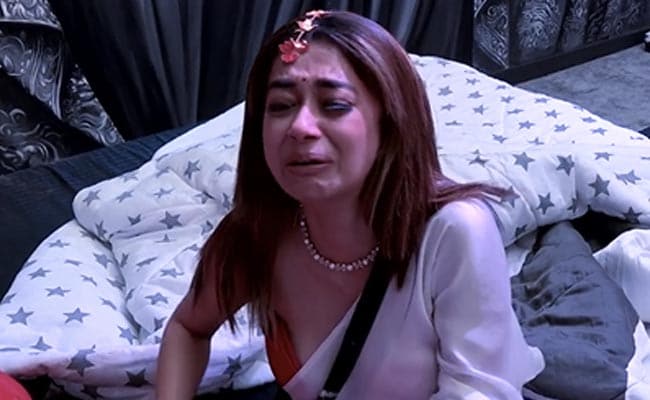 Bigg Boss 16 contestant Tina Datta is clearly not happy inside the house. In the latest episode of Weekend Ka Vaar with Salman Khan, Tina Datta is seen crying and requesting the actor to send her home. Tina tells Salman, “Haar cheez main mujhe blame kiya ja raha hai. Nominations meri wajah se…I want to go home, sir, please. [Everyone is blaming me. It seems everything is happening because of me.] ” In a video released by the makers of the show, Tina Datta is crying in the bedroom area. We can see Priyanka Chahar Choudhry trying to console her. Tina, who continues to sob, tells Priyanka, “When I wasn’t talking about him [Shalin Bhanot] for two weeks no one said anything then. He provoked and I responded then I am wrong? I just want to go home. Tod diya mujhe (I am shattered).”

It all started when Salman Khan schooled Tina Datta for being part of Shalin Bhanot’s game plan outside the house. In another clip released by the makers, Salman tells Tina, “According to you, aapko humsha se pata tha ki Shalin yeh sab plan kar raha hain [You knew everything about Shalin Bhanot’s game plan before entering the house.] Bahar se phone calls huye thay. Mil kar khelengay. [There were calls made outside the house…We will play together.] Now after 15 weeks, when there was a fight between the two of you, you decided to reveal everything.”

Tina Datta, in her defence, says, “I have gathered my broken pieces to fight back sir. Haar cheez mein mere ko blame kiya ja raha hai (I am being blamed for everything). Main ek insaan hoon…Akhir kab tak main aise sehti rahungi. [I am a human being, till when should I tolerate sir?]”

To this, Salman Khan replies, “Haar cheez toh aapne bol di hai, Tina [Datta]. [You have shared each and every detail.] Yeh cheezay apnay aandaar daba kar rakhi kyunki sab kuch theek chal raha tha. Ab jab theek nahi hai toh khol di aapne. [You kept all the details to yourself until everything was going smoothly but then you decided to open up after the fight.”

Tina, who is seen crying, says, “I’m tired. I am done with everything. Haar cheeze ka mere upar blame araha hai (In every matter, I am one who is blamed).”

To catch all the live updates, fans can stream it on Voot Select. The show airs on Colors TV from Monday to Friday at 10 PM.