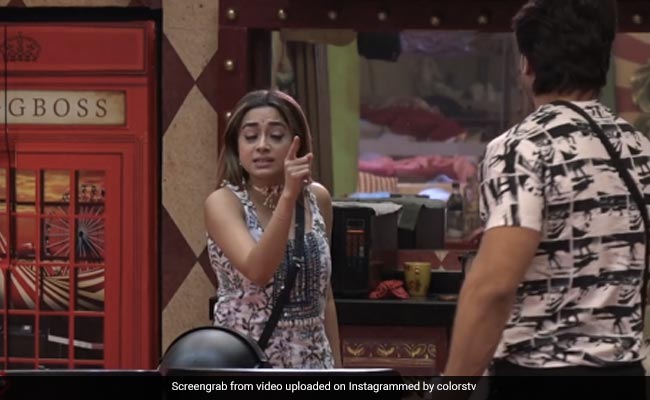 Tina Datta in a still from Bigg Boss 16. (courtesy: colorstv)

The equations among the contestants in the Bigg Boss 16 house are constantly changing. Once friends, Tina Datta and Shalin Bhanot don’t see eye to eye on anything now. As per a recent promo shared by the makers of the reality show, their fight turned ugly after Tina and Shalin made nasty remarks against each other. The argument started in Wednesday’s episode after Shalin extended his support to new captain Nimrit Kaur Ahluwalia, leaving Tina and Priyanka Chahar Choudhary in shock. They claimed that Shalin was the one who was planning against Nimrit becoming the captain. The duo mocked him and accused him of double standards. After being called “dogla (hypocrite),” an irked Shalin Bhanot went on to question Tina Datta’s “dignity.” He accused her of using men as per her convenience, referring to her current bond with MC Stan after she broke ties with him.

After the accusations, Tina Datta lost her cool and raised her hand, threatening to slap Shalin Bhanot. She then referred to the actor’s unfriendly relations with his ex-wife Dalljiet Kaur and said, “Khud ki biwi ki dignity nahi rakhta… ghatiya aadmi (you couldn’t even safeguard your wife;s dignity, you are a filthy person).” Tina also made a comment on Shalin’s married life and said that one who couldn’t respect his own wife should not pass judgment on someone else’s character.

Reacting to this, Shalin Bhanot told Tina Datta that she always thinks less of a bond shared by a man and a woman, referring to his equation with Sumbul Touqeer Khan.  Earlier on the show, Shalin was seen maintaining distance from Sumbul after he was told by Tina that the TV actress has feelings for him.

Tina Datta, Shalin Bhanot, Soundarya Sharma and Sumbul Touqeer Khan have been nominated for the weekend’s elimination round.