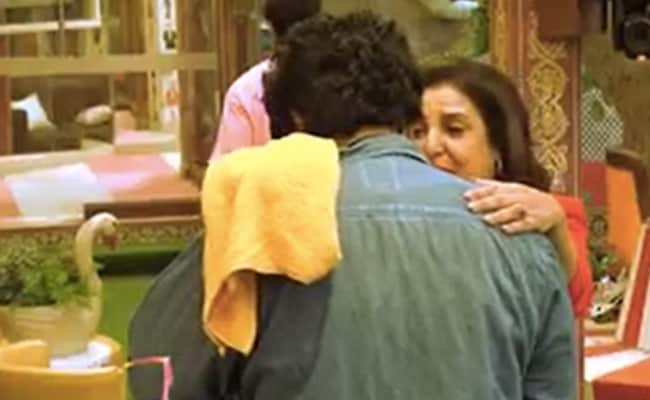 Emotions always run high when it comes to the Bigg Boss house. There is fun, frolic and a lot of fights usually. This week, however, things are bound to get emotional as the family members of the housemates will stay at the Bigg Boss house for a day or two. This reunion with family leaves housemates in tears, promo videos show. A case in point is director Farah Khan, who visited the Bigg Boss house to meet and support her brother Sajid Khan. In the video shared online, Farah is seen hugging Sajid – who is in statue mode as part of a task – and crying. Farah tells him that she has missed him, mummy is proud of him and adds that it has been three months since she saw him in person.

Farah Khan also meets Shiv Thakare, MC Stan and Abdu Rozik. Hugging them, she says that before the show she had one brother, Sajid, but now she has three more brothers. She tells Sajid that he is lucky to have found this “mandali”.

In another video, Farah Khan is also seen hugging Priyanka Chahar and calling her the “Deepika Padukone of the Bigg Boss house.”

A glimpse of this meeting between the siblings was shared on Instagram by ColorsTV. The caption to the video says, “Sajid se milne aayi ghar mein Farah Khan. (Farah Khan has come to meet Sajid in the house).”

A few days ago, Sajid Khan And Shiv Thakare were seen discussing how Bigg Boss is biased towards Archana Gautam. They point out that Archana has had fights with everyone in the house. She was also evicted temporarily for attacking Shiv physically. The two are seen discussing Archana’s behaviour after her massive fight with MC Stan.

While Sajid Khan tells MC Stan that both Archana and he were wrong, MC Stan argues that Bigg Boss is on Archana’s side. Sajid agrees with this observation and Shiv explains that Archana’s mistakes are often ignored. Sajid adds that this has been happening for a long time.

Bigg Boss 16 is available for viewing on Colors TV from Monday to Friday at 10 PM. The weekend episodes, which also include Salman Khan’s Weekend Ka Vaar, air at 9.30 PM.  The show is also available on the streaming platform Voot Select.