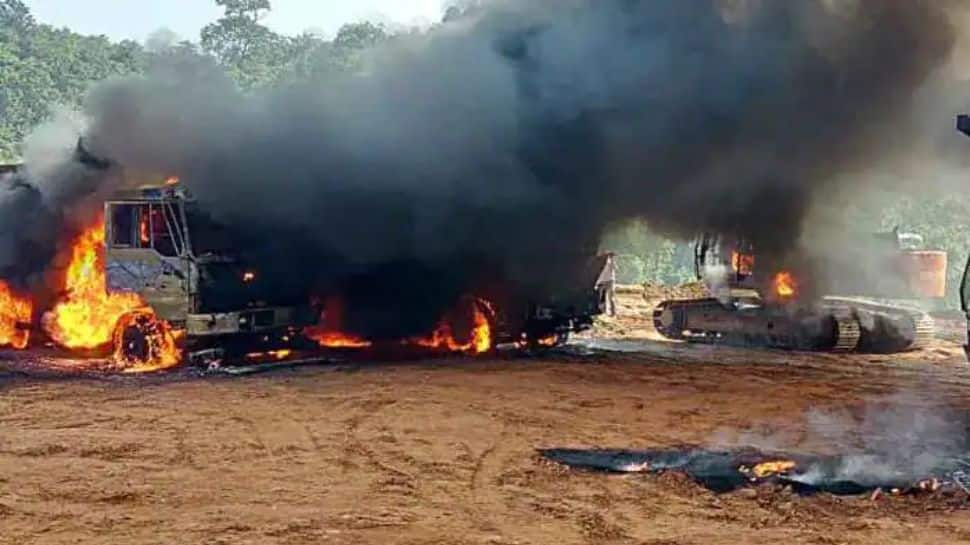 Kanker (Chhattisgarh): A group of Naxalites set fire to as many as five vehicles and four mobile towers in Atangarh assembly limits of Chhattisgarh`s Kanker district on the intervening night of Sunday and Monday, an official said. Besides, the Naxals also blocked the Antagarh-Narayanpur state highway by cutting down five trees in the Tadoki police station area, according to Kanker Superintendent of Police (SP) Shalabh Sinha, who has confirmed the news of the incident. According to SP Shalabh Sinha, the Naxals carried out as many as eight incidents in Antahgarh town last night. They burned the PV-45 Jio mobile tower in the Koyalibeda area and also set fire to other Jio towers in Jiram Terai area, in Sirsangi of Antagarh area and in Badrangi.

Naxals also spread pamphlets in the Durgukondal police station area demanding to make North Bastar Division (Kanker, Narayanpur, Kodagaon) shutdown successful. It is written in the poster, “Make North Bastar Division shutdown successful in the protest against the killing of Comrade Darshan, Jagesh in a fake encounter on November 22. We will take the revenge of comrades killed in the fake encounter.”

On the other hand, Bastar Inspector General of Police (IG) P Sundarraj said, “In reaction to the death of DVCM Darshan Padda in the last month`s encounter, Naxals have called for a bandh (shutdown) call in North Bastar Division area.

Out of desperation, they have made soft targets, including public utility facilities like mobile towers etc.”Meanwhile, the blockage on the road and highway has been removed. Further investigation into the matter is underway, the official added.