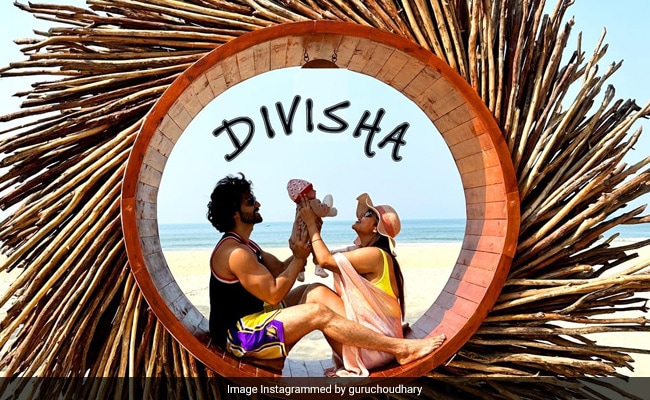 TV stars Debina Bonnerjee and Gurmeet Choudhary, who welcomed their second child, a daughter in November last year, shared a super cute post on Tuesday afternoon. The couple revealed in the post that they have named their daughter Divisha. Debina posted a picture from a beach in Goa. In the picture, the actors can be seen holding their baby daughter in their arms. Debina Bonnerjee captioned the post: “Our Magical baby is named as “Divisha” which means Chief of all Goddess/Goddess Durga.”

See the post shared by Debina and Gurmeet here:

The couple welcomed their daughter in November last year. They announced the news of their daughter’s arrival with this post. The caption read: “Welcome our baby girl into the world. As ecstatic as we are becoming parents again, we appreciate some privacy at this time as our baby has come into the world sooner than due. Keep blessing and showering your continued love.”

Gurmeet Choudhary and Debina Bonnerjee’s love story began on the sets of the 2008 television series Ramayan, in which he played the role of Lord Ram and Debina co-starred as Sita. After few years of dating, Gurmeet and Debina got married in a private ceremony in 2011. The couple also participated in the TV reality shows Pati Patni Aur Woh and Nach Baliye 6. The couple welcomed their baby girl Lianna in April last year.

Gurmeet has starred in TV shows like Geet – Hui Sabse Parayi and Punar Vivah, while Debina played the antagonist in the TV show Santoshi Maa. Gurmeet made his Bollywood debut in Khamoshiyan and later starred in Wajah Tum Ho.