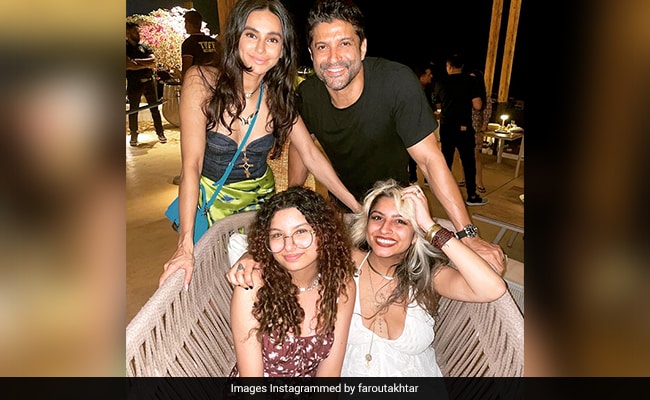 Farhan Akhtar‘s latest post is all things nice. The actor-filmmaker was vacationing with his wife, VJ-actress Shibani Dandekar, as well as with his daughters Shakya and Akira in Goa. On Saturday, Farhan picked a priceless photo of himself, Shibani and his children from the holiday album to share online. No caption needed. Farhan is seen wearing a black tee while Shibani looks chic in a black and green outfit. Akira and Shakya are look gorgeous in brown and white outfits in the photograph. Alongside the photo, Farhan Akhtar dropped three heart icons. Reacting to the snap, filmmaker Farah Khan posted red heart emojis in the comments section.

Farhan Akhtar and Shibani Dandekar were vacationing in Goa with her sister, VJ-actress Anusha Dandekar, Dolly Sidhwani, Amrita Arora, Kim Sharma and Ujjwala Raut. Several glimpses of their getaway trended big time on social media earlier this week. Recently, Farhan Akhtar shared a photo and a video from his Goa diaries. “Swipe to reveal #longexposure #Goa,” he wrote in the caption. Amrita Arora was quick to react as she commented, “What a trip it was.” See his post here:

Shakya and Akira Akhtar are Farhan Akhtar’s daughter with his ex-wife Adhuna Bhabani. The actor married Shibani Dandekar last February, after dating for a couple of years.

On the work front, Farhan Akhtar is known for his performances in movies like Rock On!!, Zindagi Na Milegi Dobara, Dil Dhadakne Do, The Sky Is Pink and Bhaag Milkha Bhaag. He has also directed films like Lakshya and Dil Chahta Hai.