While Tesla (NASDAQ: TSLA) is the leader in electric vehicles (EV), other aspects of its business also promote the use of clean energy. Its solar roof panel and energy storage segment represented about 5% of revenue in the third quarter, generating more than $1.1 billion.

As traditional automakers like Ford (NYSE: F) and General Motors (NYSE: GM) work to build their electric vehicle lineups, they, too, are trying to expand the use of clean energy. But those companies are taking a different approach, and it gives investors another angle to play in the growing EV sector.

Auto manufacturers are now looking not just to build electric-powered vehicles; they are also looking upstream to seek sustainability in what goes into building those vehicles. The average vehicle contains almost 2,000 pounds of steel, making it a large market for the steel industry.

Steelmaking has long been thought of as a dirty, smokestack industry. But Nucor (NYSE: NUE) pioneered the electric arc furnace (EAF) method of steelmaking in the 1980s and has built a hugely successful business using that technology. Steel Dynamics is another company that emerged using EAFs and was founded by former Nucor employees. Other steel companies, including U.S. Steel, are also transitioning to EAF production now.

That technology uses mostly recycled content for steel production. Nucor recycled more than 23 million tons in 2021, supplying more than three-fourths of its production needs. But the North American leader has also been working to further reduce the greenhouse gas (GHG) intensity of its operations, and it hopes to eventually produce net-zero-emission steel at scale.

One approach it has taken is being noticed by customers, including Ford and GM. Late last year, Nucor introduced a new product that it says is the world’s first net-zero-emission steel. General Motors became the first customer for what Nucor dubbed Econiq.

Nucor has established its Econiq certification and made it available across its product line. The company says it “signifies that the steel is produced with 100% renewable energy to offset Scope 2 emissions and that Scope 1 emissions are countered through the purchase of carbon offsets.”

Scope 1 emissions include those directly created from the company’s operations. Nucor has addressed Scope 2 emissions — indirect GHG emissions related to purchasing energy for steelmaking and processing — by establishing several virtual power purchase agreements with wind and solar energy generators that serve its facilities.

Scope 3 emissions are not part of the certification since those emissions are the result of activities from assets not owned or controlled by the steelmaker. But Nucor has still committed to work to reduce and disclose much of its Scope 3 emissions. And it’s not just General Motors willing to pay a premium for green steel from companies like Nucor.

Heating, ventilation, and air conditioning (HVAC) and refrigeration company Trane Technologies has also announced plans to buy Econiq from Nucor as its primary supplier of low-emissions steel. The company will also supplement its supply with U.S. Steel’s new version called verdeX for its U.S. operations. Trane says the steel will go into manufacturing high-efficiency heat pumps and air conditioners for homes and thermal management systems for commercial buildings. The green steel agreements will represent 20% of its total annual steel purchases, according to the company.

Ford has now joined the movement as well. Ford just signed a memorandum of understanding (MoU) with the European subsidiary of India-based Tata Steel for the supply of its net-zero carbon steel. Tata’s approach to zero-carbon steel is to replace the use of carbon with hydrogen as part of the steelmaking process. Its plant in the Netherlands is working to build that practice to scale, and Ford is at the front of the line for its use.

Another kind of green

With these automakers pushing up the supply chain to achieve their sustainability goals, Nucor and others become viable potential investments to participate in EV sector growth. It’s fair to note the volumes of these green steel offerings won’t make a big impact on the companies’ top and bottom lines anytime soon. But there are many other reasons to invest in steel leader Nucor as the renewable business grows, and that can make investors another kind of green.

The automotive business still only represents 7% of Nucor’s volume. The construction sector remains its main driver, with 55% of its business. But Nucor isn’t just focused on its green steel offering. It will also be an important supplier of the infrastructure needed in the transition to renewable energy. In a recent presentation for investors, Nucor offered more detail on how it will participate.

Nucor aims to leverage sustainability trends to create new opportunities, expand its capabilities, and grow market share in the automotive, construction, and energy sectors. And the company has been using its strong cash flow to give shareholders a larger piece of those opportunities.

In its recently reported third quarter, Nucor showed just how much its stock buybacks reduced its outstanding share count. As part of its aim to return a minimum of 40% of earnings to shareholders, Nucor has repurchased 20% of its shares over the last five years. 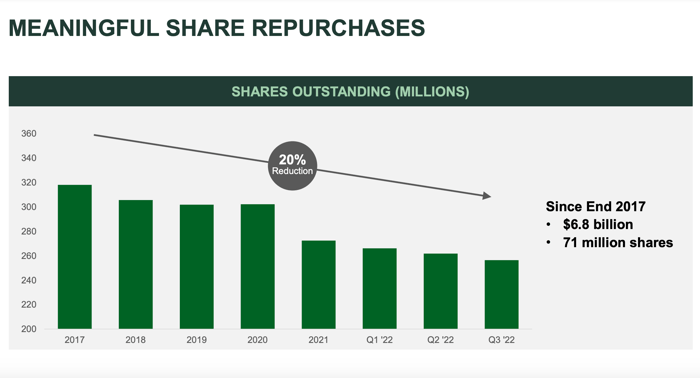 Nucor also expects 2022 to be another record-profit year. Steel prices have contributed to that, but they have dropped recently. Those selling prices are still at high levels, however, and Nucor has several projects coming online in the near future. That includes a new state-of-the-art plate mill in Kentucky that will open up new markets for the steelmaker, including wind turbines.

Nucor isn’t just leading the industry in introducing green steel. Importantly for investors, it is also leading in profits. That gives investors several good reasons to buy the stock.

10 stocks we like better than Nucor
When our award-winning analyst team has a stock tip, it can pay to listen. After all, the newsletter they have run for over a decade, Motley Fool Stock Advisor, has tripled the market.*

They just revealed what they believe are the ten best stocks for investors to buy right now… and Nucor wasn’t one of them! That’s right — they think these 10 stocks are even better buys.