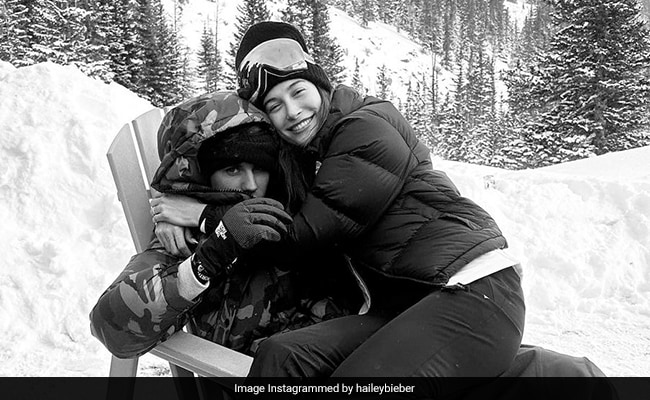 Hailey Bieber loves to keep it real on social media and this is one of the reasons behind her ever-growing fanbase. The model-entrepreneur often shares glimpses of her eventful life on social media. Now, Hailey has treated fans to a collection of heart-warming images that she has described as her “holiday dump”. While some of the images featuring Hailey alone – looking fabulous, might we add – the carousel also has a photo of some freshly baked doughnuts. Wondering if Justin Bieber makes an appearance? We are happy to report that he does. In the photo, Hailey is sitting on Justin’s lap in a chair surrounded by snow-capped mountains. In the caption, she said: “Holiday Dump  Best times. best friends. Happy New Year,” with heart and sparkle emojis.

On Christmas, Hailey shared some stunning photos and videos of herself and added Christmas trees and Santa emojis.

Hailey Baldwin had a challenging 2022 on the health front after she suffered a stroke in March. She spoke about the incident in a detailed video that was shared on YouTube. She described the symptom of the stroke as a “weird sensation” that went from her shoulder to her fingertips during breakfast. This was followed by the drooping one side of her body. “Basically, they did some scans and were able to see that I suffered a small blood clot to my brain, called a TIA. It’s like having a mini-stroke. It feels like having a stroke, except my body was able to resolve it pretty quickly and then I didn’t have any more issues,” she said in the detailed video.

Hailey is the daughter of actor Stephen Baldwin. Her uncle is actor Alec Baldwin. She began her modelling career at the age of 16 and has worked for brands such as  Calvin Klein, Ralph Lauren, and Tommy Hilfiger.  She has been married to Justin Bieber since 2018.