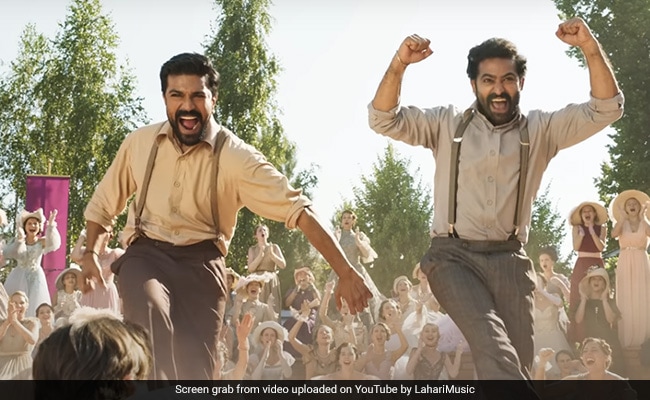 Cinema lovers across India cannot stop gushing about RRR’s win at the Golden Globes. The film won an award in the Best Original Song category for the track Naatu Naatu, composed by MM Keeravani and picturised on Jr NTR and Ram Charan. Congratulatory messages are flowing in from all quarters for team RRR. Now, superstar Chiranjeevi, actor Ram Charan’s father, has shared a special message for MM Keeravani and the film’s cast and crew. Sharing images featuring MM Keeravani on stage at the award ceremony, Chiranjeevi wrote, “What a Phenomenal, Historic  Achievement. Golden Globes Best Original Song – Motion Picture Award to MM Keeravani garu. Take a Bow. Heartiest Congratulations Team. He tagged director SS Rajamouli and added, “India is proud of you,” with the hashtag Naatu Naatu.

Sharing a screenshot of the song along with images of SS Rajamouli, Ram Charan and Jr NTR on the red carpet, and MM Keeravani holding his trophy, Chiranjeevi wrote, “Naatu Naatu is all about the celebration of Music and Dance. India and the world are dancing with you today!! Kudos to Jr NTR, Ram Charan, Chandrabose for the fabulous lyrics! Kaala Bhairava and Rahul Sipligunj. Danayya garu  @DVVMovies.”

#NaatuNaatu is all about the celebration of Music ???? & Dance ????
India & the World is dancing with you today!!

It was not just Chiranjeevi who shared a message on the happy occasion. Ram Charan’s wife Upasana Konidela, who was present at the ceremony with her husband, shared images from the event and wrote, “Such an honour to be a part of the RRR family. Proudly representing and winning for Indian Cinema. Thank you, Mr C [Ram Charan] and SS Rajamouli Garu for making me part of this journey. From shooting in Ukraine to the Golden Globe Awards, you have taught me that clarity of thought, hard work and perseverance pays off.”

Upasana Konidela is expecting her first child with Ram Charan and referring to this, she added, “I am sooo happy my baby can experience this along with me. I am soooooo emotional.” Replying to the post, actress Namrata Shirodkar – wife of actor Mahesh Babu –  said, “Can’t be happier for you.”

RRR, set in the 1920s is a fictitious story that follows two legendary freedom fighters, Alluri Seetharamaraju and Komaram Bheem. In addition to the Golden Globes, RRR has submitted itself for consideration in various Oscar categories. The film also features Ajay Devgn and Alia Bhatt in supporting roles.