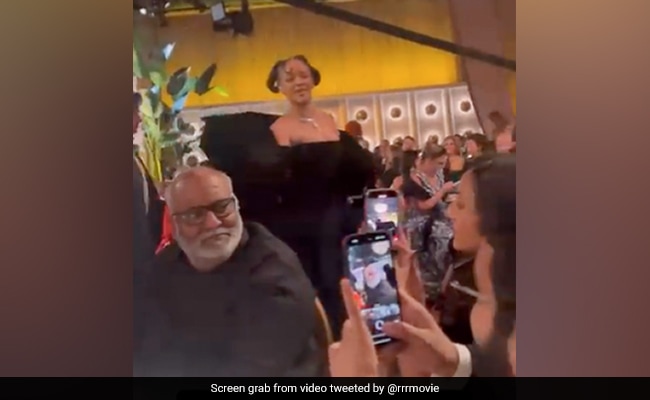 Golden Globes: MM Keeravani and Rihanna in a still from the video. (courtesy: rrrmovie)

The Golden Globe Awards are over but Naatu Naatu fever is here to stay, thanks to its big win at this year’s Golden Globe Awards. The track from RRR, composed by MM Keeravani, won the Best Song at the prestigious award ceremony. Rihanna, nominated for the Black Panther: Wakanda Forever track Lift Me Up, lost to Naatu Naatu. However, she walked by the RRR table and congratulated the team during the Golden Globes. Team RRR, flooded with congratulatory messages from across the world, also thanked Rihanna on Thursday. The makers shared a video of Rihanna congratulating MM Keeravani and the RRR family after their Naatu Naatu win and they thanked her for congratulating them at the ceremony. “Thank you Rihanna. #GoldenGlobes #RRRMovie,” wrote the makers thanking the icon.

Other nominees in the Best Song category were Taylor Swift’s Carolina from Where The Crawdads Sing, Ciao Papa from Guillermo del Toro’s Pinocchio, Lady Gaga’s Hold My Hand from Top Gun: Maverick.

Let’s also look back at the time Naatu Naatu won the Best Song. The award was presented by Wednesday star Jenna Ortega.

After RRR‘s big win, the film’s director SS Rajamouli tweeted this: “Speechless. Music truly knows no boundaries. Congratulations and thank you PEDDANNA for giving me Naatu Naatu. This one is special. I thank each and every fan across the globe for shaking their leg and making it popular ever since the release #GoldenGlobes.”

Congratulations & thank you PEDDANNA for giving me #NaatuNaatu. This one is special.:)

I thank each & every fan across the globe for shaking their leg & making it popular ever since the release#GoldenGlobespic.twitter.com/cMnnzYEjrV

At this year’s Golden Globes, team RRR  was represented by its director and stars – SS Rajamouli, Jr NTR and Ram Charan who was accompanied by wife Upasana Kamineni. The film was also nominated in the Best Non-English Language Film category. However, Argentina, 1985 from Argentina won in that category.