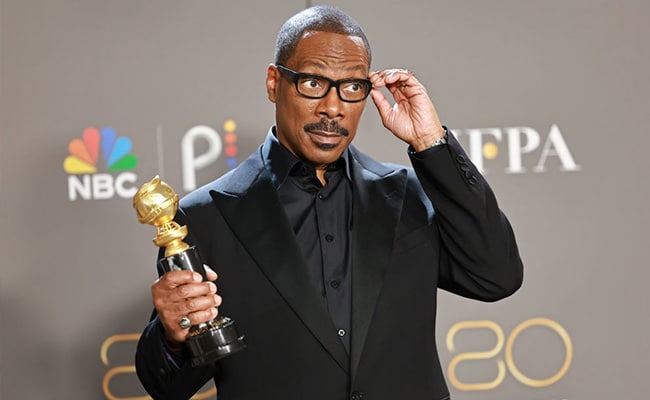 Eddie Murphy was honoured with the Cecil B. DeMille Award at the Golden Globes. Given Eddie Murphy’s body of work as an actor, comedian, writer, producer, and singer, the audience was all ears when it came to his acceptance speech. Eddie Murphy cracked everyone up with a joke on Will Smith and the slapgate at last year’s Oscars. He said, “I want to let you know that there is a definitive blueprint that you can follow to achieve success, prosperity, longevity and peace of mind,” as the room listened in rapt attention.  Eddie Murphy added, “It is a blueprint and I have followed it my whole career. It is very simple, just do these three things: pay your taxes, mind your business and keep Will Smith’s wife’s name out of your f***ing mouth!” leaving the audience in splits.

A video of the acceptance speech was shared online by the official Twitter handle of the Golden Globe Awards. The caption read, “The biggest round of applause for Eddie Murphy, this year’s Cecil B. DeMille Award recipient! Your decades of unbeatable comedy and incredible performances deserve to be acknowledged and celebrated!

???? The biggest round of applause for Eddie Murphy, this year’s Cecil B. DeMille Award recipient! Your decades of unbeatable comedy and incredible performances deserve to be acknowledged and celebrated! ???? #GoldenGlobespic.twitter.com/IWiU6LEmmf

Eddie Murphy was referring to the infamous incident at the Academy Awards last year when Will Smith walked on stage and slapped host and comedian Chris Rock for making a joke about his wife, Jada Pinkett-Smith. It all began when Chris Rock, who was on stage, made a joke comparing Jada Pinkett Smith to G.I. Jane because of her shaved head. Jada Pinkett-Smith suffers from alopecia, a medical condition that causes hair fall.

The comment, however, did not go down well with Will Smith who walked on stage, slapped a surprised Chris Rock and returned to his seat. He then yelled, “Keep my wife’s name out of your f*****g mouth.” While Chris Rock continued the show despite being struck and visibly shaken, other actors such as Denzel Washington had to intervene to assuage all parties involved.

Subsequently, Will Smith issued an apology to Chris Rock. In an Instagram video, the Hollywood star, who won the Best Actor award for King Richard, explained why he did not apologise in his acceptance speech. “’Why didn’t you apologise to Chris [Rock] in your acceptance speech?’ I was fogged out by that point. It was all fuzzy. I’ve reached out to Chris [Rock] and the message that came back is that he is not ready to talk. When he is, he will reach out. So I will say to you, Chris [Rock]. I apologise to you. My behaviour was unacceptable and I am here whenever you are ready to talk,” Will Smith said. He also resigned as a member of the Academy. After the slapgate incident, the Academy banned Will Smith from attending the award ceremony for the next 10 years.

Meanwhile, Cecil B. DeMille award is an honour presented since 1952 to prolific filmmakers and performers in the entertainment industry Eddie Murphy received the award from his former co-stars Tracy Morgan and Jamie Lee Curtis.

Eddie Murphy, an Academy Award nominee and Golden Globe winner, is known for his work in films such as Daddy Day Care,Trading Places, Coming to America, Beverly Hills Cop and Doctor Dolittle, among others.

Tamannaah, Vijay Varma, Shriya Saran And Others At An Award Show