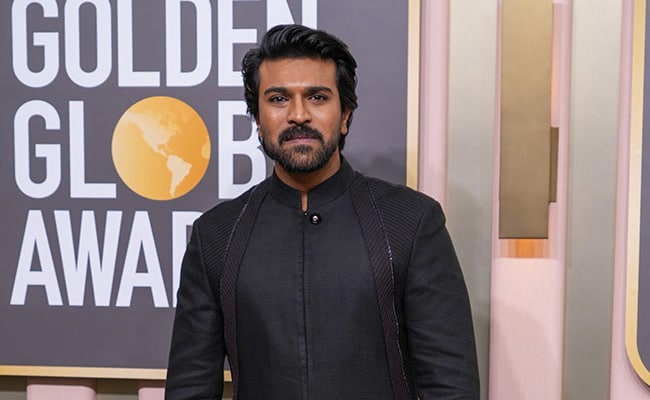 Today is RRR‘s day and everyone, including us, is super happy. The high-octane number Naatu Naatu, by MM Keeravani,is making all the right noises (once again). After all, it won the Best Original Song award at the Golden Globes 2023. If you ask us to describe the win in one word, we would call it memorable. Not many would disagree that Ram Charan and Jr NTR kept us glued to the screens with their electrifying energy and killer dance moves. Be it the beats or the hook step, Naatu Naatu made us groove.Well, it is not just us, Ram Charan also shares a similar feeling.  So much so that his “knee still wobbles” whenever he thinks about the track. Speaking at the red carpet, Ram Charan said, “In India, everything is so musical…And, talking about the song my knees still wobble. It is the most difficult song we did and I guess it all paid off. And, why my director [SS Rajamouli] pushed both Jr NTR and me to do what we did in that song…And, look where we are here  talking to you on this red carpet.”

Talking about the journey, Ram Charan added, “I am still digesting this whole journey from India to Los Angeles. The Mecca of films…It is heartwarming. It is overwhelming. I am slowly grasping everything now.”

Ram Charan’s wife Upasana Konidela has also shared a series of images from her Golden Globes album. The mother-to-be also wrote a heartwarming note dedicated to director SS Rajamouli and the entire team of RRR. It read, “Such an honour to be a part of the #RRR family. Proudly representing and winning for Indian Cinema. Thank you Mr.C [Ram Charan] and SS Rajamouli Garu for making me part of this journey. From shooting in Ukraine to the Golden Globe Awards you have taught me that clarity of thought, hard work and perseverance pays off. I am sooo happy my baby can experience this along with me.  I am soooooo emotional.”

Jr NTR too came up with a special mention post for MM Keeravani. The actor said that Naatu Naatu will always stay close to his heart. The caption read, “Congratulations Sirji on your well-deserved #GoldenGlobes award. I’ve danced to many songs throughout my career but #NaatuNaatu will forever stay close to my heart… #mmkeeravani #rrrmovie.”

Congratulations & thank you PEDDANNA for giving me #NaatuNaatu. This one is special.:)

I thank each & every fan across the globe for shaking their leg & making it popular ever since the release????#GoldenGlobespic.twitter.com/cMnnzYEjrV

The other nominees in the Best Original category were Taylor Swift’s Carolina from Where The Crawdads Sing, Ciao Papa from Guillermo del Toro’s Pinocchio, Lady Gaga’s Hold My Hand from Top Gun: Maverick and Lift Me Up from Black Panther: Wakanda Forever.