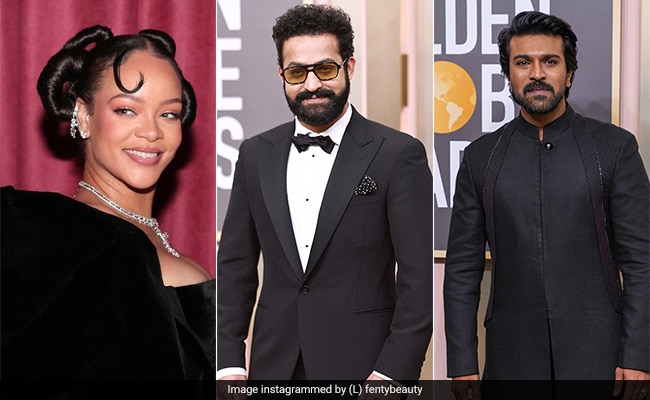 A still from the video and Jr NTR, Ram on the red carpet. (courtesy: fentybeauty) (Pic Credit: Getty)

Pop icon Rihanna is all things classy. The singer proved it yet again when she congratulated team RRR, her competitors in the Best Original Song category at Golden Globes, for their win. The SS Rajamouli film made the nation proud by winning the award for the superhit track Naatu Naatu.  In the now viral behind-the-scenes moment from the award night, Rihanna and her rapper boyfriend A$AP Rocky are seen walking past team RRR‘s table. The singer turns to congratulate the team she lost to and even waves at Ram Charan, who waves back as Rihanna walks away. Naatu Naatu, composed by MM Keeravani, features Jr NTR and Ram Charan. The song, which is a fan favourite across the globe, was nominated alongside Taylor Swift’s Carolina from Where The Crawdads Sing, Ciao Papa from Guillermo del Toro’s Pinocchio, Lady Gaga’s Hold My Hand from Top Gun: Maverick and Lift Me Up, by Rihanna, from Black Panther: Wakanda Forever.

THIS! Rihanna has such class. As she and Rocky walk by (I think to the bathroom) Rihanna congratulates the RRR table for their best original song win for Naatu Naatu in her category. pic.twitter.com/8CM2seXFVd

Naatu Naatu is the first Asian song to win the Golden Globe honour. MM Keeravani in his acceptance speech thanked the team of RRR and his wife MM Srivalli. He said, “Thank you very much HFPA for this prestigious award, Golden Globe. I am very much overwhelmed with this great moment happening and I am very happy to share this excitement with my wife, who is sitting right there.”

Thanking the team, MM Keeravani continued, “It has been an age-old practice to say that this award actually belongs to someone else. So I was planning to not say those words when I get an award like this, but I’m sorry to say I’m going to repeat the tradition because I mean my words. This award belongs to – in order of priority – my brother and director of the film SS Rajamouli for his vision. I thank him for his constant trust in my work and support.”

Here’s how SS Rajamouli, Jr NTR, Ram Charan, and others reacted to the winning moment.  The tweet was shared with the note, “And the Golden Globe Award For Best Original Song Goes To #NaatuNaatu #GoldenGlobes  #GoldenGlobes2023  #RRRMovie.”

RRR missed out in the Best Non-English Language Film category to Argentina, 1985.

RRR, which has been produced by DVV Entertainment,  also stars Alia Bhatt and Ajay Devgn in pivotal roles. The film has collected  ₹1,200 crore worldwide.

Any Given Sunday At Amitabh Bachchan’s Mumbai Residence