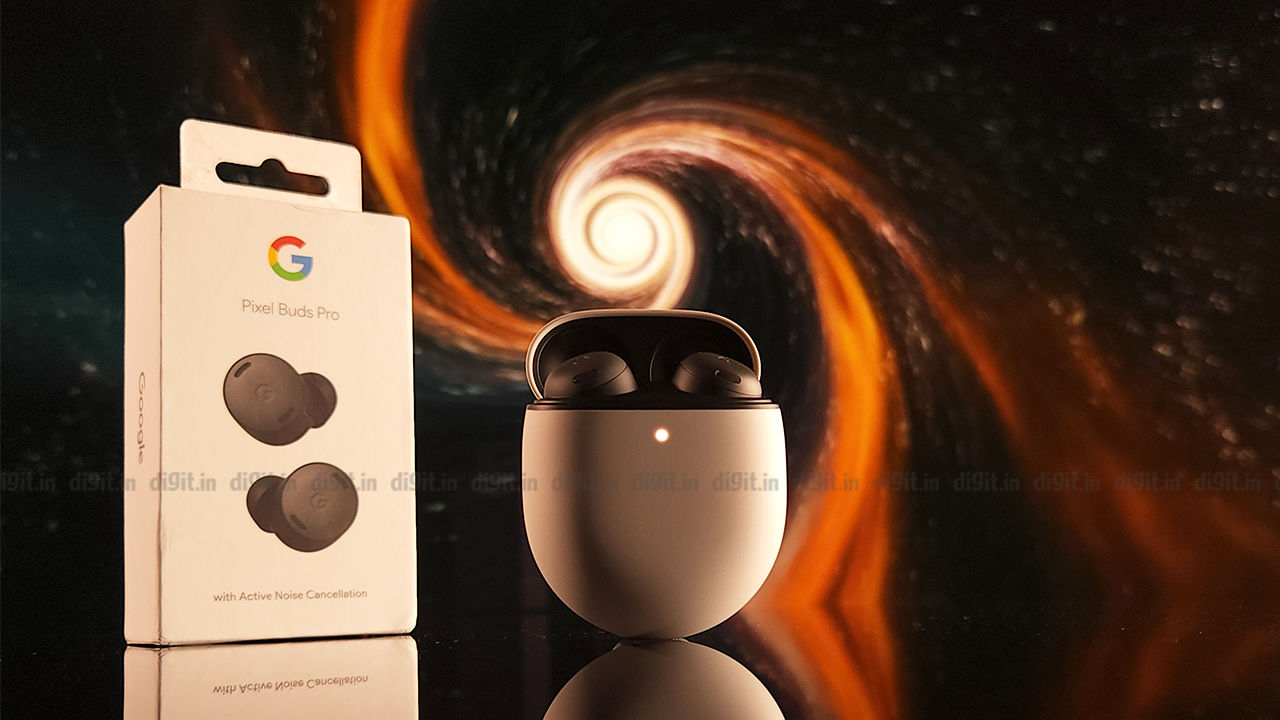 The Google Pixel Buds Pro looks nearly identical to the original Pixel Buds and the newer Pixel Buds A-series (review). It has a Tamagotchi-esque charging case with Qi wireless charging support. The case is pocketable and looks premium enough. The egg-like oval design also stands out amidst the crowd of similarly-designed TWS cases in the market. The oval case houses the USB-C charging port at the bottom, an LED indicator on the front, and a pairing button at the back.

A simple flick of a thumb will open up the case with ease, which we really appreciate. The case is also extremely compact and will slip into most pockets and purses with ease. The case’s hinge seems robust enough but isn’t reinforced with metal, so the durability may not be the best in this price range. 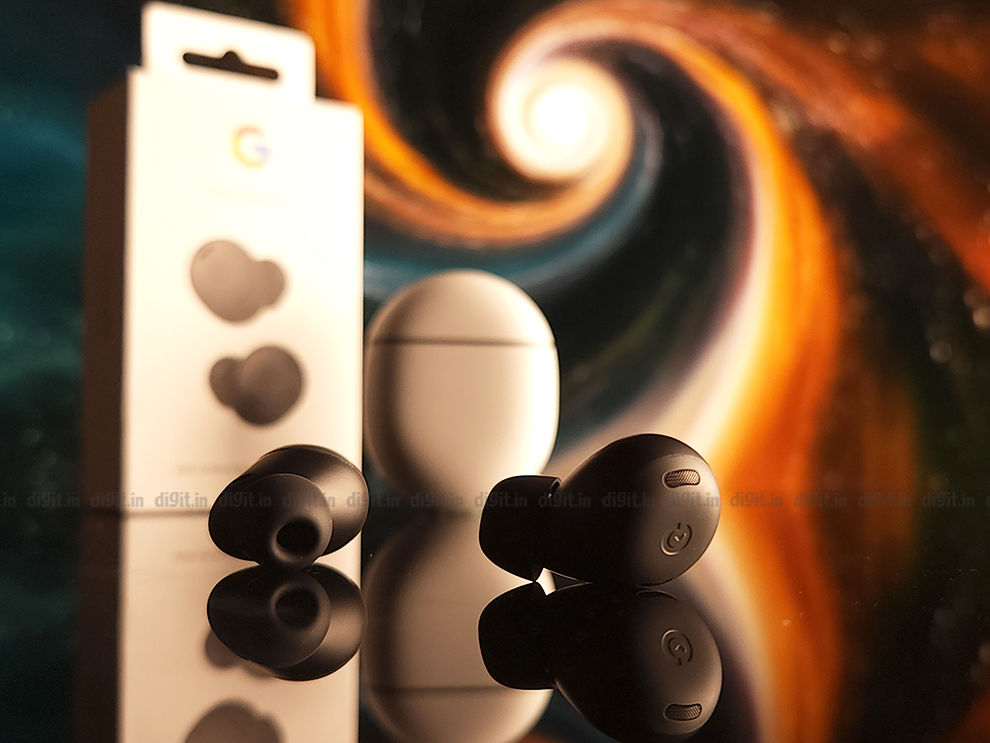 The buds themselves are diminutive in size and quite lightweight, however, they lack the silicone extensions or wings that were present on the Buds A-Series. This means they don’t feel as snug in the ear as the Buds A-Series. We wouldn’t be comfortable going running with these buds because they do feel like they may slip out accidentally. There are three sizes of ear tips provided – S, M, and L – but none of them gave the reviewer a tight, snug fit like what you get from the premium Jabra and Apple TWS earphones. 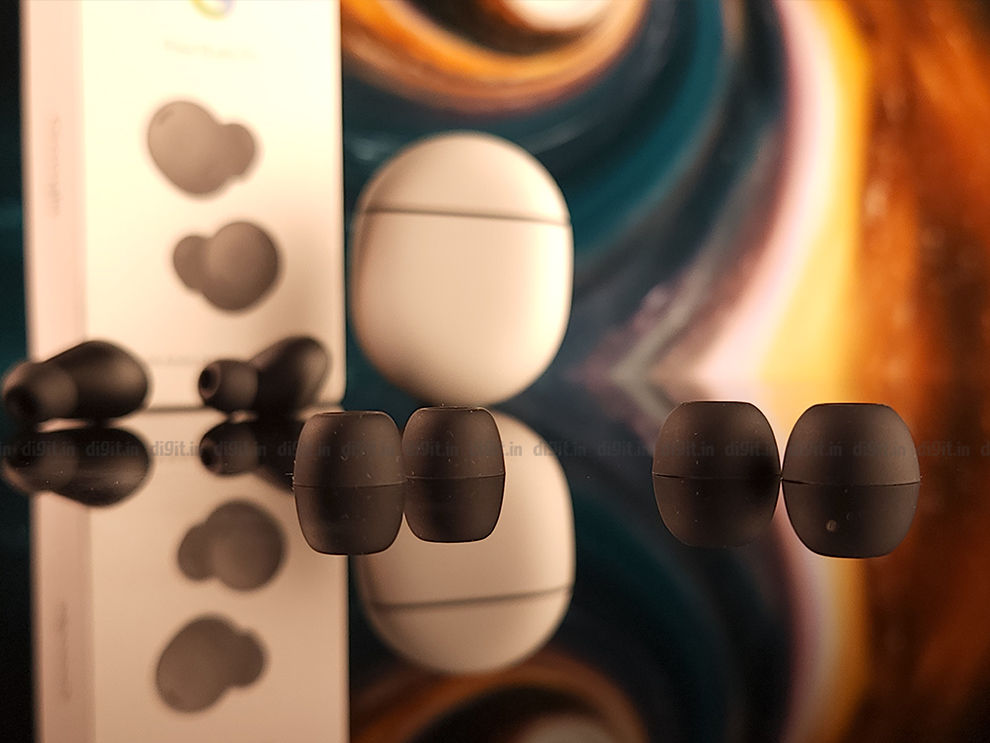 The buds have a matte texture and dual-tone design that makes them look aesthetically pleasing though. The back of the bud houses the Google logo and the capacitive touch sensor. The touch controls respond well but there are a few misinterpretations from time to time. You also get IPX4 water resistance on the earbuds and an IPX2 rating on the case, which is fantastic.

The Google Pixel Buds Pro is adequately feature-rich, but not as feature-rich as a TWS should be when it’s priced at almost ₹20K and competes with all the segment leaders. The onboard controls are incredibly intuitive and Google has even included swipe volume controls, something that is often missing on even premium TWS earbuds in our experience. Unfortunately, though, the earbud controls are not fully customisable via the Pixel Buds app, which is quite disappointing. You can only customise the long-press control to switch between Voice Assistant or Noise Cancellation control.

Speaking of the Pixel Buds app, you can use it to access various features such as checking battery levels, performing firmware updates, checking ear tip fit (which seems to be broken because it always says good fit, for some reason), setting up handsfree Google Assistant, and toggle features such as Audio Switching, Volume EQ, and others. It has Multipoint connectivity which allows you to connect two devices simultaneously and Audio Switching is a new feature that can intelligently switch between Android phones and tablets. Both features worked without a glitch during our testing period and are extremely convenient. 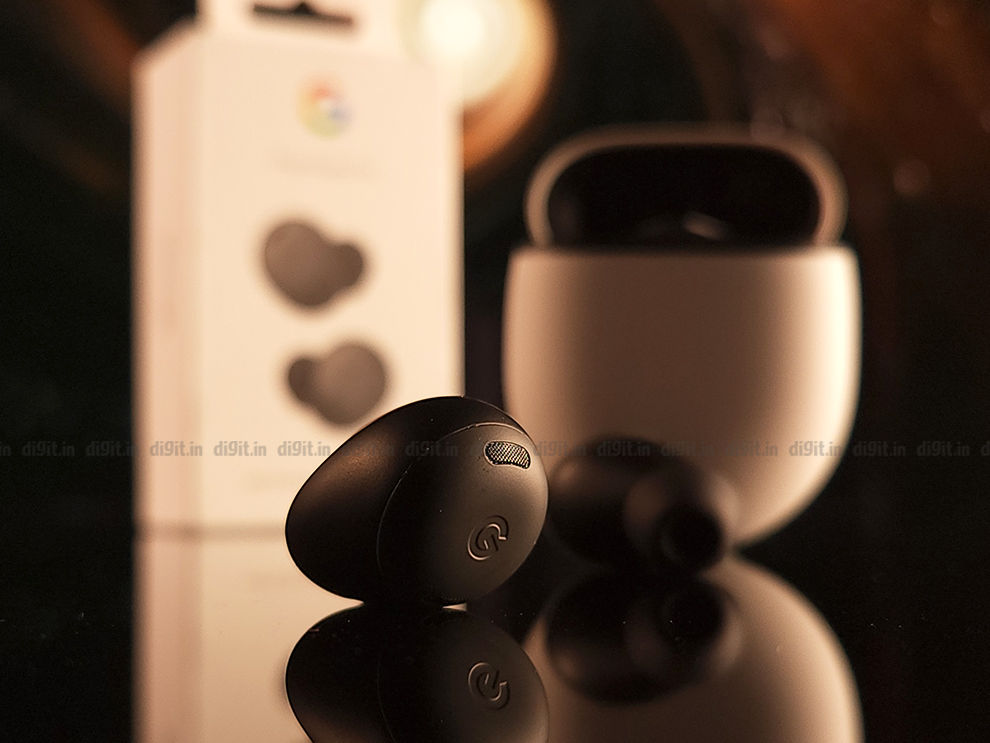 Sadly, there are no customisable EQ or EQ presets available, which is very disappointing. The app only features something called Volume EQ that adjusts the frequencies automatically depending on the volume levels to maintain a balanced, consistent sound signature irrespective of volume levels. The app is not available for iOS devices though, so you will have to make do with the buds’ default settings if you’re using them with an iOS device. Also, Pixel phones can access the app’s settings by just going to Settings > Connected devices, and then tapping the gear icon next to the Pixel Buds Pro name.

Other features include Google Fast Pair support, in-ear detection for auto pause and play, Find My Earbuds feature, IPX4 water-resistant earbuds and IPX2 water-resistant case. According to Google, spatial audio is coming soon as well but we’ll only be able to comment on that when we get the update in the future.

Of course, it also comes equipped with Active Noise Cancellation and Transparency Mode. Google introduced something called ANC with Silent Seal. Silent Seal is a technology that adapts to your ear shape and delivers noise-cancelling that best suits your individualist ear shape. The earphones also house sensors that measure the pressure in your ear canal and work to relieve it as much as possible. We found the ANC to be pretty effective – especially with low-end, constant sounds such as an AC’s hum or airplane’s drone. Higher-frequency sounds aren’t silenced as effectively as the AirPods Pro or the Sony WF-1000XM4 (review). Transparency Mode pleasantly surprised us with how natural and clear it sounded. 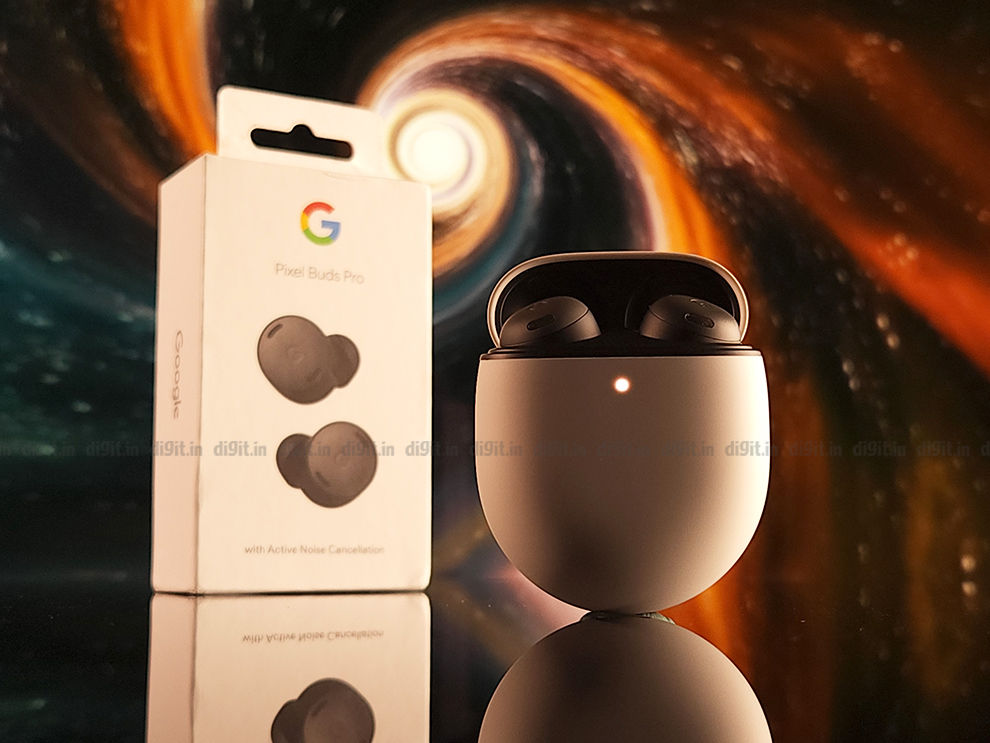 The best feature of the Pixel Buds Pro is deep Google Assistant integration. We will talk about the performance of this feature in the next section.

We previously reviewed the Google Pixel A-Series which boasted handsfree Google Assistant, and the newly-launched Pixel Buds Pro also comes packing this nifty skill. All you need to do is say Hi Google or OK Google to activate Assistant on these buds and you can follow that by any command you please such as asking about the weather, calling a contact, playing music, reading notifications, and more. You can also press and hold the left earbud to trigger Assistant. Not just that, you can also use the buds to translate 40+ languages. This worked pretty flawlessly when we tried Translate Conversation Mode in languages such as French and Spanish.

Moving on to sound quality, the Google Pixel Buds Pro house 11mm dynamic drivers and supports the SBC and AAC audio codecs. It’s disappointing to see a lack of hi-res codecs such as aptX or LDAC since most competitors come with these. The Pixel Buds Pro come with a V-shaped sound signature with slightly boosted bass and highs, and slightly recessed mids. This is a very common sound signature that is found on numerous buds in the market.

The boosted bass sounds punchy and full-bodied and the highs have good enough clarity but the mids are slightly drowned in the mix. Vocals in tracks such as Popular Monster by Falling In Reverse aren’t as detailed and clear as heard on similarly-priced buds such as the Sony WF-1000XM4. In some tracks such as Dream About Me by The Depreciation Build, the kick drums sound a bit too boomy, which can take away from the song. However, these are tiny nitpicks and for most users, these details won’t matter too much.

However, if you are an audiophile or someone who enjoys a more neutral sound signature, we’d suggest alternatives such as the Sony WF-1000XM4, the Sennheiser Momentum True Wireless 3 (review) or even the cheaper Oppo Enco X2 (review). However, if you’re okay with a V-shaped sound signature, the Google Assistant integration is fantastic for everyday use and the wireless connectivity is also stellar with Bluetooth 5.0.

Now, let’s talk about the buds’ microphone performance. The Pixel Buds Pro features three microphones in each bud paired with voice accelerometers and wind-blocking mesh covers. The caller’s voice sounds clear in most cases, especially if you’re using these indoors, in an office, for Zoom meetings. However, it doesn’t do too well with wind rejection and there were times when excessive wind would get picked up, sometimes more so than the caller’s voice.

The Google Pixel Buds Pro’s battery life is fantastic, right up there with the competition. The buds alone are rated at 11 hours of playtime and you get 31 hours of total playtime with the charging case, with ANC turned off. Turn ANC on, and you get 7 hours on the buds alone and 20 hours in total with the charging case. These numbers pretty much match up with all competitors such as the AirPods Pro, Sony WF-1000XM4, and Sennheiser Momentum True Wireless 3. 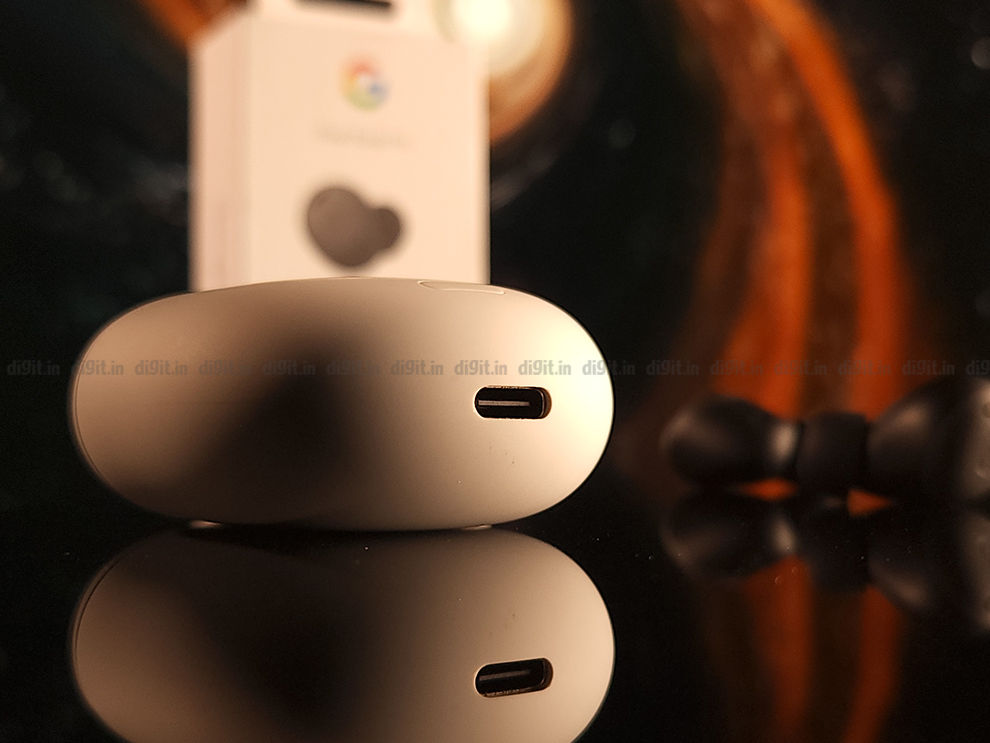 We tested the buds’ battery life for ourselves and recorded 6 hours and 35 minutes of playtime on the buds alone with ANC turned on and the volume set to 70 per cent. The case adds two extra charges. Not just that, the earphones also have fast charging support where a mere 5-minute charge will provide an hour’s worth of playtime. Also, the case can be charged on any Qi wireless charger, which is pretty convenient.

Google’s first attempt at Pro TWS earbuds is a successful one, in our opinion. Priced at ₹19,990, the Pixel Buds Pro has fantastic handsfree Google Assistant integration, great battery life, and decent Active Noise Cancellation. The sound quality is quite pleasant as well with detailed lows and highs. It sounds good with just about any modern genre of music such as pop, rap, hip hop or Bollywood.

However, if you’re looking for the best ANC or sound, this may not be your best bet. The AirPods Pro and Sony WF-1000XM4 are on a whole different level when it comes to ANC effectiveness and the Sennheiser Momentum True Wireless 3 has fantastic sound quality with support for high-quality audio codecs. Also, the fit of these earphones is not as secure as we’d like, so we wouldn’t suggest them to those who want to use their TWS when working out. So, if you’re okay with these compromises and want something that works well with your Android device with deep Google Assistant integration, the Pixel Buds Pro could be a good option for you.