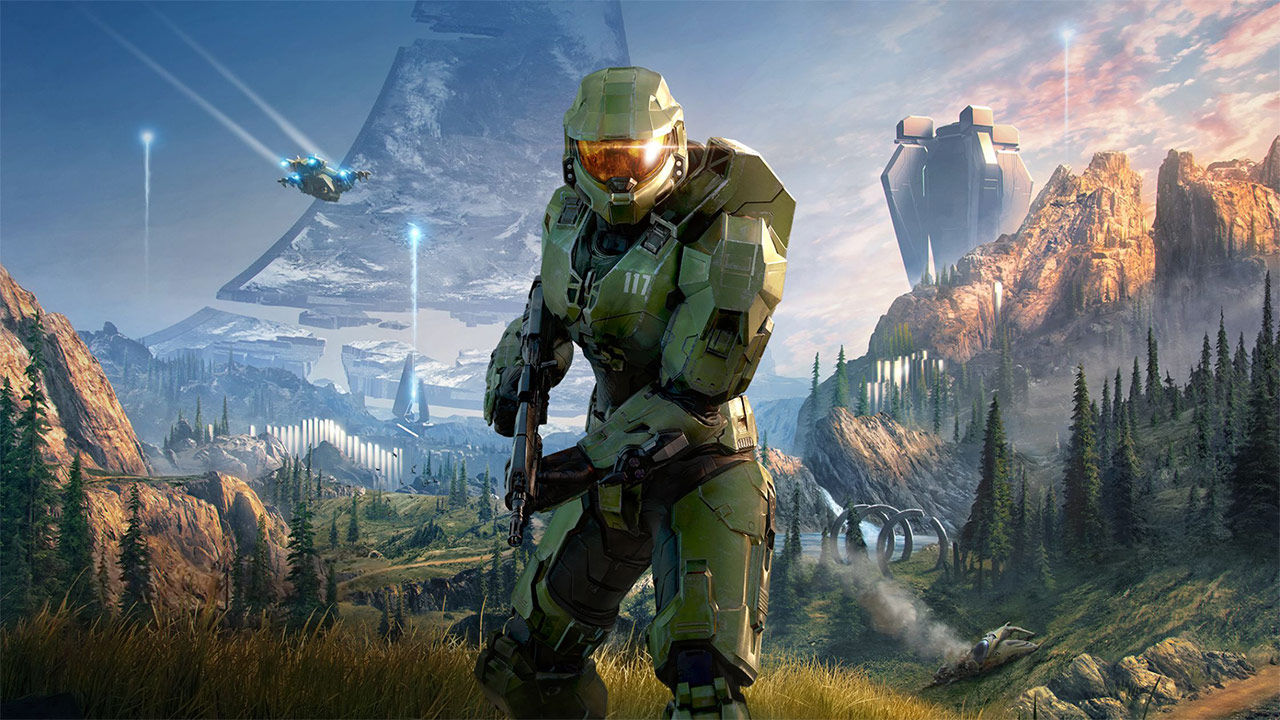 Before we get into this review for Halo Infinite, I should let you know that I haven’t exactly been following the Halo franchise. The only Halo game I’d played prior to Halo Infinite was the very first Halo Combat Evolved, which was a damn good game. Understandably, I’m skipping a considerable amount of lore and backstory here by jumping straight to Halo Infinite without playing Halo 2 through Halo 5. Although, Halo 5 was apparently a dumpster fire anyway, so I guess I dodged a bullet there. With that being said, I actually had a really good time playing Halo Infinite, and while I definitely felt a bit of a disconnect at times from the game’s main story, it was an enjoyable ride. Let’s dive into the review!

We’ll get to the story in a bit, but I cannot stress enough how incredibly fun Halo Infinite’s gameplay loop is. It’s not just a single thing that stands out, but rather how everything works together. This is the first Halo game to embrace the open-world format, and the execution in Halo Infinite is excellent. 343 Industries has done an excellent job of taking the linear(ish) environments that Halo was originally known for and blowing it up to a grander scale. They’ve managed to do this without making things feel cumbersome or monotonous. There’s a healthy sprinkling of things to do on the world map as you make your way towards the next story objective. These include recapturing Forward Operating Bases(FOBs), rescuing marine squads, infiltrating Banished fortresses and priority targets, which are like boss challenges. I should mention that the game’s not “truly” open-world, in the sense that parts of the world won’t open up till you complete the relevant story mission.

Before you even set foot on the open-world however, you will spend the early hours of the game learning the ropes, or firing it out of your wrist rather. We’re talking of course, about the Grappleshot. Like everything else in Halo Infinite we’ve mentioned so far, a grappling hook is nothing new. You should already be familiar with it if you’ve played games like Just Cause and Titanfall. But again, like everything else, it just feels right in Halo Infinite. You can use the grappleshot to grab weapons or fusion coils from a distance, get out of a pinch batman style when your shields are depleted, or literally launch yourself at enemies and whack them in the face with a stronger-than-usual melee attack. The grappleshot is the first of the equipment you will unlock in Halo Infinite, and the one you will probably use the most. It makes traversing around the ring a joy, as you grappleshot just about everything and spider-man your way across the map. You can also grappleshot vehicles to automatically drive them, or in-case an enemy is already on the vehicle, hijack it. 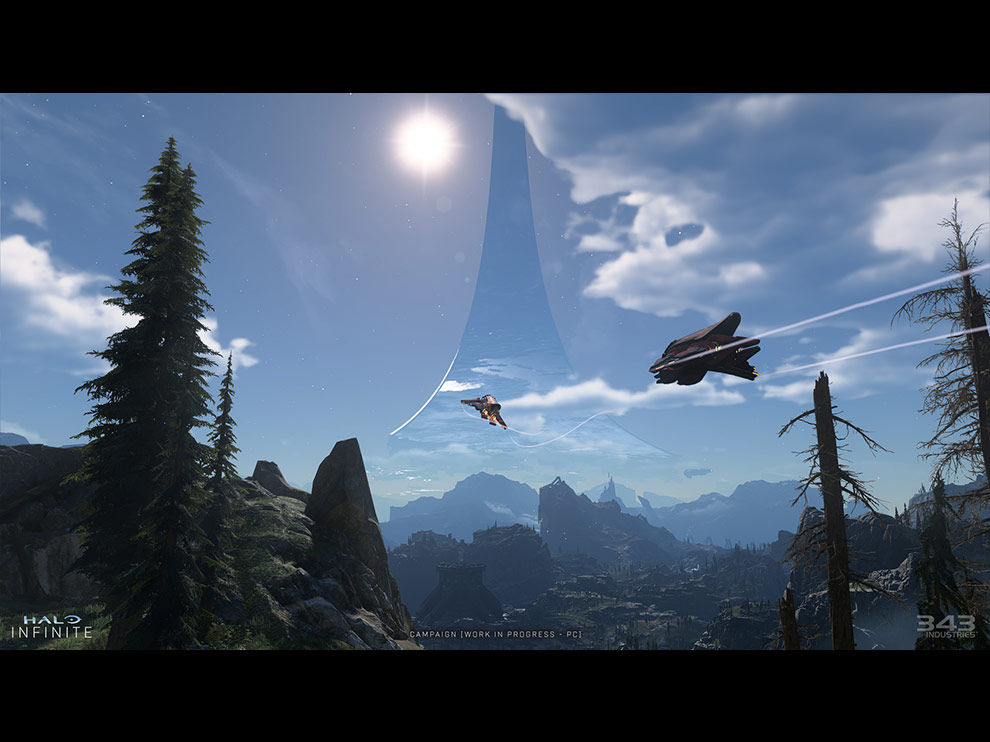 The targets or boss fights we mentioned earlier make for some of the best content Halo Infinite has to offer, managing to walk that fine line between being both challenging and fun. As a plus, beating them will also unlock new unique weapons in your arsenal. There’s plenty of variety in the bosses themselves, and in the ways you can approach them. 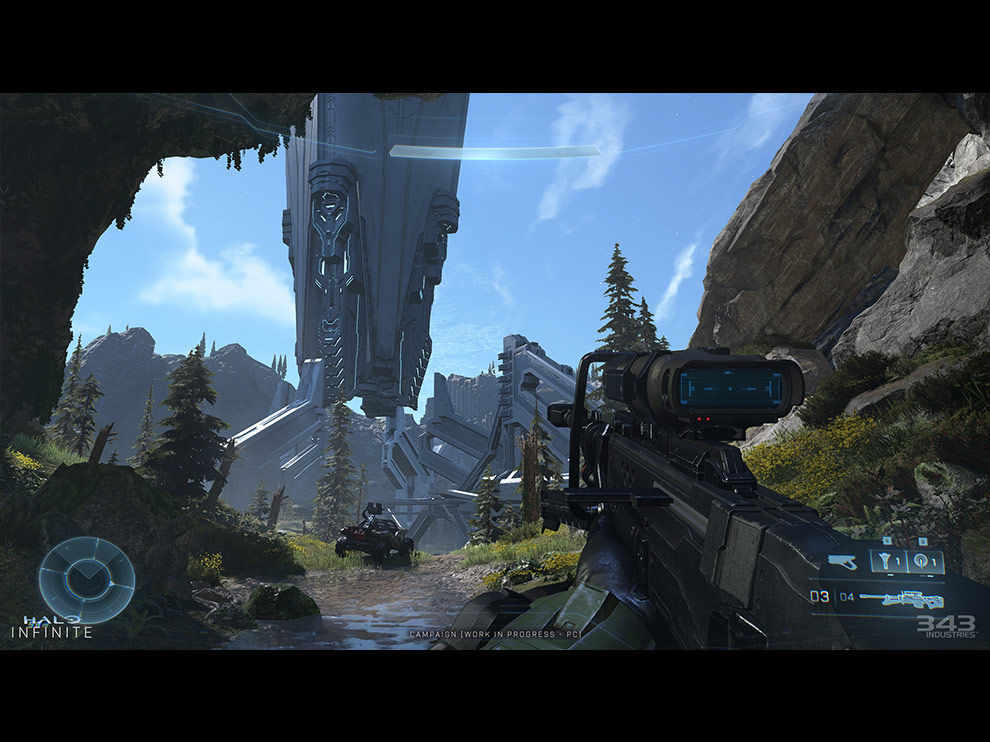 As you recapture FOBs the map shows more points of interest for you to explore, and on your way to them you can come across other interesting stuff, like propaganda radio towers, captured UNSC marines, and even collectibles that unlock cosmetics for the multiplayer mode. Speaking of FOBs, you can quick-travel to them, and replenish your ammo and access your arsenal of unlocked weapons at them. You can also call vehicles in here, and there’s a long list to choose from. Just keep in mind, TANKS BEAT EVERYTHING!! Jokes aside, vehicles are pretty stronk in Halo Infinite, I personally preferred traveling on foot and grappleshotting my way around, but some vehicles are worth it just for the firepower, which you will need for some missions and areas. You won’t have access to everything right off the bat though, doing activities on the map will earn you valor points, which unlocks more weapons and vehicles for you to use at FOBs. 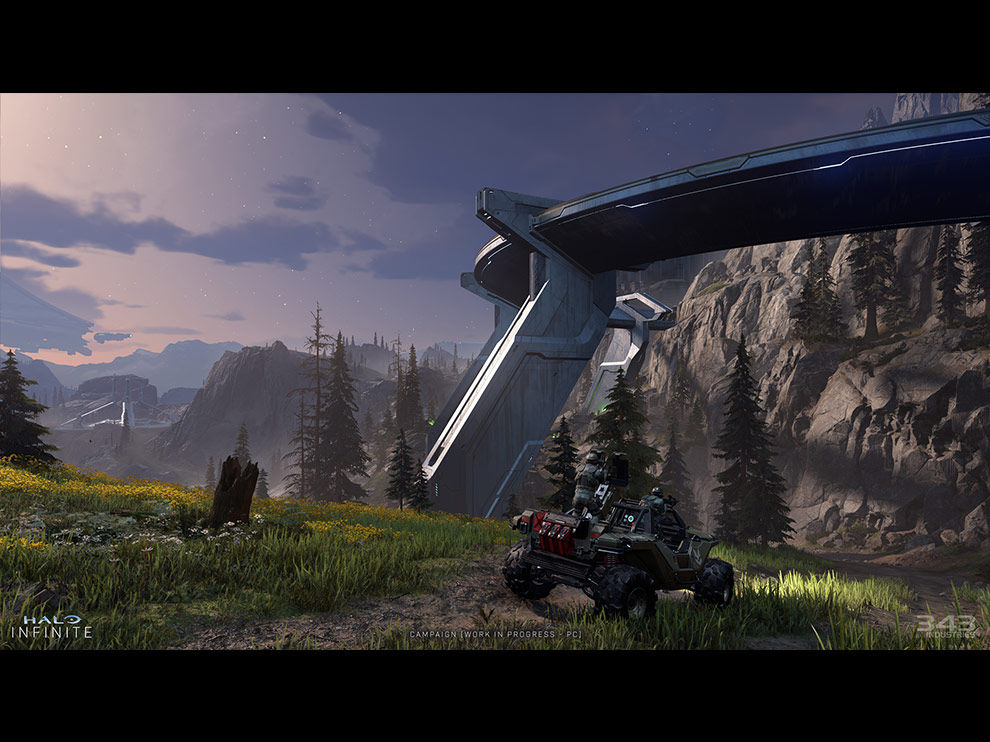 All of the above is a tried and tested open-world formula that we’ve seen in just about every Ubisoft game in the last decade, but again, Halo Infinite pulls it off fantastically, by not crowding you with stuff to do, or being too monotonous. There’s a good and solid flow to the action.

Like I mentioned in the intro, I haven’t followed the story of the Halo franchise, and from what I’ve heard and seen online, it was all good up to Halo 4. Then Halo 5 came along and it was a crime to gamerkind. You didn’t even play as Master Chief for most of the game! Imagine that. Halo Infinite makes an effort to bring things back on track, by trying to tie-up loose ends from Halo 5, and attempting to get a new story going, especially for newcomers to the franchise. 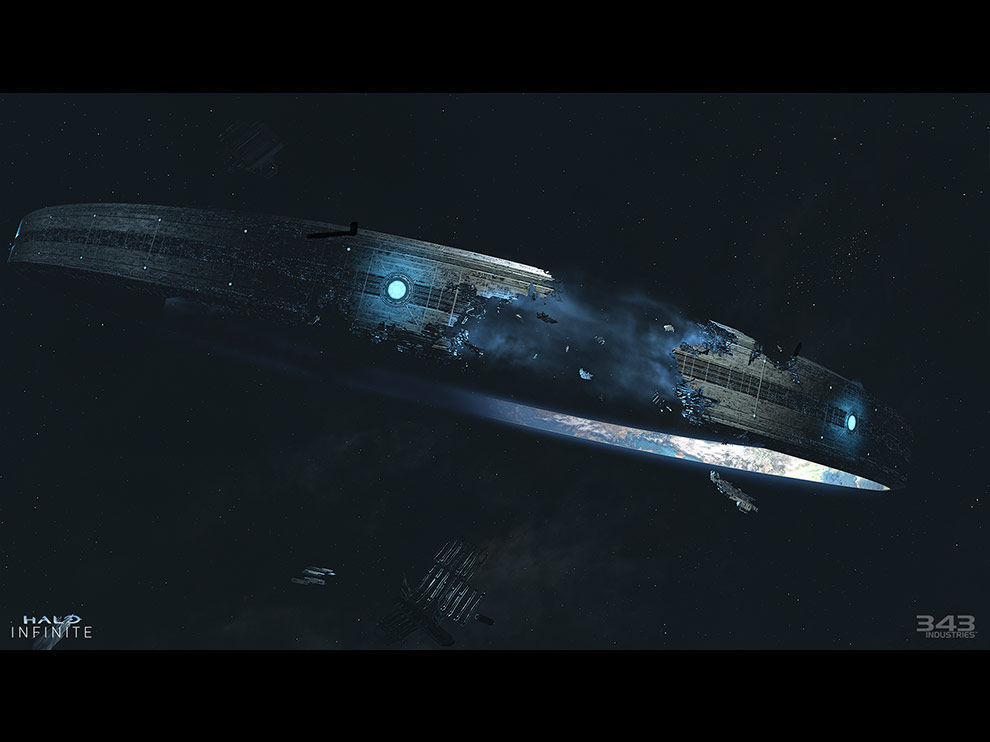 That’s a hard task, and it shows. However, Halo Infinite still manages to be compelling enough to keep you going all the way. This in large part has to do with the dynamic between Master Chief and his new AI, Weapon. Throughout the story you see the relationship between the Chief and Weapon grow, and the banter between them is excellent. 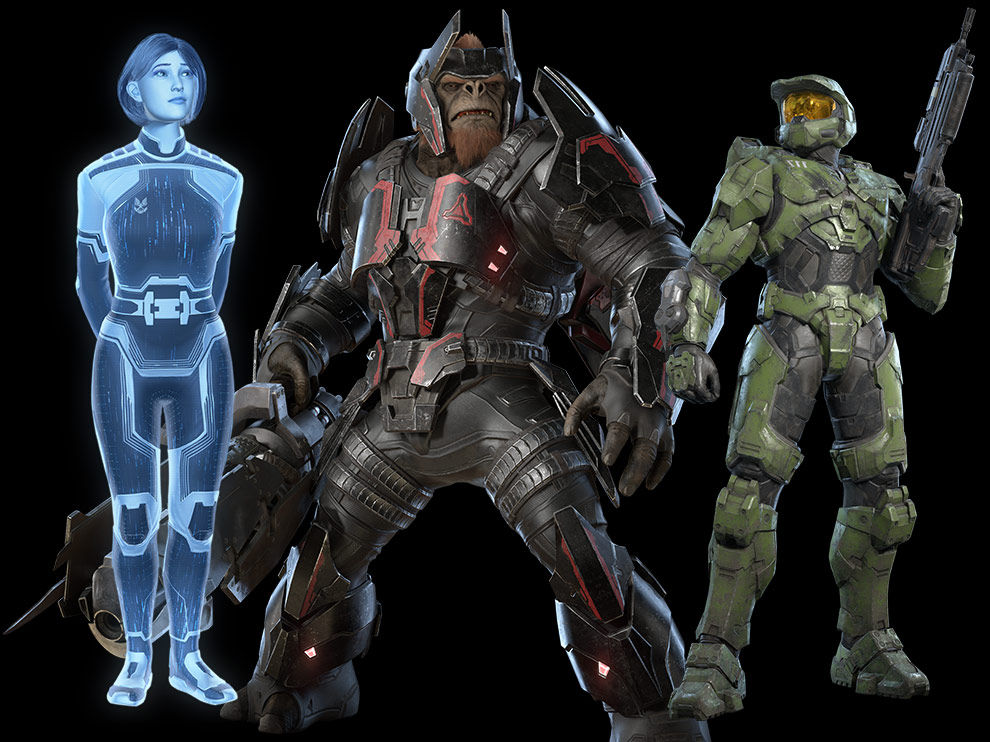 The story revolves around The Banished, a faction that split off from the Covenant and first made an appearance in Halo Wars 2. This is where a bit of a problem arises, you may be familiar with them if you have been following the franchise for a long time, however if you’re new(like me) you have no clue how we got here. Who are the Covenant? What happened to Cortana? Why did she go rogue? And other such spoilery questions. The game does little to answer these questions; you either need to do some reading yourself or watch a few YouTube videos to catch up. A story-so-far cinematic would have been nice 343. 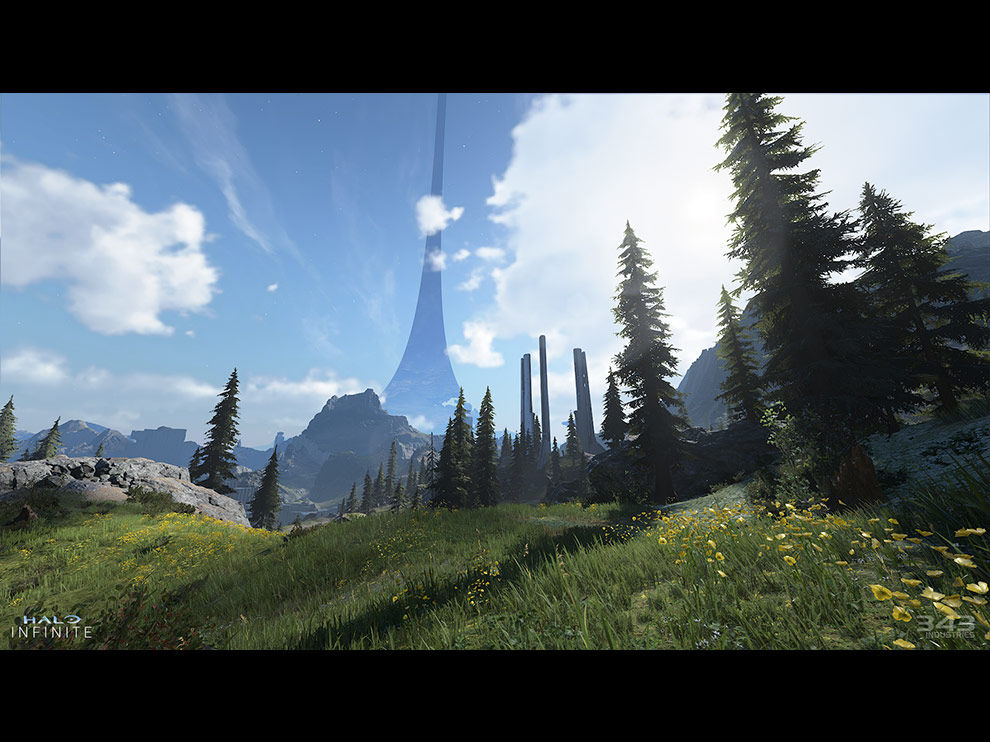 You should listen to the Halo theme while reading this review. That’s a banger. Just like the rest of the accompanying music. Both Steve Downes, who reprises his role as the Master Chief, and Jen Taylor, who voices Weapon (she also voiced Cortana btw) have done an excellent job. It’s hard to imagine anyone else voicing these characters.

Coming to the graphics, the game looks really good. Makes sense considering it was meant to be a showcase for the Xbox Series X. That being said, some more environmental variety in Zeta Halo (the Ring) would have been nice. What’s present is fantastic though.

Halo Infinite is some of the most fun I’ve had in an open-world game in a long time. This is an excellent shooter, with plenty of challenges and the freedom to approach things the way you want to with a wide variety of options at your disposal. The only thing lacking in Halo Infinite is the main story, which despite great characters and casting falls a bit short. It’s certainly still a massive step-up from the mess that was Halo 5. If things keep going this way though, the future of Halo looks bright.