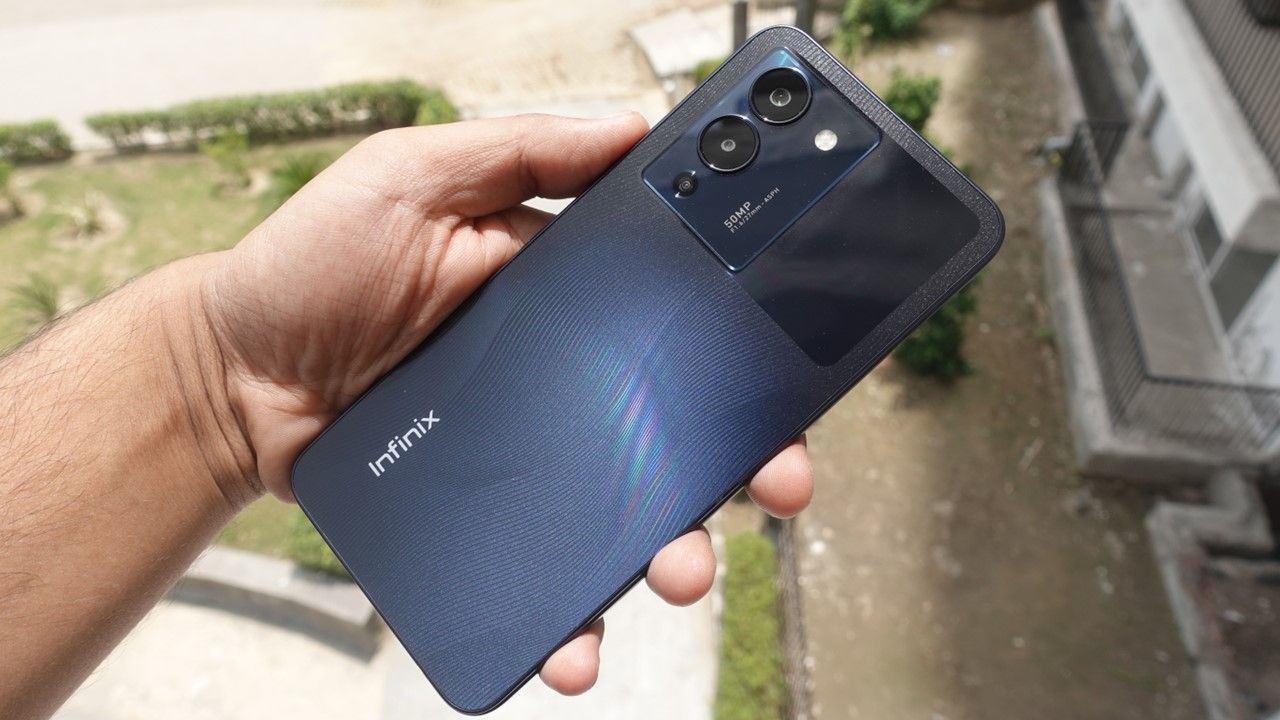 The Infinix Note 12 Turbo is a budget phone priced right at the sweet spot of under Rs 15,000 and goes up against the likes of the Redmi Note 11, Realme 9i and more. Infinix has also partnered with Marvel Studios’ Doctor Strange and the Multiverse of Madness for the Note 12 series but sadly this partnership is only limited to packaging changes, some stickers and a TPU case with a shoddily printed Tao mandala. On paper, Note 12 Turbo has a new design and an upgraded processor inside but most of the other features like the display and cameras are the same as the Note 11. In this review, we will find out whether or not the Infinix Note 12 Turbo is a good option at its asking price of ₹14,999.

The Infinix Note 12 Turbo has the newer Helio G96 chipset over the G88 on Note 11 and it largely brings in performance improvements. When it comes to day to day performance, the Note 12 Turbo can run most apps with ease and I did not come across any issues with running basic apps like Whatsapp and Snapseed or games like COD Mobile and Asphalt 9. However, much of the performance chops are brought down by badly optimized and bloatware filled software in XOS 10.6 which is based on Android 12 and has a 60Hz refresh rate display.

When it comes to synthetic benchmarks, the Note 12 Turbo scored better on AnTuTu than the Redmi Note 11S which also has the same Helio G96 chipset, but the Micromax In Note 2 with Helio G96 got a marginally better score in comparison. 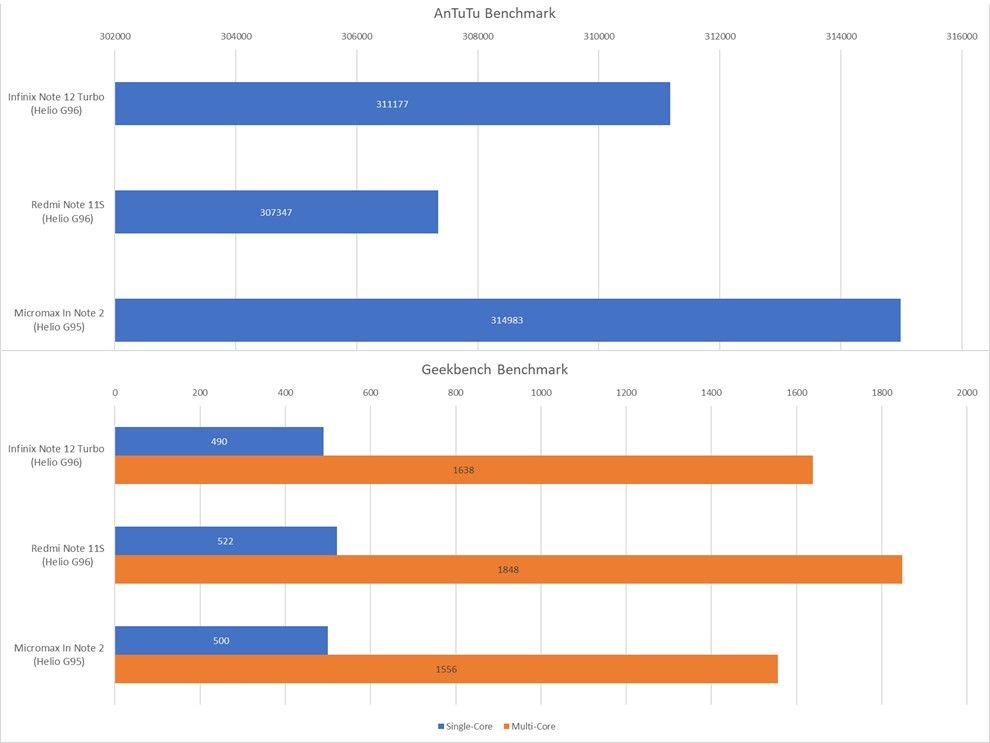 However, the Redmi Note 11S performed much better in Geekbench single-core and multi-core tests. The Note 12 Turbo aced the PCMark workload test which grades the phone in tasks like web browsing, photo editing and more. 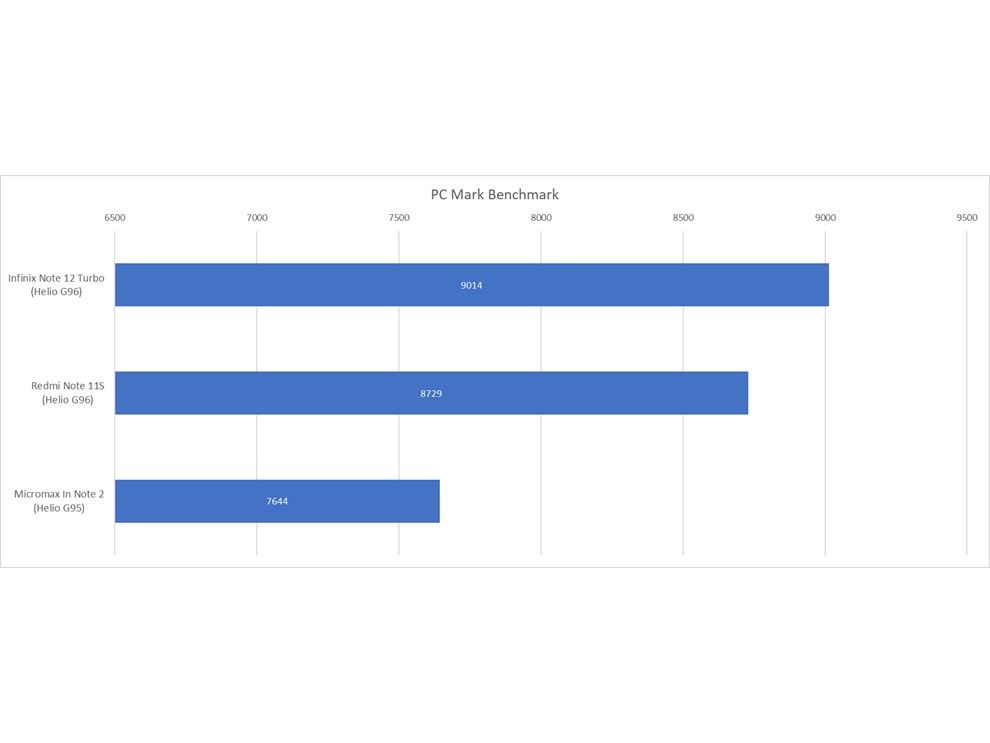 In the CPU Throttling test, the Note 12 Turbo throttled to 75% of its maximum performance which is a decent score and proves that it is capable of offering an overall balanced performance. 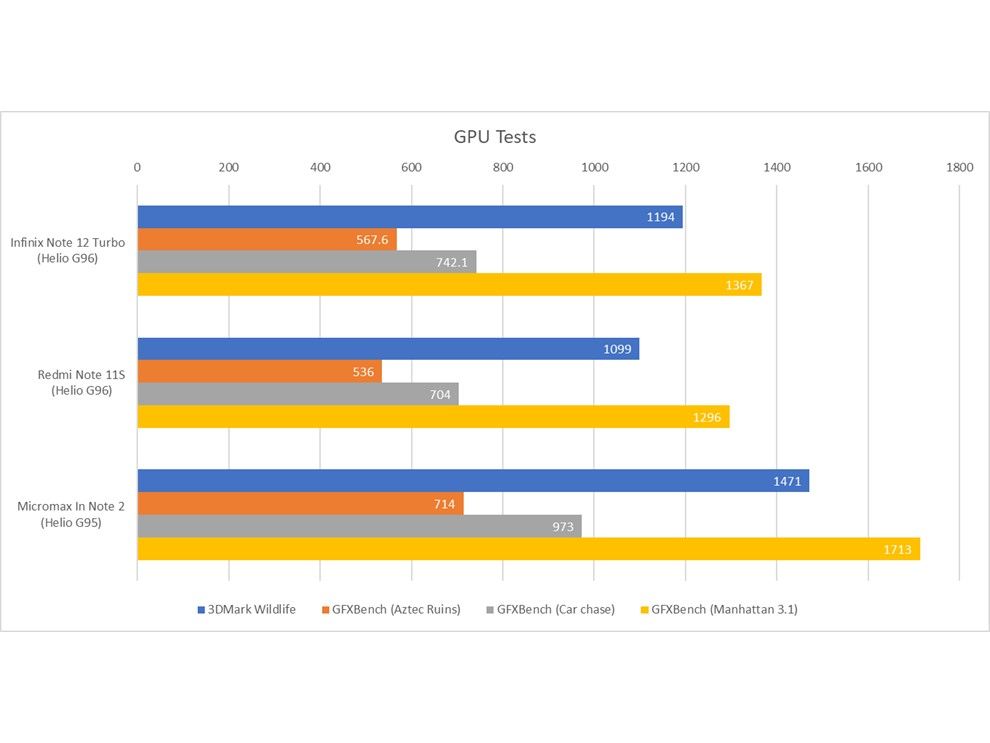 In GPU tests like 3DMark and GFXBench, the Note 12 Turbo’s performance is at par if not better than the Redmi Note 11S. We played games like Call of Duty Mobile and Asphalt 9 on the Note 12 Turbo where Gamebench recorded 58FPS on average at 100% stability in COD and 30FPS in Asphalt 9. COD was running at medium graphics and high frame rate and we didn’t notice any stutters or frame drops in our gaming experience.

The power button on the Note 12 Turbo doubles up as a fingerprint reader which is pretty quick and takes just a moment to unlock. The phone also has stereo speakers which are only decent for watching videos.

Overall, the Infinix Note 12 Turbo offers a solid performance but the highly customized XOS is cluttered and spoils the general experience. There’s a learning curve to this software which I find unnecessary and instead, Infinix should focus on delivering a great UI experience which is where MIUI or even stock Android takes the cake in fluidity and just the general day-to-day experience.

On casual use, the 5,000mAh battery in the Note 12 Turbo can last you for a full day and then some. The battery life will only decrease if you are a heavy phone user who is constantly checking social media, making calls, and using WhatsApp and cameras.

The Note 12 Turbo supports 33W fast charging and on average it took 1 hour 58 minutes to fully charge it from 0-100% which is pretty decent given the large battery. 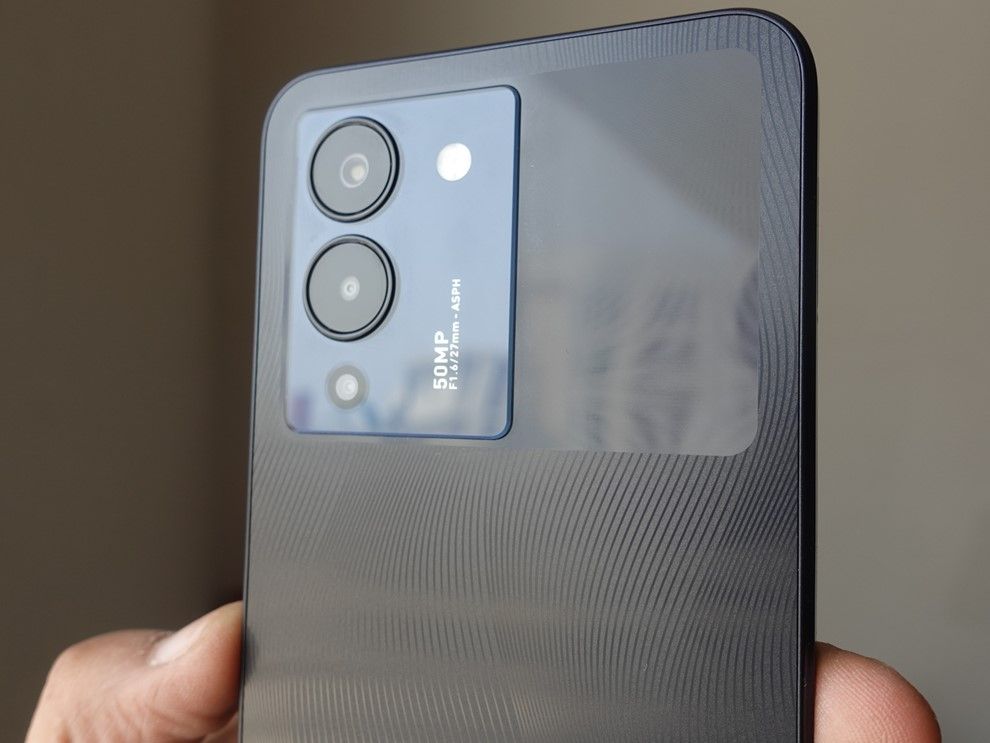 The cameras on the Note 12 Turbo remain largely unchanged from the Note 11. There’s a main 50MP camera with f/1.6 aperture which captures more light and details alongside a 2MP depth sensor and an AI lens.

In daylight, the main camera is capable of producing eye-pleasing and detailed pictures. The colours look balanced and the camera is able to bring out the textures perfectly. There is a 50MP mode which lets you capture a high-resolution picture which has even more details than normal.

The portrait mode lends an artificial bokeh to the background which looks equally good as the natural depth of field effect. At night, the Note 12 Turbo manages decent pictures and the night mode improves it by bringing in more details and controlling the highlights. However, this lends a processed feel to the result. This is an area where the software really comes into play and Infinix needs to put in more effort here.

Apart from this, the camera app is loaded with features like filters, Pro mode, Super Night mode, short video mode and more. The rear camera can also record in upto 2K (1440p) at 30FPS which is pretty good at this price range. The camera on the Note 12 Turbo works nicely and while the ultra-wide camera isn’t present, there are ample modes for users to try out. 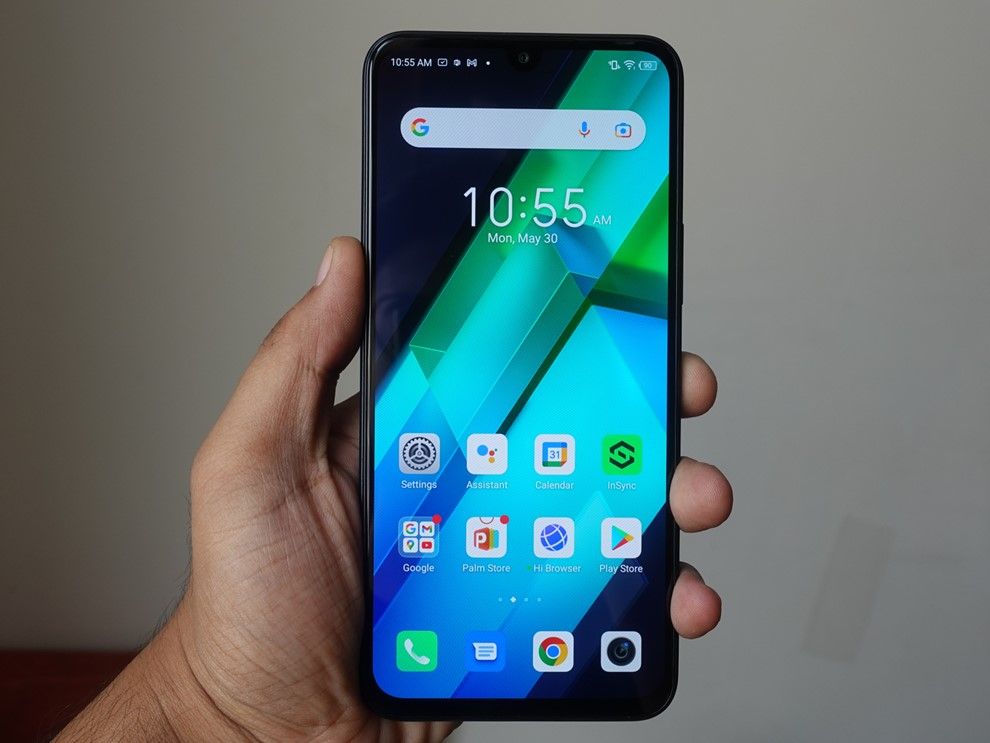 The Infinix Note 12 Turbo gets a large AMOLED display with a waterdrop notch cutout for the selfie camera. The display gets really bright and is great for daily use. While Infinix claims that the screen can go upto 1000 nits peak brightness, in our tests we measured 884 nits of peak brightness. The display has a slight blue tint which lends a cooler colour tone to all the elements and visuals and you can’t change colour profiles which is a bummer. It would also have been great if the display supported a faster 90Hz refresh rate but it’s a missed opportunity for Infinix that otherwise could have solidified its foothold. 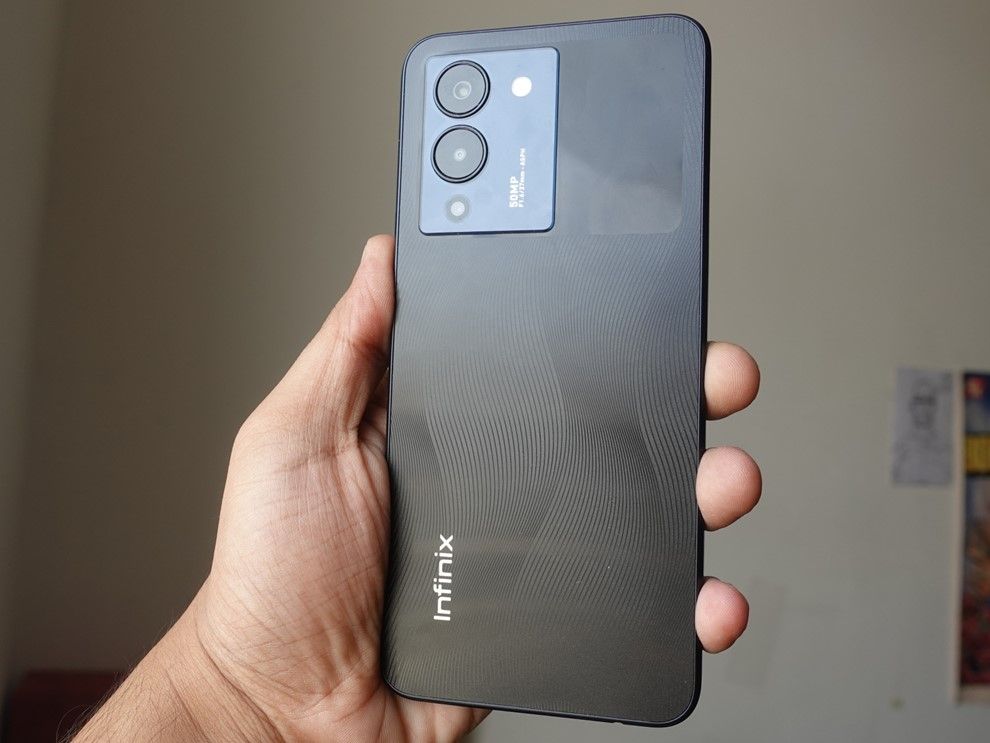 The Note 12 Turbo has a slim and lightweight profile measuring 8mm and 185 grams. It’s a budget phone so the build is mostly plastic but it feels good in the hand, especially the Force Black colour which has a textured design on the back. Though there’s a glossy part just beside the camera module that’s made to feel like an extension but is a fingerprint and smudge magnet that in my opinion spoils the looks. That aside, the Note 12 Turbo has flat edges which make for a comfortable feel and you also get a case in the box.

The Infinix Note 12 Turbo is a good phone for most users however, given its asking price of ₹14,999, there are certain issues that bring down the overall experience. For starters, I would have loved to see a higher refresh rate display which has become very common with likely a punch hole notch instead of the dated waterdrop notch and that would have boosted the visual experience my miles. Then, there’s a case of the XOS which comes pre-loaded with a lot of bloatware and unnecessary customizations that try to make it unique but end up breaking the experience.

Otherwise, the performance of the Note 12 Turbo is great, the camera takes good looking pictures and the battery life on offer is enough for most users. And while all of these features make it a great option for those looking for a phone under ₹15,000, it doesn’t have anything extraordinary to disrupt this segment that’s largely dominated by Xiaomi, Realme and other brands.