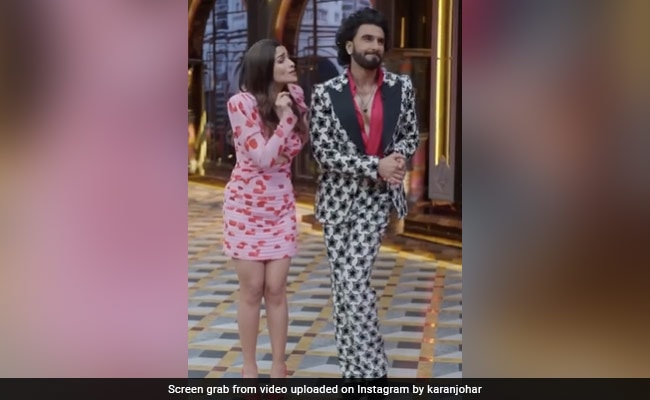 Ranveer Singh, who turned 37 today, got a whole lot wishes on social media on his special day. The one that stood out, has to be from Kabhi Khushi Kabhie Gham director Karan Johar. The filmmaker shared a fun video from the sets of his talk show Koffee With Karan 7, which airs tomorrow. In the video, Alia Bhatt and Ranveer Singh can be seen recreating the Kabhi Khushi Kabhie Gham scene featuring Kajol’s character Anjali and Farida Jalal’s Sayeeda, who are seen mimicking their neighbors in London. Alia is seen lip-synching Kajol’s dialogue “Oh hello Mrs Sprightley.” Ranveer is hilariously seen lip-synching Farida Jalal’s line “Oh hello Sugar.” After a conversation about some tea (with a drop of lemon in it) and some cookies to go with it, the two can’t help but get back to their Chandni Chowk roots and say: “Chhaddo” in unison. Enter Karan Johar. We think Alia Bhatt and Ranveer Singh did a fabulous job at the lip-sync.

Sharing the video, Karan Johar wrote in his caption: “It’s our Rocky’s rocking birthday and to make it even more special, we have his Rani by our side! Catch more of their laughter with me on the couch on the first episode of Hotstar specials Koffee With Karan S7, starting tomorrow on Disney+Hotstar.”

Check out the video here:

Just in case you forgot how iconic the original scene was, we are here refresh your memory. Take a look:

On Tuesday, Karan Johar shared the promo from the first episode of Koffee With Karan 7,featuring Alia Bhatt and Ranveer Singh as his first guests. The topics of discussion veered from the “myth that is suhag raat,” per Alia Bhatt, contenders for Alia’s “best onscreen chemistry,” Ranveer’s inputs – funniest of ’em all – “Genius of the year” and more.

Speaking of iconic Kabhi Khushi Kabhie Gham scenes, Alia Bhatt also famously recreated Poo’s prom selection scene, which was reviewed and loved by the original Poo herself (Kareena Kapoor). PS_ Ranveer Singh was a part of the video too. He played Hrithik Roshan.

Alia Bhatt and Ranveer Singh are co-stars of the 2019 film Gully Boy. The actors will also be seen in Rocky Aur Rani Ki Prem Kahani, which is being directed by Karan Johar.