Actor Jeremy Renner, who is hospitalised following a snow-ploughing accident, extended gratitude to the medical support staff. The actor celebrated his 52 birthday on Saturday in the hospital.

Taking to Instagram, in a story, he shared a picture with the hospital’s medical staff. He wrote, “Thank you renowned Medical ICU team for beginning this journey.” Earlier, he shared a picture of himself on social media and thanked his fans and well-wishers for the love. And several celebrities extended their warm regards and wished the actor to get well soon. 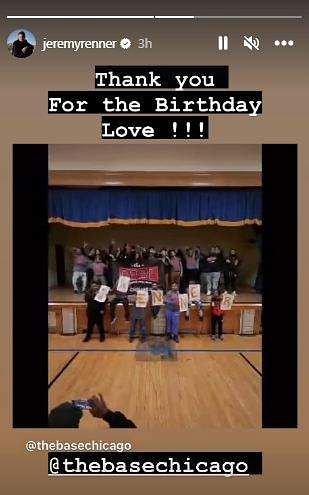 It may be noted that Renner suffered blunt chest trauma and orthopaedic injuries in a weather-related accident near Reno, Nevada, on New Year’s day. He underwent surgery on Monday at a nearby medical centre. He is popularly known for his work in The Mayor of Kingstown and Marvel’s Hawkeye series as well as the Avengers and Captain America films. He secured Oscar nominations for The Hurt Locker in 2010 and as a supporting actor for The Town in 2011. Meanwhile, the Mayor of Kingstown’s second season is set to premiere on January 15 on Paramount+.