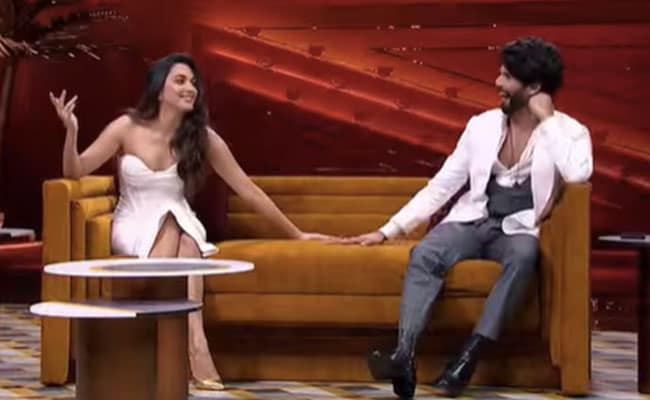 Karan Johar has dropped a promo for the upcoming episode of Koffee With Karan and this “jodi has everyone’s hearts” – Kabir Singh stars, Shahid Kapoor and Kiara Advani. The clip opens with KJo asking Shahid (in a rapid-fire round) about his “sexiest feature”, and his answer: “Not visible to camera right now”. Next, we see, KJo asking Kiara some questions. He says, “The first word that comes to your mind when I mention the names of your following co-stars, Shahid,” to this, she hilariously replies, “Preeti” (her Kabir Singh character). When Karan mentions Sidharth Malhotra’s name, Shahid hilariously calls out her name in a similar manner.

Later, Shahid called  Sidharth Malhotra and Kiara Advani a “good looking couple,” while Karan Johar added, “Gorgeous. Bachche kamaal ke hoge (They’ll have wonderful babies).” Towards the end of the promo, Shahid Kapoor hinted at a big announcement from Kiara Advani, “Be ready for a big announcement sometime around the end of the year… it’s not a movie”

“This jodi has everyone’s hearts ‘preeti’ melted with their on-screen presence, but on the koffee couch they were as candid as they get!” read the caption.

In the previous episode, Sidharth Malhotra was accompanied by Vicky Kaushal. The filmmaker tried his best to get Sidharth to admit his relationship with Kiara. KJo says, “So now you are seeing Kiara Advani, any future plans?” The actor replies, “I am manifesting it today…” However, Karan Johar intervenes and says, “that you are marring Kiara Advani?” On hearing this, the actor says, “a happy future and life.”

The upcoming episode of Koffee With Karan will stream on Disney+Hotstar on Thursday (August 25).