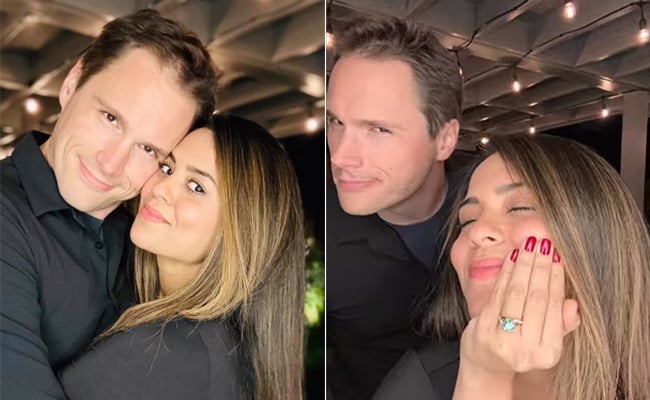 A still from the video. (courtesy: sanaofficial)

Sana Saeed aka Kuch Kuch Hota Hai‘s Anjali gets engaged to her boyfriend Csaba Wagner. The actress, on Sunday, shared a video on her Instagram handle offering a glimpse of her magical proposal. The news has come on the occasion of New Year 2023. In the video, the couple can be seen twinning in black outfits. Csaba can be seen going down on his knees, while Sana, on the other hand, seems to be in shock at being proposed. The video also features Sana showing off her engagement ring and some adorable pictures of the couple.

Sana Saeed and Csaba Wagner have been dating each other for a while now. The actress keeps her Insta family updated by sharing pictures with him. On her boyfriend’s birthday, Sana shared an adorable selfie and captioned it as “Happy Birthdayyyy to the Best Man in My World. I Loveeee You Berry Much.”

Check out more pictures of a newly engaged couple below:

Meanwhile, on the work front, Sana Saeed made her acting debut as a child artist in Shah Rukh  Khan, Kajol and Rani Mukerji’s Kuch Kuch Hota Hai. She played the role of SRK’s daughter Anjali. He has also starred in Badal and Har Dil Jo Pyaar Karega. In 2012, Sana made her acting debut as an adult in Student Of The Year, starring Varun Dhawan, Alia Bhatt and Sidharth Malhotra.

Kiara Advani And Sidharth Malhotra Fly Out For Holidays