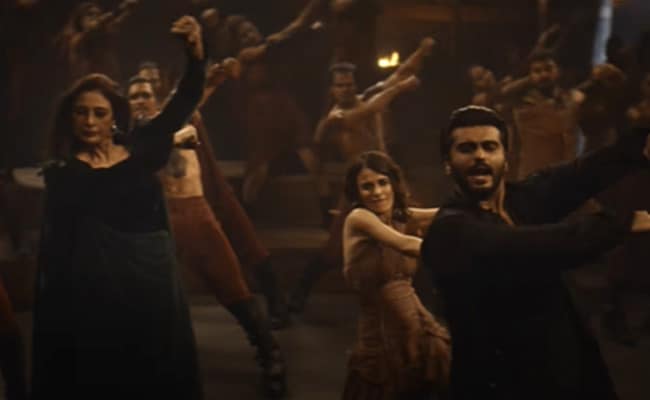 A still from the video. (courtesy: T-Series)

Makers of the upcoming action thriller ‘Kuttey’ unveiled the second song of the film ‘Phir Dhan Te Nan’ on Thursday.

Taking to Instagram, Arjun Kapoor shared a short glimpse of the song which he captioned, “Vibe Swag Music Set the dance floor on by grooving to the tunes of #PhirDhanTeNan, song out now! Song Link In Bio. #Kuttey In Cinemas 13th Jan.”

Composed by Vishal Bhardwaj and sung by Sukhwinder Singh and Vishal Dadlani, the song is a recreated version of the song ‘Dhan Te Nan’ from Shahid Kapoor’s film ‘Kaminey’.

Vishal Bhardwaj said, “‘Phir Dhan Te Nan’ is an emotion which wells up inside you. It’s catchy, yet stirs up the memories of the original song, Dhan Te Nan, which was a chartbuster that never lost its charm. It is played even today. Perhaps that’s why, initially it was challenging for us to compose Phir Dhan Te Nan think about making changes to the original tune. We needed to integrate both, keeping the originality of the former with the freshness of the latter intact. Another challenge was that Dhan Te Nan is so perfect. That’s why had to have multiple sittings, discussions and jamming sessions before finalising the new version.”

Soon after the ‘Gunday’ actor shared the song fans flooded the comment section with red hearts and fire emoticons.

“Dhan Te Nan was composed more than a dozen years ago, so we had to keep in mind that the changes in the new version had to reflect the contemporary beats and music of today yet have its soul intact. A major decision was retaining the original singers and lyricist again – Sukhwinder and Vishal Dadlani, singing Phir Dhan Te Nan with the legendary Gulzar saab writing the lyrics. We will always be extremely thankful to Gulzar saab for helping us with this one too. Vishal’s vibrant voice combined with Sukhwinder’s crooning spells magic for our song. It’s sensuous, rhythymic and pulsating. Now it’s all out and all yours to feel the magic too,” he further added.

Helmed by Aasmaan Bhardwaj, ‘Kuttey’ is all set to hit the theatres on January 13, 2023.