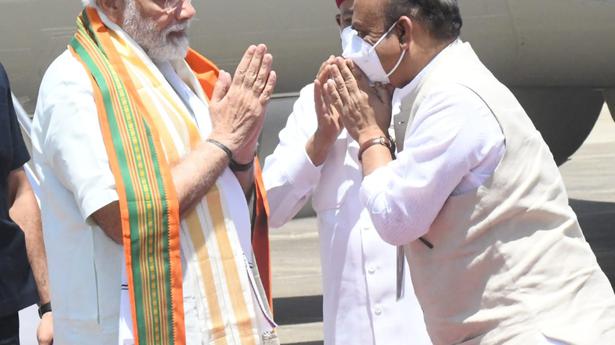 He arrived in Mangaluru from Kochi after dedicating to the nation INS Vikrant, India’s first home-built aircraft carrier

He arrived in Mangaluru from Kochi after dedicating to the nation INS Vikrant, India’s first home-built aircraft carrier

Prime Minister Narendra Modi arrived at Goldfinch City grounds at Bangra Kuluru in Mangaluru at 2.10 p.m. on September 2, 2022 to dedicate and lay foundation stone for eight projects worth Rs. 3,800 crore.

He arrived in Mangaluru from Kochi after dedicating to the nation INS Vikrant, India’s first home-built aircraft carrier.

A huge crowd, comprising beneficiaries of welfare schemes of the Union and State governments and workers of the BJP, gathered at the ground. People greeted the Prime Minister with huge applause and chants of “Modi Modi” as he arrived on the stage.

Earlier, before taking to the stage at 2.25 p.m., he was briefed by the officials about the projects of the New Mangaluru Port Authority (NMPA) and MRPL, and Kulur fisheries harbour which will be developed.

In his introductory address, Mr. Sonowal briefly spoke about how NMPA was growing steadfast implementing various initiatives of the Central government, including solar energy, complete digitisation and coastal cargo.

Karnataka CM Basavaraja Bommai called this a golden letter day for development in coastal Karnataka. “The PM wants development of all corners of the country for overall growth. Ports have to grow to boost exports and gain foreign exchange. Major development projects are being initiated at NMPA to enhance its capacity four times,” the CM said.

“People ask what came from double engine government,” Mr. Bommai said pointing out several port-fishermen related projects in Karnataka’s coast. “Under Sagarmala project, 18 projects were completed and 12 projects were sanctioned by the Shipping Ministry for Karnataka. The Centre has modified the Coastal Regulation Zone in Karnataka to facilitate tourism development. It also approved a port at Majali in Uttara Kannada district at a cost of ₹350 crore,” he added.

“Under PM Matsya Sampada Scheme, 100 mechanised fishing boats were sanctioned to increase fish production. Karnataka government is developing two ports and extending Mangaluru and Karwar ports. Fisheries College is also being developed. Fishermen would get 5,000 houses under Matsyashraya scheme at a cost of ₹64 crore,” the chief minister said.