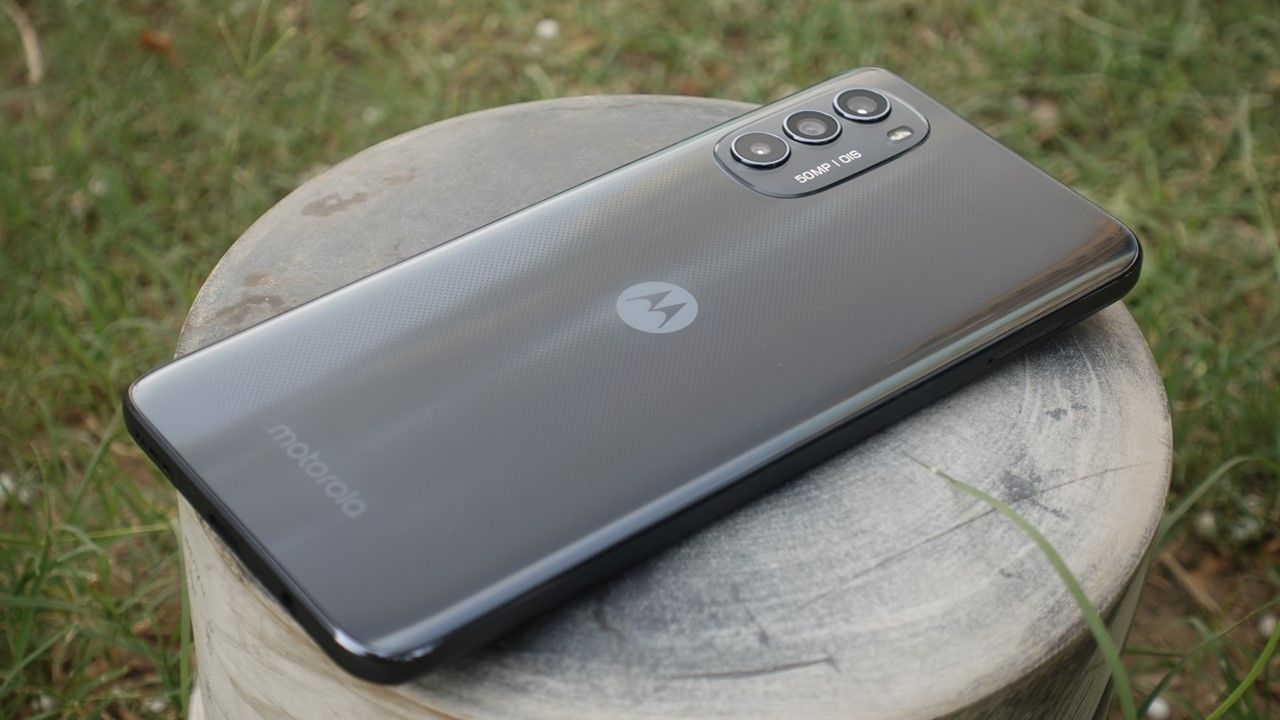 The Moto G82 is the latest mid-range phone from Motorola with features like a 50MP triple camera setup with OIS, stereo speakers, 10-bit AMOLED display with 120Hz refresh rate support, all packed in a thin and lightweight profile. The G82 builds upon the Moto G71 from earlier this year and addresses most of the drawbacks of that phone. However, Motorola continues to sell the G71 5G which could confuse the end-user who are looking for a great value for their hard-earned money. So, is the Moto G82 just another mid-range outing for Motorola or does it pack enough firepower to have an upper hand against incumbents like the Redmi Note 11 Pro+ (review) and OnePlus Nord CE 2 Lite (review)? Here’s what we found out.

Moto G82 review: In the box

The retail box of the Moto G82 has a pre-applied TPU case along with a 33W fast charger, a Type-C cable, some paperwork and a SIM ejector tool.

Most phones with Snapdragon 695 under the hood offer a balanced performance that’s just perfect for daily use. While Snapdragon 778G offers better performance chops, more brands have accepted the 695 for their mid-range offerings. Motorola was the first brand to launch a phone powered by the 695 in India with the Moto G71 and the G82 carrying the same power inside. 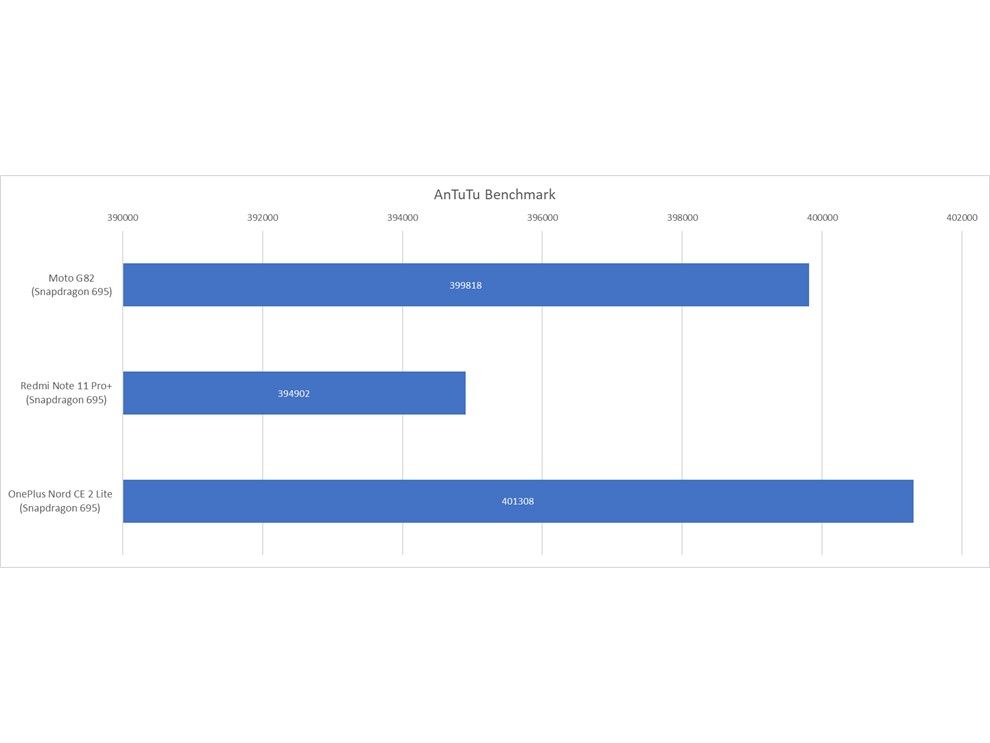 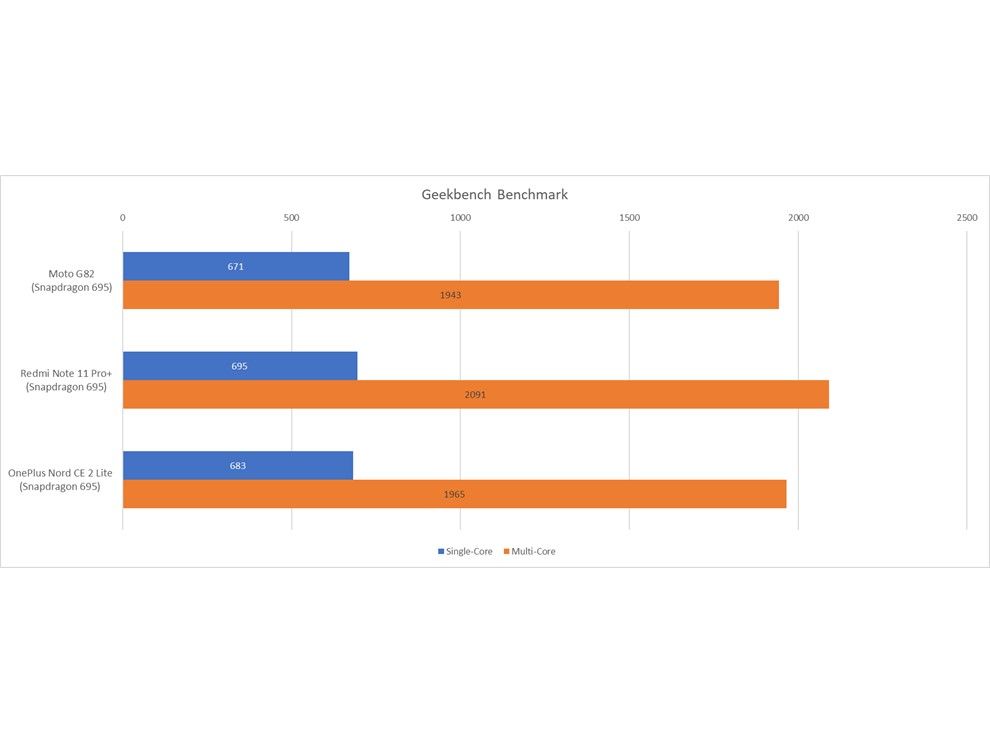 The Moto G82 performed as expected in our synthetic benchmarks with scores that are at par with other Snapdragon 695 phones. In AnTuTu, the G82 got a better score than the Redmi Note 11 Pro+ but the Nord CE 2 Lite jumped ahead by a margin. In Geekbench tests, however, the G82 got lower scores than the Redmi Note 11 Pro+ and the Nord CE 2 Lite in both single-core and multi-core tests. This means that while the G82 is functionally adept at running workloads that mimic real-world use and is as good as the other two competing phones. 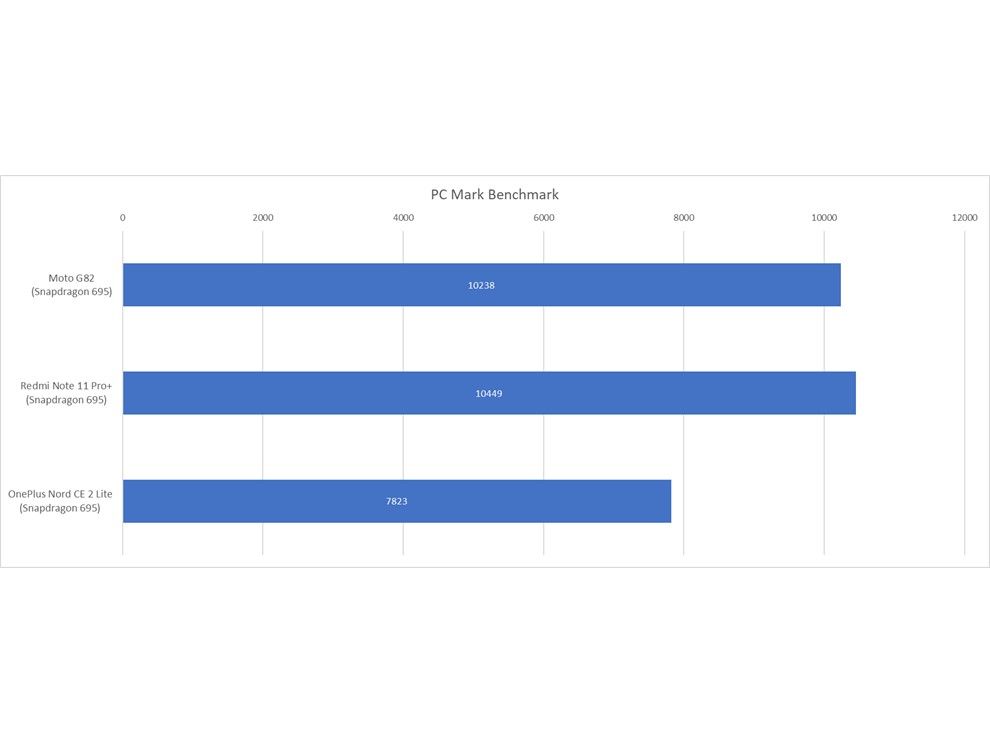 In the PCMark workload test, the G82 came in a close second after the Redmi Note 11 Pro+ while the Nord CE 2 Lite was left behind in the dust. PCMark runs multiple workloads that are based on real-life use cases like web browsing, photo editing and more and these scores are only a foretaste of the kind of daily performance you can get from the G82 which is not at all bad. 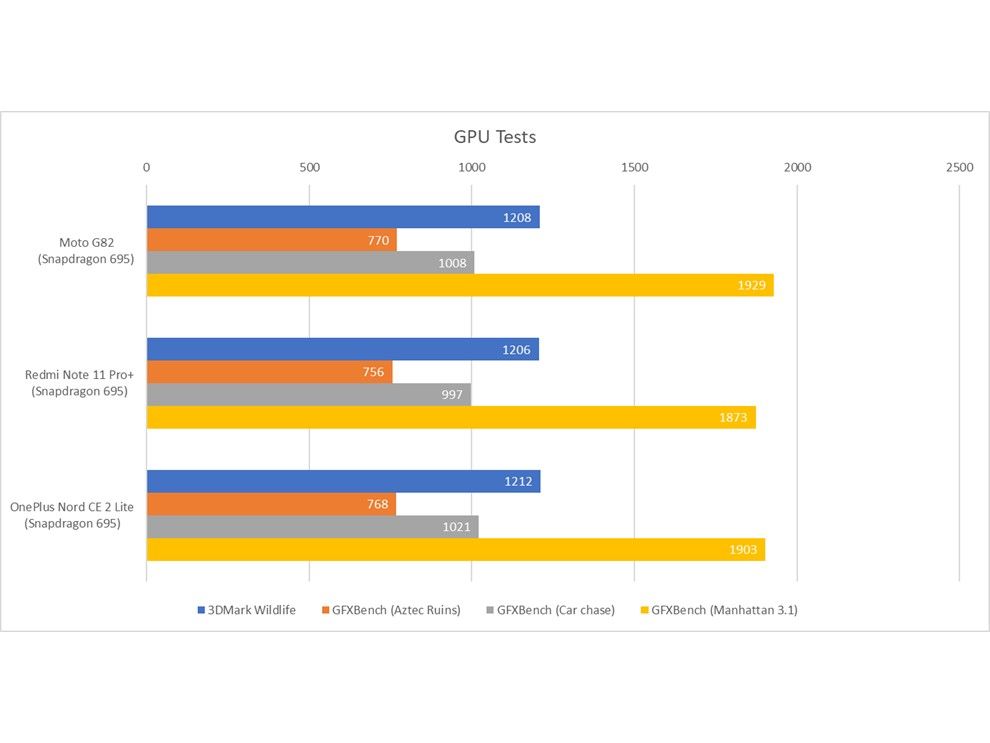 The Moto G82 also qualified GPU tests like 3DMark and GFXBench, performing equally good and sometimes better than its two counterparts. We also used Gamebench metrics to record the gaming performance of the G82 and it did not disappoint. 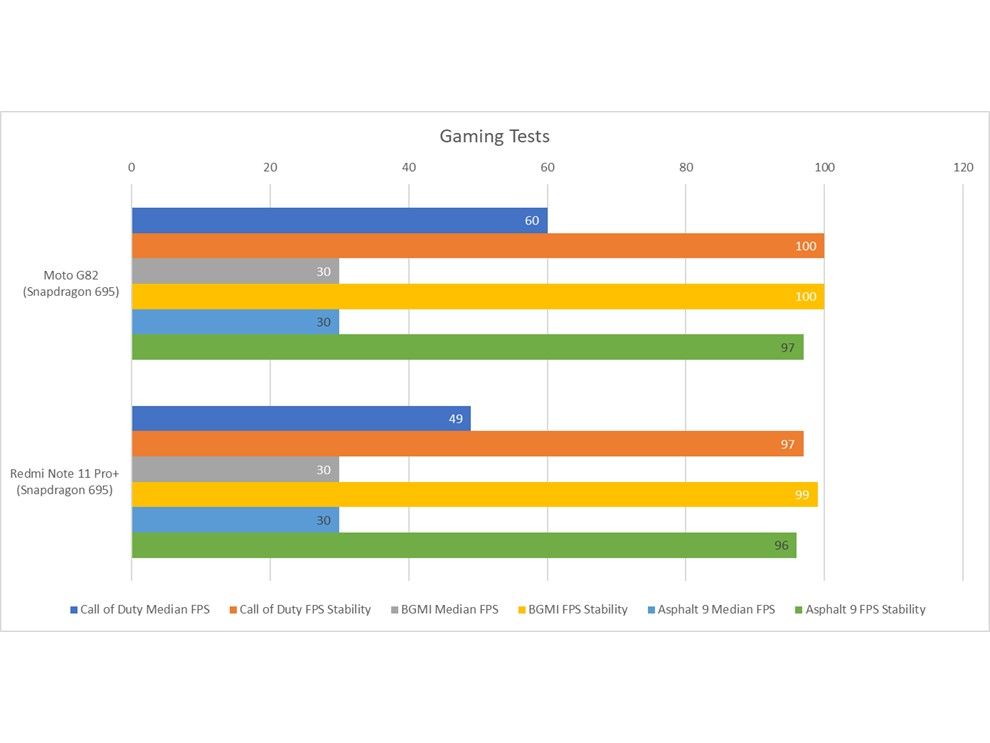 The G82 ran COD Mobile at 60FPS at 100% stability, BGMI at 30FPS and 100% stability and Asphalt 9 at 30FPS at 97% stability. This goes on to prove that the G82 is great for playing games and I did not encounter any major lags or frame drops while gaming on it. The display is very smooth and makes the overall experience better.

One of the best things about the Moto G82 is its battery life and how Motorola has optimized it to make it efficient. You’re looking at a full day’s worth of battery life if you’re a heavy user who’s on their phones for most of the time watching videos on YouTube or social media, playing games, calling, messaging, using cameras and more.  But casual users and those with little to no multimedia consumption can get over two days of battery life from the G82 which is much better than what most phones offer at this price. In our video loop test, the G82 lasted for over 16.5 hours which is a great score and reminds me of the battery performance of the Redmi Note 10 Pro Max. The phone supports 30W fast charging but Motorola is providing a 33W charging adapter in the box. It took around 1 hour and 46 minutes to fully charge the G82 from 0-100%. Of course, you will find a faster-charging standard with the Redmi Note 11 Pro+ which supports 67W and fills the battery in around 55 minutes. 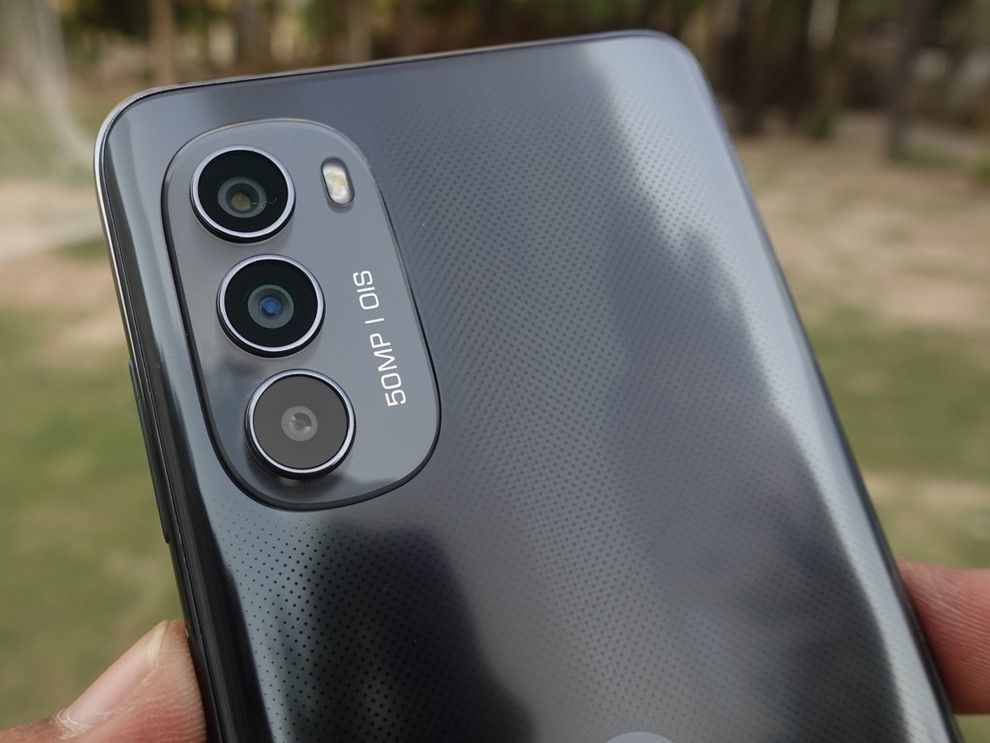 The Moto G82 has the same cameras as the Moto G71 except that you get OIS (optical image stabilization) on the main camera of the former. With OIS, you can expect to shoot videos with little to no shakes as the stabilization lends good support for hand-held use.

Other than that, the main camera of the G82 takes good and sharp pictures in daylight. The large aperture means that the sensor gets more light and details for the final output. The main camera also lends a shallow depth of field effect to pictures which is subtle and doesn’t look artificial.

The pictures from the main camera are ever so slightly brighter than those from the Redmi Note 11 Pro+, especially in the shadow areas. However, since the Note 11 Pro+ has a higher resolution sensor, it can capture even the minute details in the frame easily which is where the G82 struggles a bit.

In low light, the Moto G82 takes decent pictures but the loss in details is clearly visible when pixel-peeping. Switching to night mode improves the contrast, and shadows and eliminates most noise from the picture but at the cost of the brightness. Here, the Redmi Note 11 Pro+ performs much better as it can control highlights and shadows in a much more efficient way giving you a good nighttime picture.

There is a 2MP macro camera that’s good for extreme close up shots but keep in mind that because it’s a low-resolution sensor, you will need enough light on the subject for a decent picture. As for the selfie camera, works great and takes close to natural-looking pictures with a good amount of brightness and details. 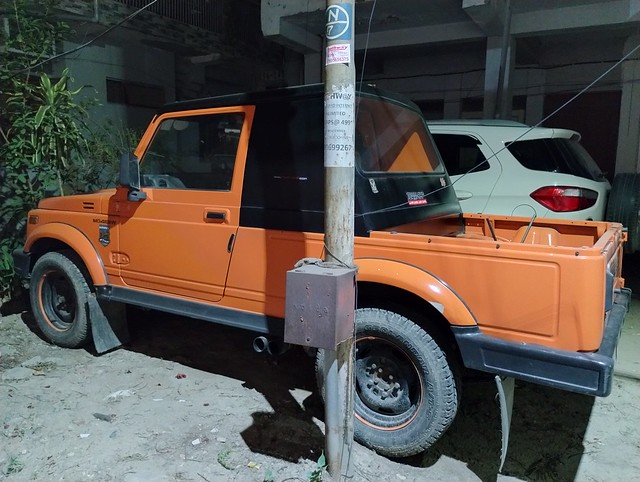 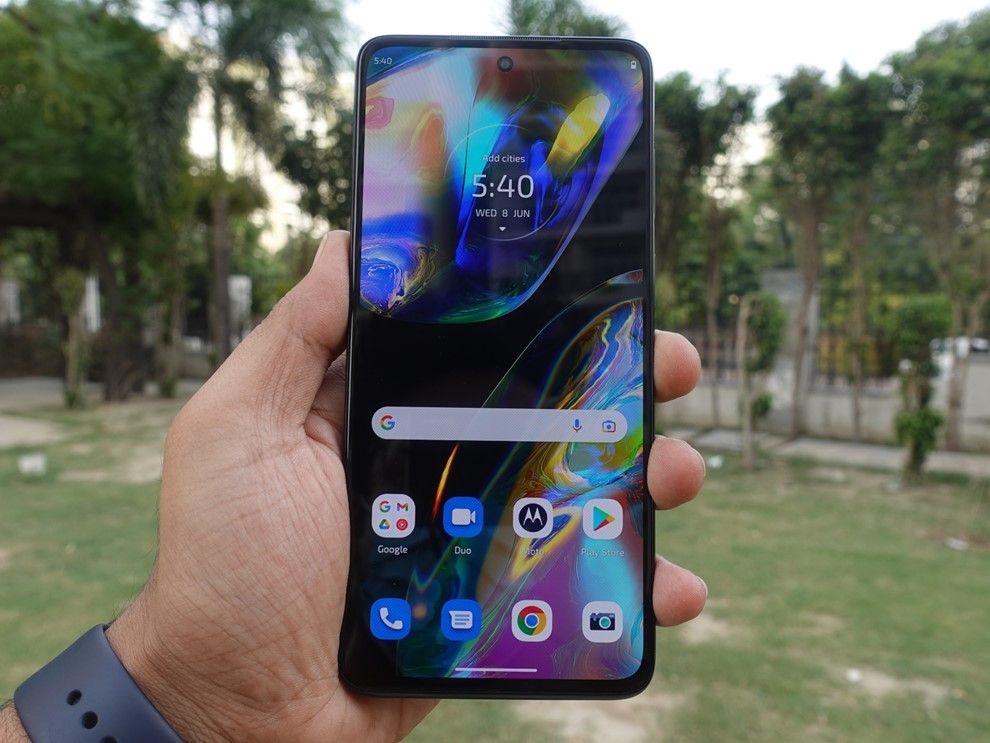 In my use, the display of the Moto G82 is one of its best highlights as the screen gets bright enough at even 70-80% brightness and produces a wide range of colours making it great for watching videos and movies. But just like the Redmi Note 11 Pro+, the display doesn’t support HDR playback on YouTube, Netflix and other apps. 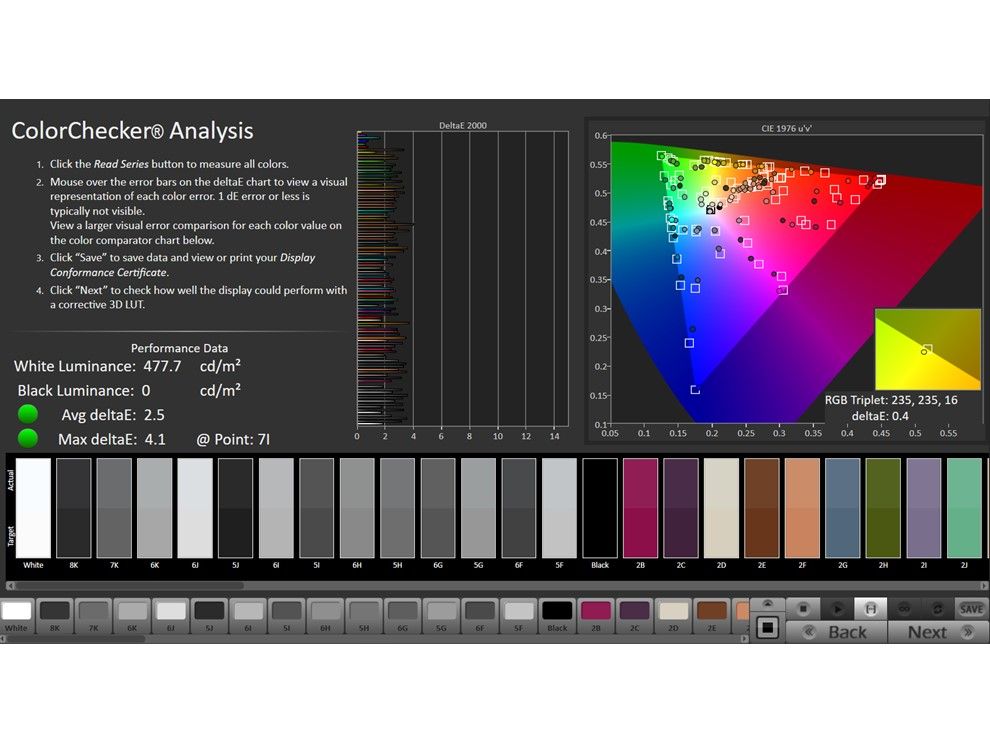 We used Calman Ultimate with a C6 colourimeter to test the display on the Moto G82. In the sRGB (Natural) colour space, the display has an average deltaE value of 2.5 with 97.7% colour gamut coverage and 645 nits of peak brightness. 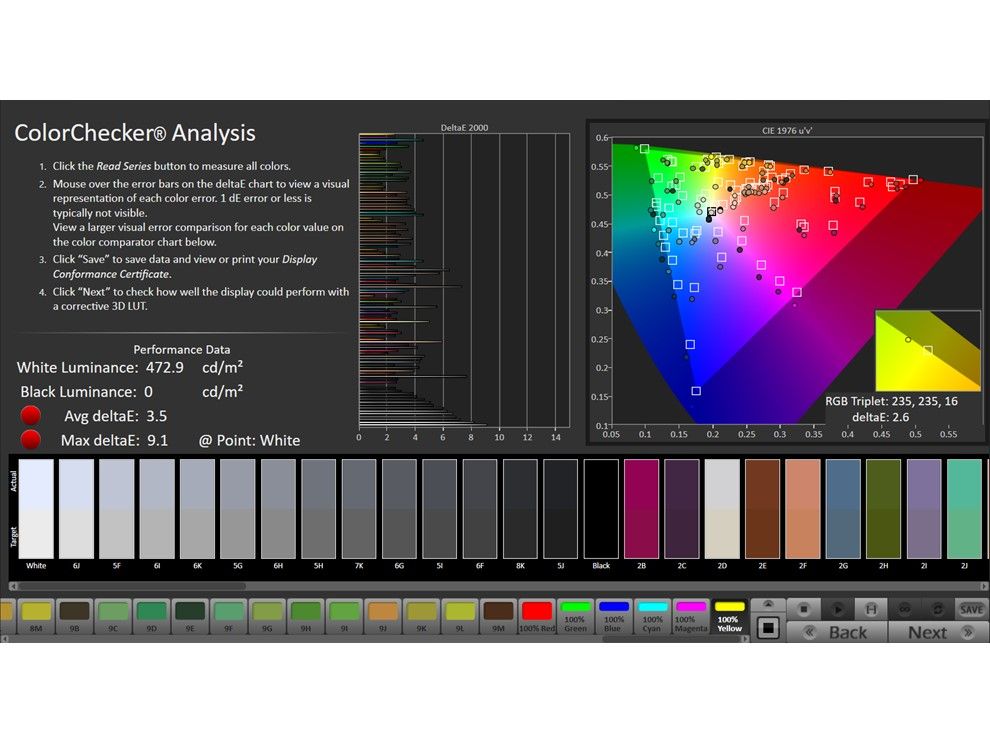 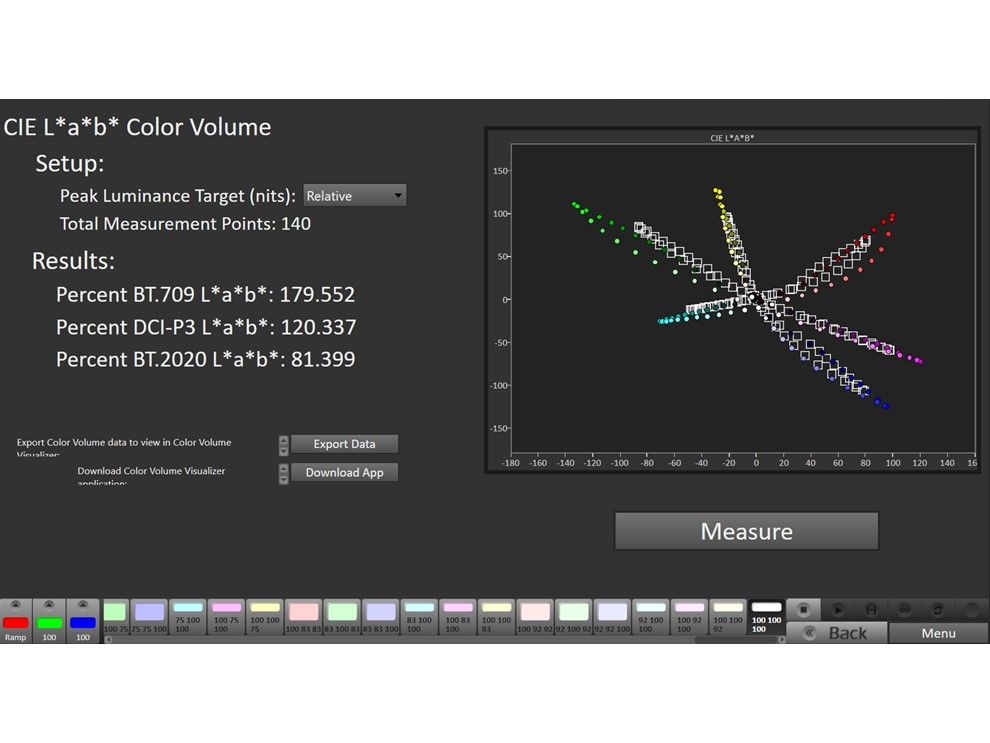 In the DCI-P3 (Saturated) colour space, the display on the G82 has an average deltaE value of 3.5 with 120.3% colour gamut coverage and 908 nits of peak brightness. The display is also biased towards a bit of blue and red hues. All of this goes on to prove that the display is capable of generating a great many colours and can get really bright if needed. 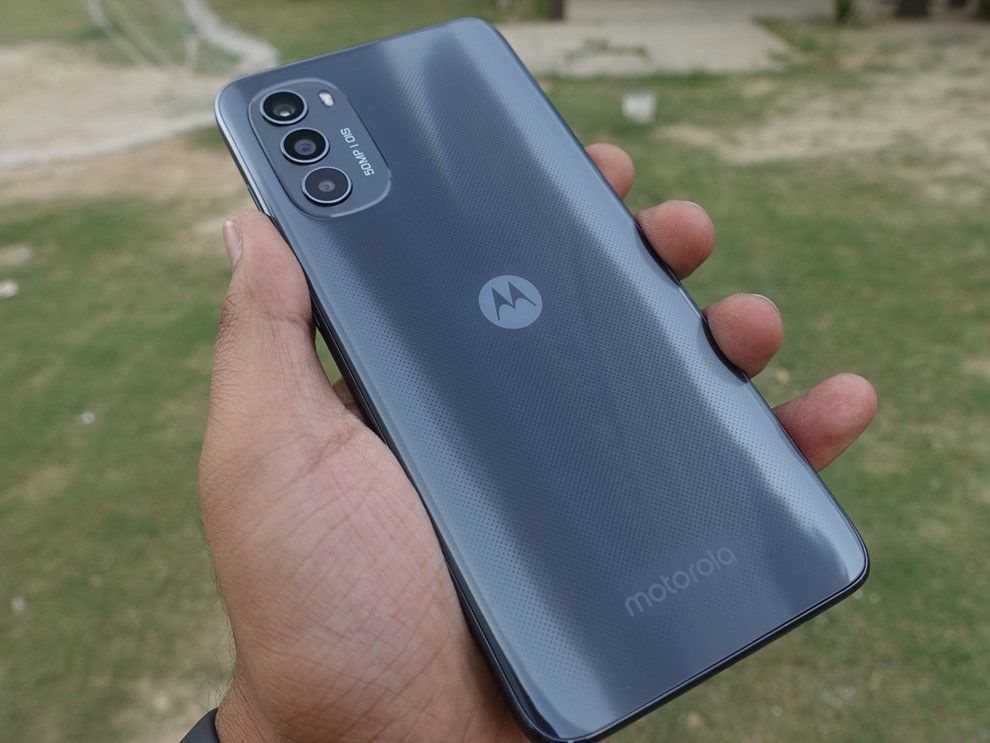 The Moto G82 is pretty thin and lightweight but also very comfortable to hold in the hand with a slightly curved back panel that fits perfectly in the hands. Even though the frame is plastic, it doesn’t feel flimsy and there’s a nice pattern on the back which is also home to a lot of fingerprints and smudges. The volume buttons are positioned slightly higher than normal which could be an issue for those with small hands. Otherwise, it’s built for daily use and will survive the wear and tear easily. It also comes with a pre-applied protective case, so no complaints there.

There are many reasons to buy this phone but none greater than the fact that it runs stock Android 12 yet it lets you customize the little things like fonts, colours, icons, themes and more as a part of the MyUX personalization features. The user interface is clean, slick and a breeze to use.

The Moto G82 is a great mid-range phone for its asking price. It’s a got a beautiful display and a powerful processor that offers smooth performance and its cameras are at par if not better than the competing phones like Note 11 Pro Plus. The battery life remains another great feature of the G82, but you are getting faster charging speeds on the Redmi phone. Yet, the Moto G82 is a strong contender against the Redmi Note 11 Pro Plus this year with its fairly balanced set of features and value on offer.