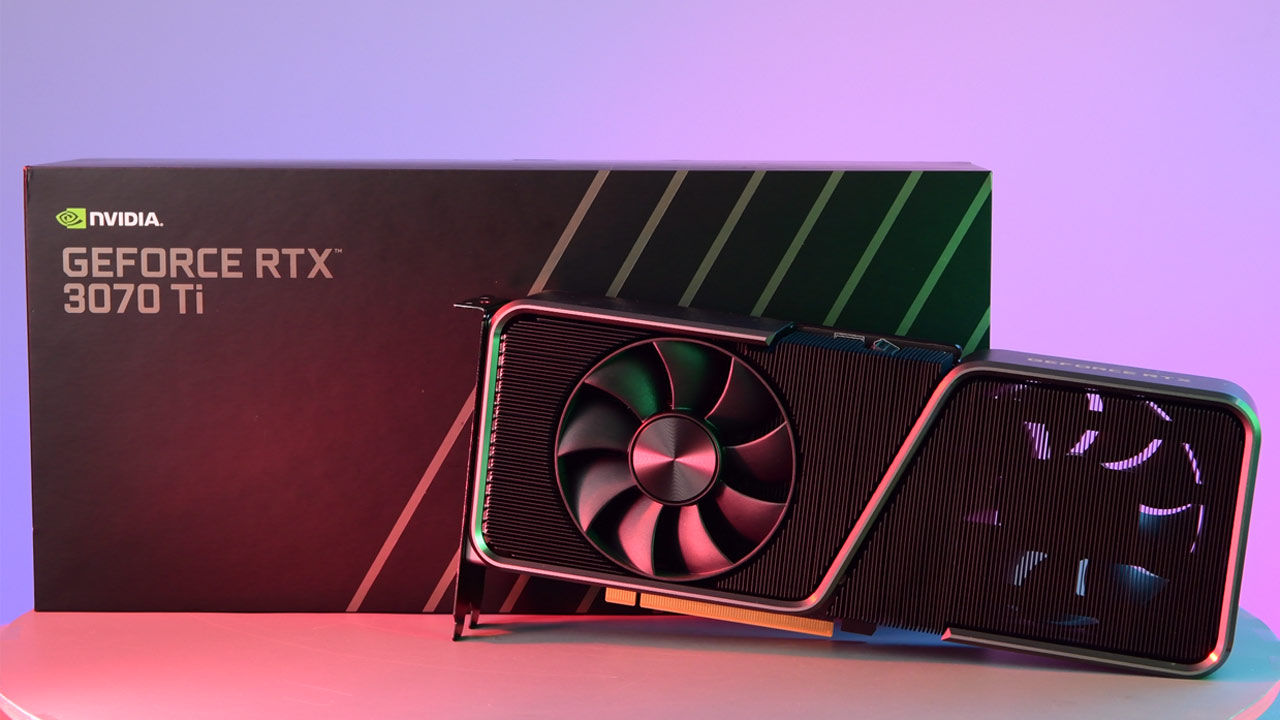 The NVIDIA RTX 3070 Ti has an official price tag of INR 53,500 and you can still get the Founders Edition cards from their official Indian distributor, RPtech, once every couple of months. Partner cards continue to sell for approximately INR 1,20,000 (more than twice the official price) and the prices show no signs of dropping any time soon.

The RTX 3070 Ti, like the RTX 3080 Ti uses GDDR6X memory which offers a decent improvement in bandwidth over the GDDR6 memory that the RTX 3070 uses. However, the bus width remains the same at 256-bit wide. This shouldn’t be seen as a bottleneck since there’s plenty of headroom and the 3070 Ti has a max theoretical memory bandwidth of 608.3 GB/s whereas the RTX 3070 had a max bandwidth of 448 GB/s. The core boost clock is also higher on the RTX 3070 Ti by about 45 MHz while the base clock is higher by 75 MHz.

So you’ve got faster memory, higher bandwidth, higher base and boost clock speeds. Everything seems to be pointing in the right direction. Which leaves us with the core configuration. And that’s where the RTX 3070 Ti falls short of impressing us. Compared to the RTX 3070, the RTX 3070 Ti only has two additional SMs which translates to 256 additional CUDA cores. In an entry level segment, a 2 SM increment is quite a significant upgrade as long as the clock speeds and memory bandwidth are sufficient. In a mid-range or even high-end segment, a 2 SM increment is barely worth anything. And that’s exactly what we will see playing out in the benchmarks.

With the new set of benchmarks, we’ve featured some of the older GTX 10 series cards along with most of the RTX 20 series cards including the Super cards. We also have AMD RX 5000 series cards as well as the latest RDNA 2 based RX 6000 series cards. Also included are the RTX 30 cards that were launched previously. Some of these cards haven’t been retested for close to a year, so we expect some discrepancies since driver optimisations will have improved performance of the older graphics cards in our list.

Like always, we have a section for synthetic benchmarks as well as gaming benchmarks with plenty of charts to showcase differences. Coming to the rig, we’ve tested the cards on an Intel platform.

Let’s start with the synthetic benchmarks.

In 3DMark, we prefer the Fire Strike Ultra benchmark since the Extreme and normal runs have started producing ridiculous scores with newer GPUs. The other benchmark within 3DMark which we use is Time Spy and we run both, the normal run and the extreme run. Here, we’re showcasing Fire Strike Ultra and Time Spy scores. The NVIDIA RTX 3070 Ti scores about 14,416 in TimeSpy which puts it ahead of the RTX 3070’s 12,618 by 14 per cent which is a nice delta. Similarly, in Fire Strike Ultra, the 3070 Ti scores a little over 10 per cent higher than the RTX 3070. TimeSpy scores are at par with the AMD RX 6800 and Fire Strike Ultra scores are about 9-10 per cent higher. So far, it’s looking good in the synthetics.

Basemark GPU is a nice benchmark to compare the performance of different graphics APIs between cards. We can use the same textures with OpenGL, Vulkan and DirectX 12 to see if the graphics card excels at any particular API more than the rest or if the performance is consistent across the board. The RTX 3070 Ti, like all NVIDIA GPUs, has a slight advantage in OpenGL over AMD cards and scores more than 2x that of the RX 6800 XT. And when looking at DirectX 12 and Vulkan benchmarks, we see a 2 per cent and 14 per cent improvement. Compared to the RTX 3070, the 3070 Ti scores about 17 per cent higher on average across all three APIs. 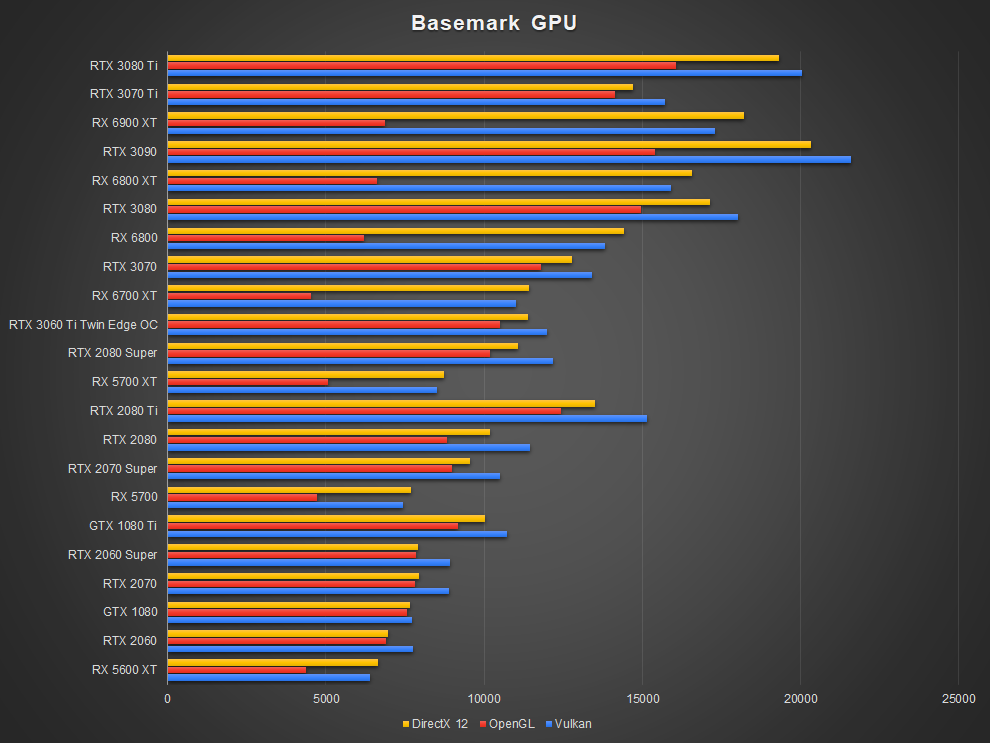 Blender is a great 3D modeling and animation software that’s open-source and it is the preferred tool for folks wanting to get their hands dirty with 3D modeling. We use version 2.8 to keep up with legacy scores that we have for older cards. The latest stable version would be 2.9 and it’s an incremental upgrade. We use the classroom scene since that’s capable of utilising the GPU for rendering the scene aside from the CPU. The RTX 3070 Ti completes the benchmark about 6 seconds faster than the RTX 3070 which is a decent improvement. 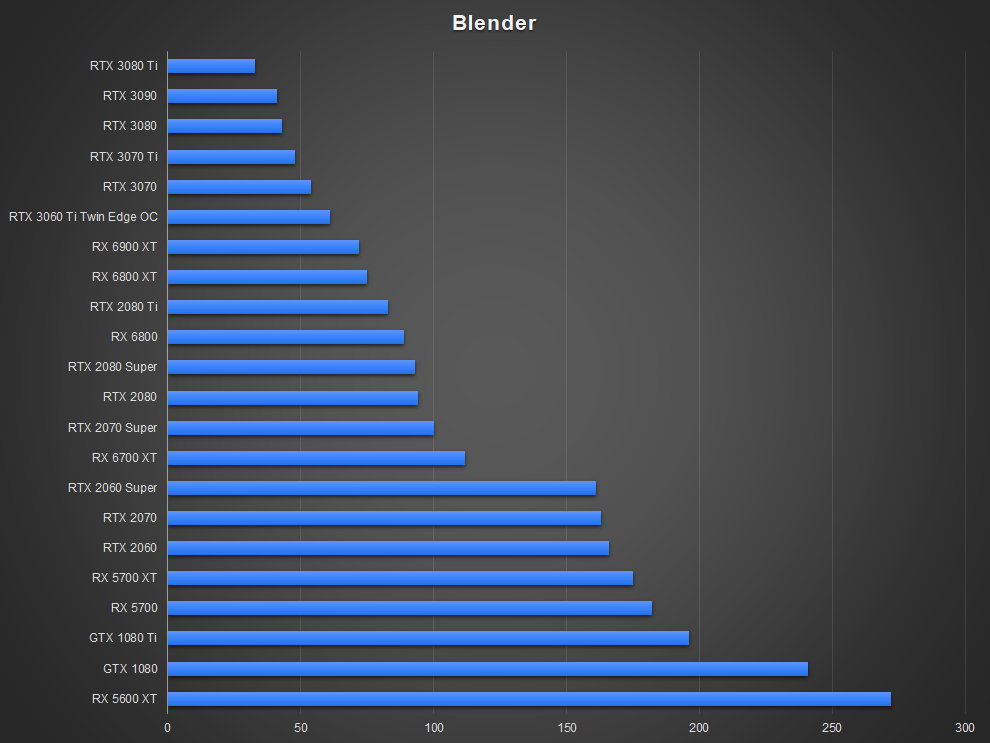 This is the latest synthetic to be added to our test suite. IndigoBench is based on the Indigo 4 rendering engine that’s available for popular software such as SketchUp, Blender, 3ds Max, Cinema 4D, Revit and Maya. It uses OpenCL and can benchmark both, the CPU and GPU together or individually. We prefer to test just the GPU with the software and the score provided is in terms of .M samples/s’. With a much higher memory bandwidth, the RTX 3070 Ti scores way ahead of the RTX 3070. In fact, it’s a significant upgrade if you go by just the synthetic benchmark numbers.

Unigine SuperPosition is the other popular DX11 benchmark which we prefer to use alongside 3DMark. We run it on the Extreme Quality preset and use the score metric for delineating the performance between graphics cards. There’s barely any difference in Unigine Superposition, the difference comes down to less than 1 FPS on average between the RTX 3070 Ti and the RTX 3070. 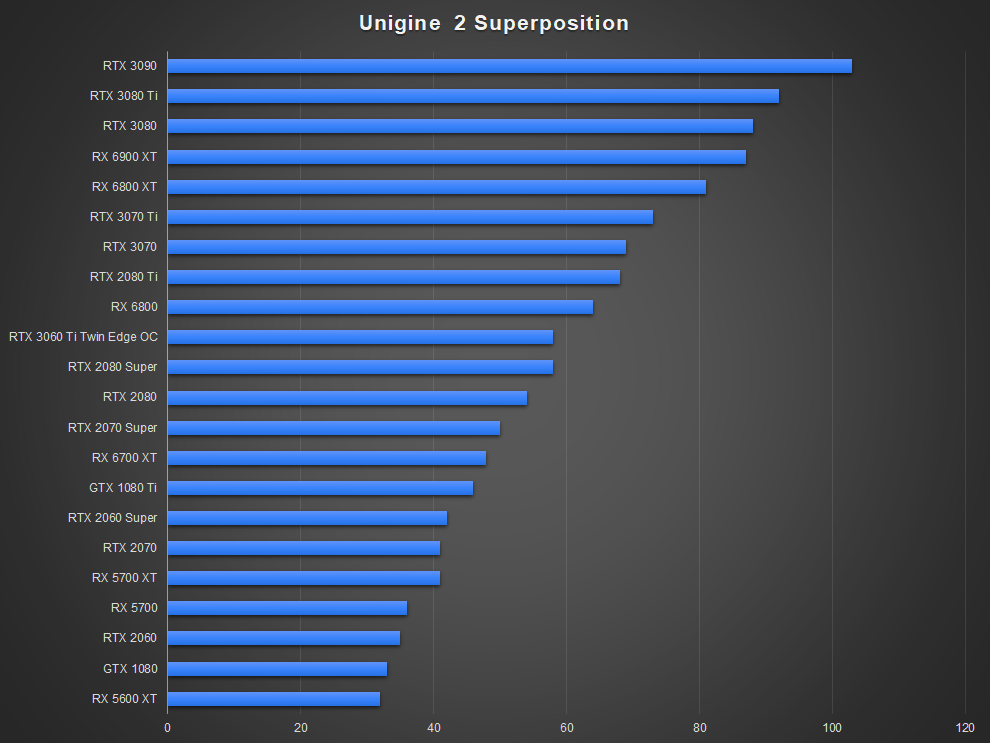 Gearbox’s latest game in the Borderlands franchise which uses Unreal Engine 4 and allows you to switch between DirectX 11 and 12. The game has an inbuilt benchmark which takes you through an array of stressful scenarios. The DirectX 12 version is quite flaky and we prefer to use the DirectX 11 API while benchmarking the game and all our existing data is based off the DX11 version so there’s no point switching now. In Borderlands 3, the RTX 3070 Ti scores about the same as the RTX 3070. At higher resolutions, you can see a difference of about 4-5 FPS. 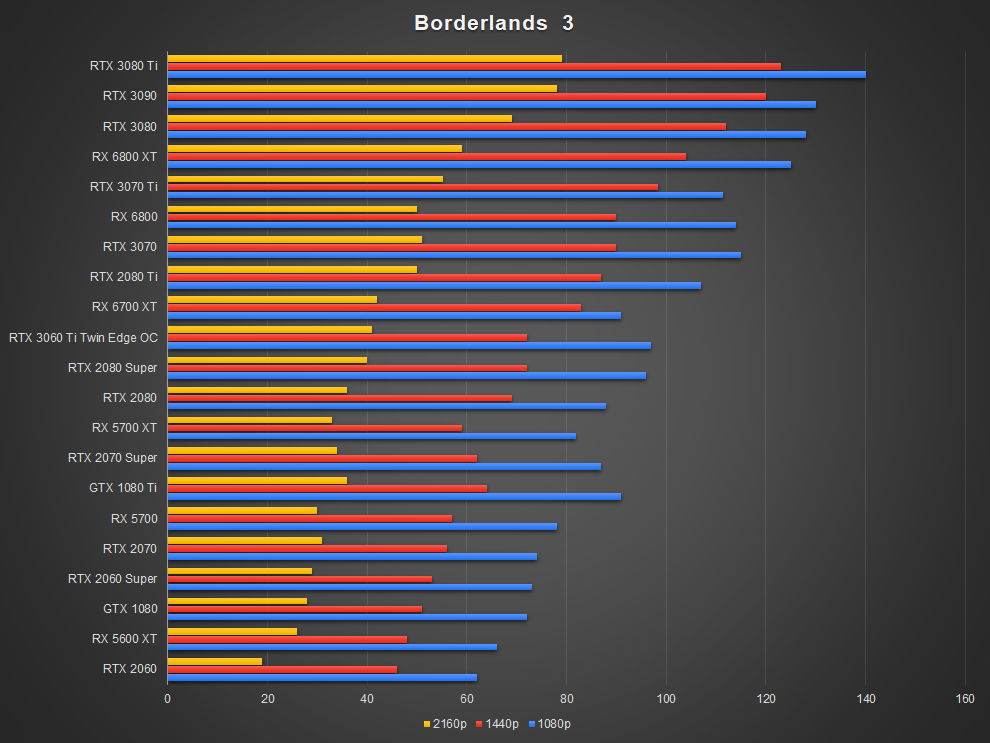 Hideo Kojima’s Death Stranding has been a recent addition to the PC scene and had been a PlayStation exclusive until July 2020. Being a console game, the game engine is quite optimised to make use of the scarce resources one gets with consoles. However, when 505 Games ported the game to PC, you wouldn’t end up calling the game a console port. The Decima game engine is capable of rendering up to 4K and can use high dynamic-range imaging and is also geared for the upcoming next-gen PlayStation console. It’s also the same engine used by Horizon Zero Dawn. In Death Stranding, we see about a 5 per cent improvement in 1440p and 4K resolutions. That’s literally as many in FPS. 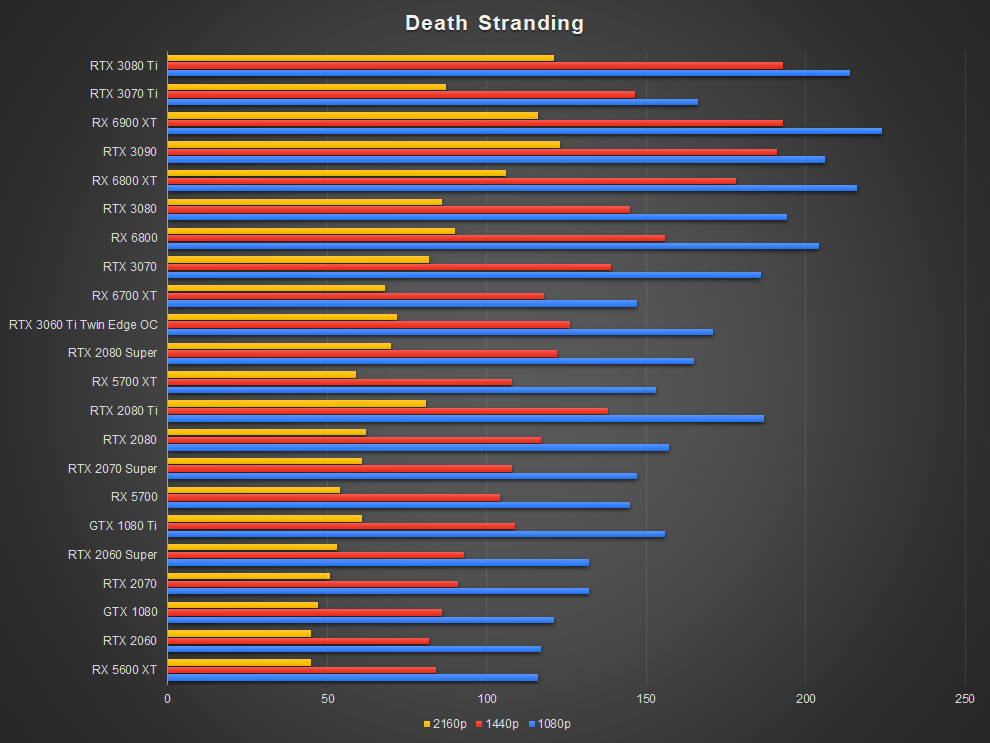 Doom Eternal takes the story forward from the 2016 DOOM and it does it in spectacular fashion. It’s also one of the new games to incorporate ray-tracing as an update. The game is based on the latest Id Tech 7 game engine from Bethesda and is tremendously optimised for current gen hardware. Unlike the previous DOOM which allowed you to choose between DirectX and Vulkan, Doom Eternal is locked to Vulkan and makes use of RTX to level-up the ingame visuals. We keep the FOV at default with all the other graphics settings cranked up to Ultra Nightmare. Motion Blur is switched off across all runs because it takes away from the visual fidelity and makes running a benchmark kinda pointless. The story in DOOM Eternal is no different with the same level of performance improvement seen in terms of percentile. 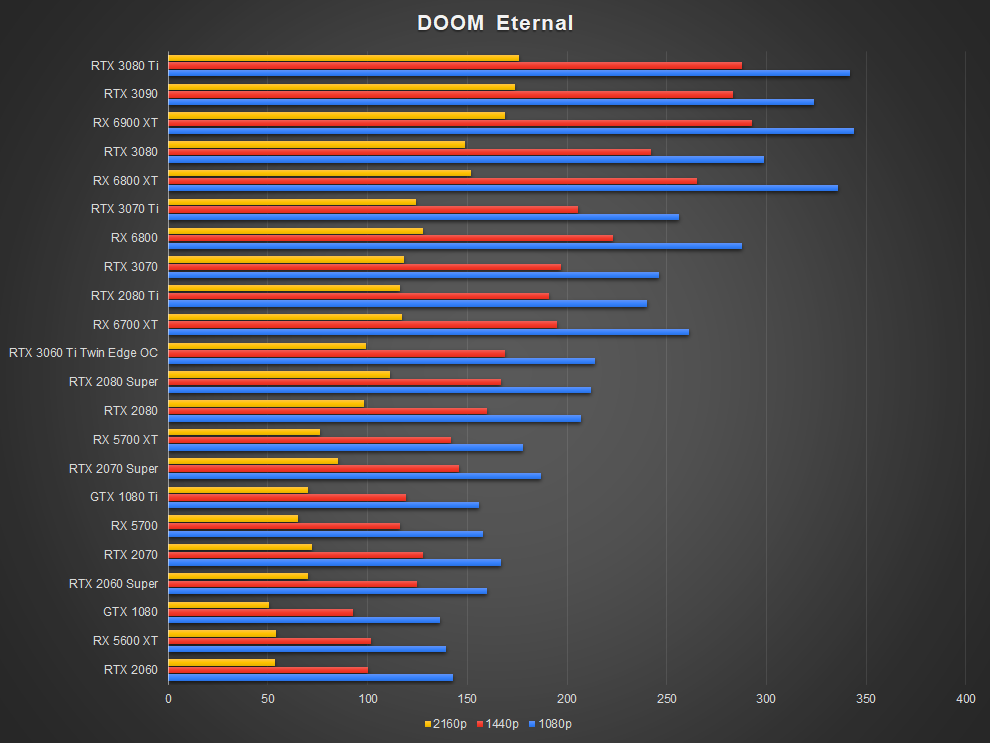 Shadow of the Tomb Raider

We run Shadow of the Tomb Raider in DirectX12 mode. It ends up consuming a little more memory as most games that support both DirectX 11 and DirectX 12. The preset is set to the highest quality and HBAO+ enabled. The ingame benchmark tool takes us through several scenes which feature open spaces as well as closed spaces with lots of world detail aside from the central character. In Shadow of the Tomb Raider, we see a much higher delta of about 31 per cent at 1080p but that’s more to do with the improvements that the developers have been incorporating over the years. Patch 2.01 that was released recently remastered the game to fix memory and loading issues so the scores are not comparable with our scores from back when we tested the RTX 3070. 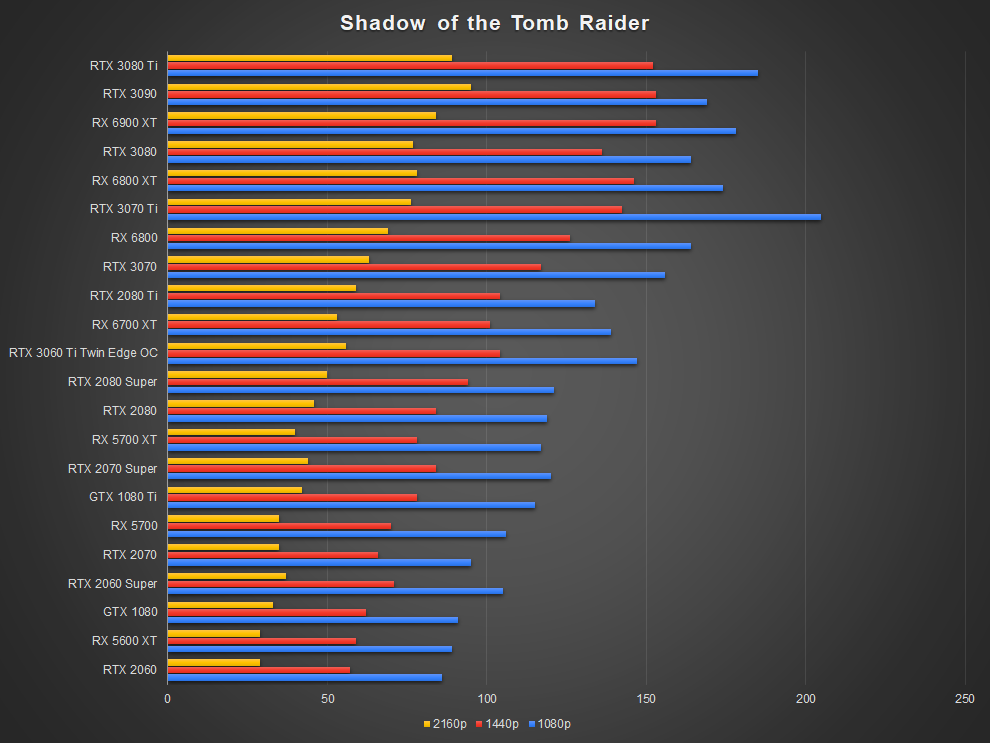 The Witcher 3: Wild Hunt is yet another game wherein we can see the generational improvements quite clearly as the game is still capable of stressing the top-end graphics cards. We switch off NVIDIA Hairworks in our bench runs since it’s a proprietary NVIDIA feature and that messes up the performance measurements between AMD and NVIDIA cards. In Witcher 3, we see a performance improvement of 1-4 per cent at 1080p and 1440p with 4K gaming showing a much higher 15 per cent improvement. 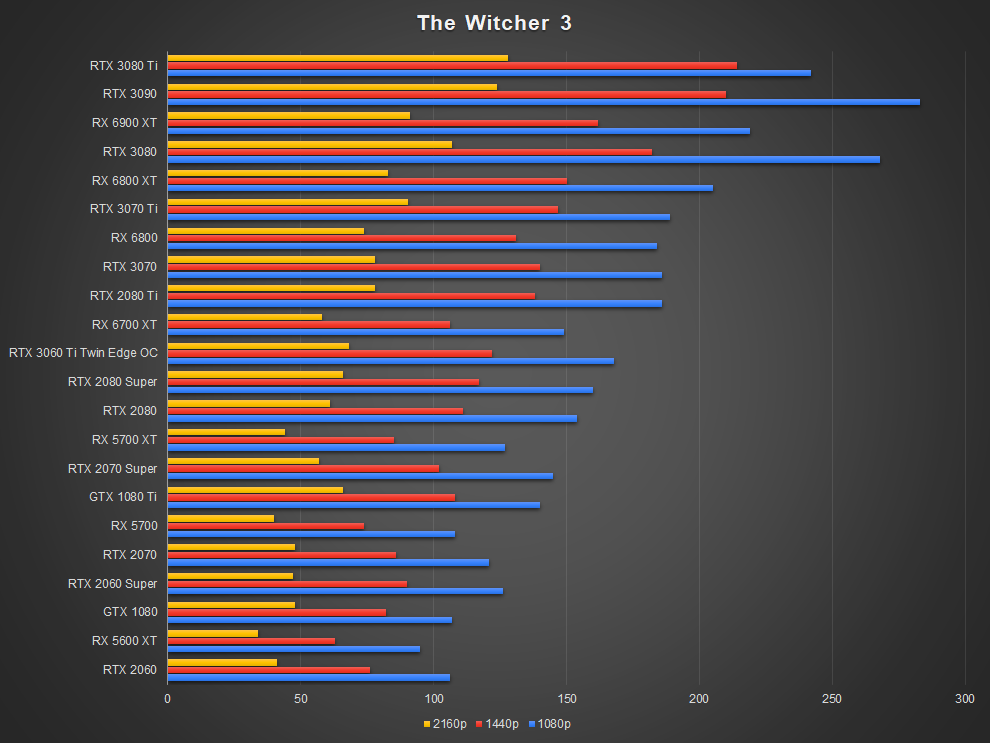 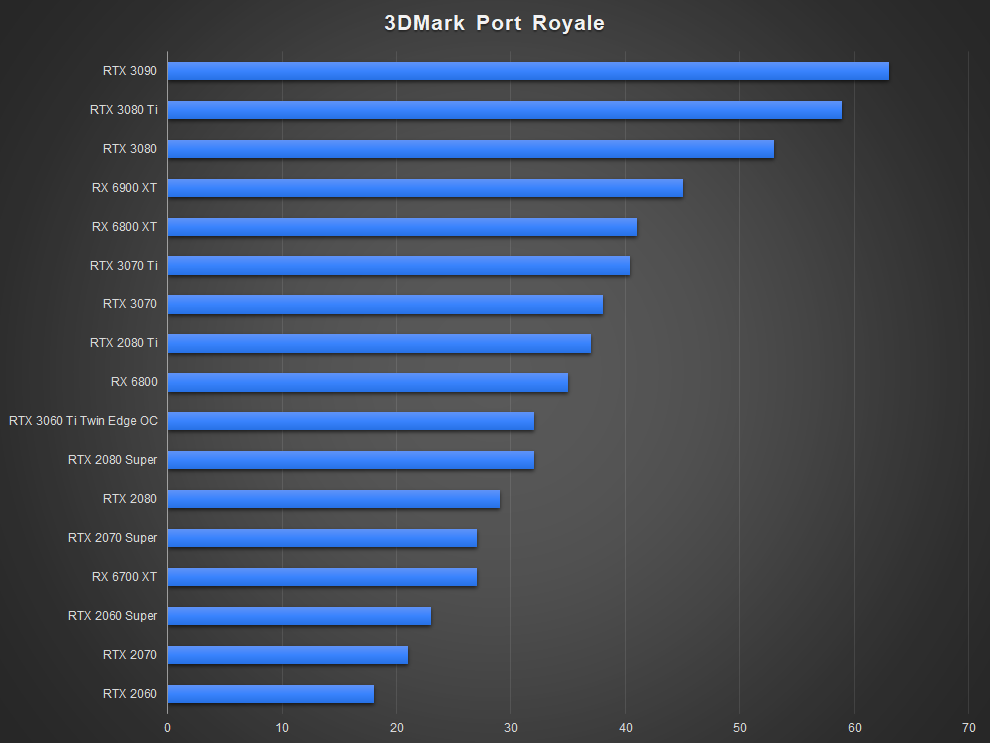 The NVIDIA GeForce RTX 3070 Ti has an official price of INR 53,500 for the Founders Edition graphics cards while the partner cards cost about INR 1,20,000 in India owing to the GPU shortage issue. Industry reports had indicated that GPU prices would have normalised around mid-September and we did see a significant price drop towards the end of July but prices have since then stagnated and show no signs of dropping. However, we can no longer blame the global chip shortage for the high prices since practically every major computer parts store has been putting out plenty of units for sale. Even their social media handles are littered with photos showing massive cartons and entire walls lined with graphics cards.

The NVIDIA GeForce RTX 3070 Ti puts gamers in an odd predicament. There’s barely any performance to be gained with the RTX 3070 Ti since it’s practically similar to the RTX 3070’s performance but has a much higher price tag. Officially, you’d be shelling about INR 10K for 1-5 per cent additional performance but in reality, you’re paying INR 20-35K. There’s no way gamers can make any sense of this price-to-performance factor but if you happen to be a content creator, then the 3070 Ti is indeed worth the additional 10K.