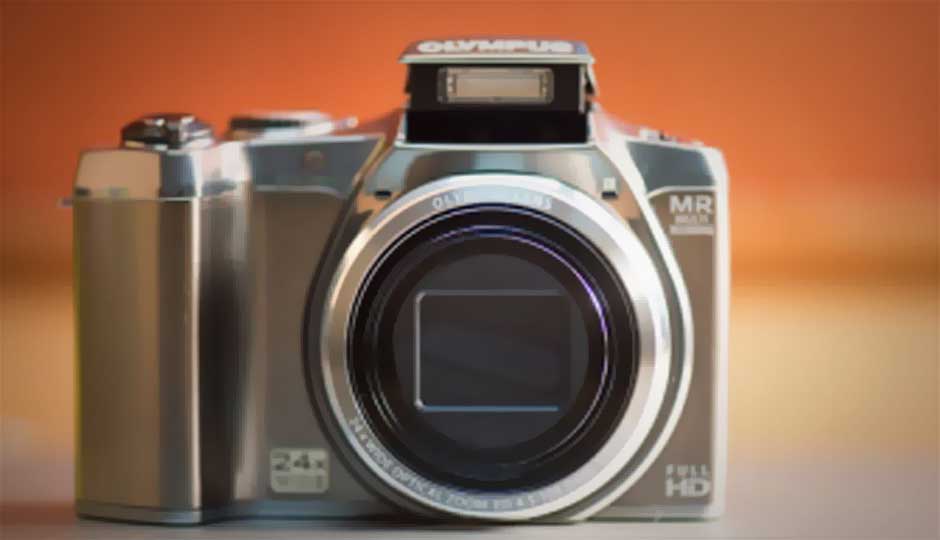 Travel zooms normally have a reputation of being slim, flat pieces of well-constructed plastic / polycarbonate / metal shells housing a deceitfully large lens. These slabs can easily be pocketed and are often confused for a ‘regular’ point-and-shoot. And then comes along Olympus with its SZ-31MR with a slightly bulky body (still very much pocketable mind you), but rather curvaceous design. The hand grip juts out quite sharply, curving back in to form an interesting hump. The camera definitely raised an eyebrow (or two) around out test center with its unconventional looks, but in the end, what we really cared about is whether it can perform or not!

As we’ve already stated, the Olympus SZ-31MR isn’t just curvy, but it rocks some pretty eccentric curves. The top of the travel zoom camera features only the shutter button (along with the zoom toggle) and a mode dial. The far end on the left of the top is a small switch that can be pressed to release the pop-up flash. The back is equally elegant, with all buttons neatly arranged on the right side of the screen. On the top, we have the dedicated record button and at the bottom, a dial for flipping through images and menu options, a dedicated button to access the menu and a playback button. All in all, a very simple layout.

Holding the camera feels nice, without the weight being a problem. Whether the lens was at its widest angle, or extended to its maximum telephoto range, the weight is evenly distributed, mostly around the center, preventing the camera from tipping forward.

The model we received was the grey coloured one, which lent it a rather metallic look and feel. The camera is actually constructed from plastic, but it feels very well built. Regardless, we wouldn’t drop it no matter what.

The Olympus SZ-31MR is packed with a 16 megapixel slab of silicon along with Olympus’s proprietary Dual TruPic V image processing chips. A 24x optical zoom lens (25-600mm equivalent) allows you to capture exactly what you want, whether it’s a wide angle shot or something that’s far off in the distance. While all this sounds good and fancy in a marketing campaign, we sat down with the camera and saw whether it could actually deliver the quality one would expect from a camera with such impressive specs.

First, we took the camera for a spin in the great outdoors, to see how it would cope with real world usage. Image quality at both the widest and the most telephoto end was surprisingly good (especially at the telephoto end) with very little JPG compression artefact. This was a surprise to us as most of the travel zooms we’ve tested so far have exhibited medium to severe JPG artefact at the telephoto end. The dynamic range seemed to be on the lower end though, with a tendency for the camera to focus more on the shadows, and consequently, blow out the highlights. With a 1/2.3 inch sensor, one can’t expect really high dynamic range, but we do wish the camera would have struck a better balance between the highlights and the shadows. Colour reproduction was excellent with vivid greens, rich blues and deep reds being rendered just as such; vivid, rich and deep. The images showed a good level of contrast in most situations except when shooting wide under the midday sun, where they had a tendency to fade out a bit.

We tested the sharpness and ISO performance of the Olympus SZ-31MR by shooting our standard test target indoors and examining the centre along with the left and right edges of the frame. Centre and edge sharpness at ISO 100 was reasonably good, as one would expect. ISO 200 through 400 maintains the sharpness levels and is noise free, along with keeping detail in the image more or less intact (very little JPG artefact). However, at ISO 800, the edge sharpness seemed to drop noticeably, along with noise reduction algorithms becoming a little aggressive. Once we were hitting the quadruple digits on the ISO chart, things started turning bad. Visible noise crept into the image at ISO 1600 with an overall dip in sharpness. ISO 3200 and 6400 were just too grainy for us to deem useable.


One thing we noted during the use of the Olympus SZ-31MR was that when we were zoomed in, about 10x and above, there seemed to be some form of noise being emitted from the lens assembly. We’d like to believe it was from the focus/stabilization mechanism, but what eventually happened was that the noise crept into our video recordings. It could also possibly be a problem with our specific review unit.

The video resolution on the Olympus SZ-31MR is full 1080p HD and as one would expect, the video quality is superb. The footage shot in daylight is crisp and sharp with vibrant colours, but in low light, the red and brown shades had a tendency to develop noise rather quickly. However, we were quite amazed by the autofocus system’s ability to track and re-acquire focus during out intensive zoom-in-zoom-out session, something we haven’t seen in most other travel zooms.

Verdict
Overall, as a travel zoom with 24x optical zoom and a 16 megapixel sensor packed together with dual TruPic processors, the SZ-31MR does deliver decent image quality during the daytime. However, low light quality can take a hit especially if the ISO numbers jump into the 4-digit realm. If image quality is of utmost importance, we’d recommend going with the Canon SX240 HS or the Sony HX20V.

However, if you like unconventional looks and elegant curves, the Olympus SZ-31MR is definitely the camera for you. Its unconventional design and fairly good image quality does make it a good buy.