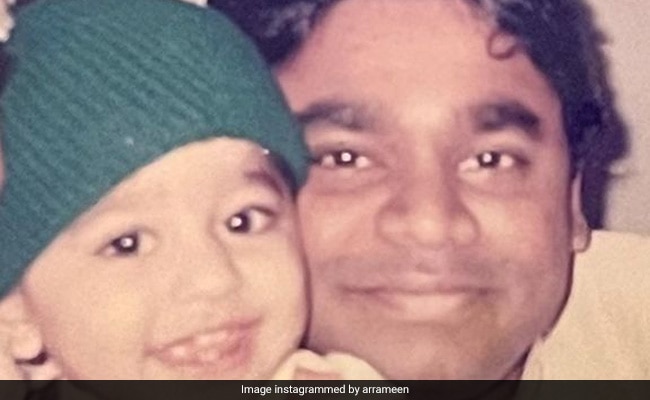 Singer and music composer AR Rahman has turned a year older today. The composer is receiving a lot of love from his fans and colleagues on the occasion. Among the flurry of messages also came a note from his son AR Ameen. Today is also AR Ameen’s birthday. On the happy occasion, AR Ameen shared two images with his father. While the first photo shows them working together, the second image is a throwback gem of the father-son duo. In the caption, he said, “Happy birthday to my everything, blessed to have you as my father and my teacher, love you so much,” with heart emojis. Singer Neeti Mohan replied saying, “Happy Birthday, Ameen. God bless you.” Fans too wished father and son on the special day.

Recently, AR Rahman was seen with his son in another photo that made headlines. The father-son duo were joined by superstar Rajinikanth and his daughter Aishwaryaa Rajinikanth in a plane. The images show the group smiling for the selfies clicked by AR Rahman. In the caption, Ameen dropped heart and rocket emojis and said: “This picture is too goated.” Singer Harshdeep Kaur dropped heart-eye emojis.

Aishwaryaa Rajinikanth too shared an image of AR Rahman and Rajinikanth recently. “When two amazing human beings meet and you happen to be the reason ..you are blessed and of course, they are the best! AR Rahman sir and Appa,” she wrote.

AR Rahman has shared several images of his interaction with Rajinikanth in the past few months. He recently shared an image of the actor watching the composer’s virtual reality film Le Musk. “Check who is watching Le Musk Superstar Rajinikanth,” AR Rahman wrote in the caption.

During the course of his illustrious career, AR Rahman won two Grammy Awards, in 2010, and two Academy Awards in 2009.