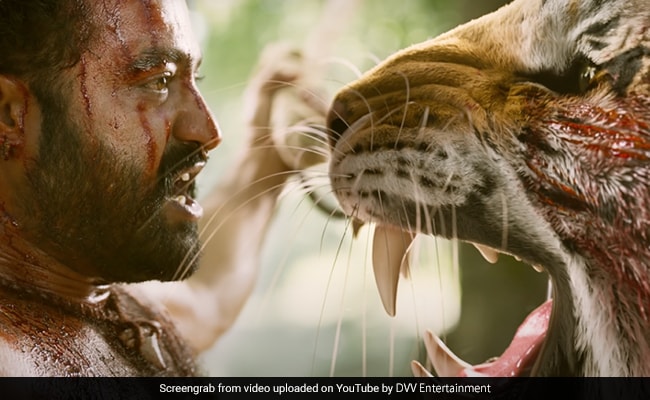 Jr NTR in a still from RRR. (courtesy: YouTube)

SS Rajamouli’s magnum opus RRR is unstoppable and how. After a huge success at home, the film has been making waves in Hollywood. Ram Charan and Jr NTR’s film not just garnered praise from prominent west stars but also earned spots on the longlist and shortlist of the British Academy of Film and Television Arts (BAFTA) and Oscars, respectively. Now, joining the list of Hollywood stars who were left stunned by the magic that SS Rajamouli created on the big screen with RRR is Academy Award-winning actress Jessica Chastain. She recently watched the film and liked it very much. For her, it was like a “party.” On Friday, Jessica retweeted a post on RRR and wrote, “Watching this film was such a party (red heart icon).” FYI: RRR’s song Naatu Naatu has been shortlisted in the Best Original Song category at the Oscars.

A few hours after the actress shared her review of RRR, the makers of the film thanked her for making them “happy.” Replying to her tweet, they wrote, “Jessica, you enjoying RRR made us happy.”

Here’s what the makers of RRR shared via their official Twitter handle:

Jessica, you enjoying RRR made us happy ???? https://t.co/NcHlc1HpLX

RRR, on Friday, made it to the longlist of BAFTA in the Best Film (Non English) category. The makers announced the big news on social media with a post that read, “Very happy to share that RRR is in the LONGLIST of BAFTA Film Awards. Thank you, everyone.” After the nominations on January 19, the awards will be announced on February 19.

That’s not it. For the 80th Golden Globe Awards, RRR earned nods in two categories – Best Picture (Non-English Language) and Best Original Song for Naatu Naatu. The awards will take place in Los Angeles on January 11.

The Internet also celebrated the “historic moment” when RRR song Naatu Naatu made it to the Oscars 2023 shortlist for Best Original Song. The final nominations will be announced on January 24.