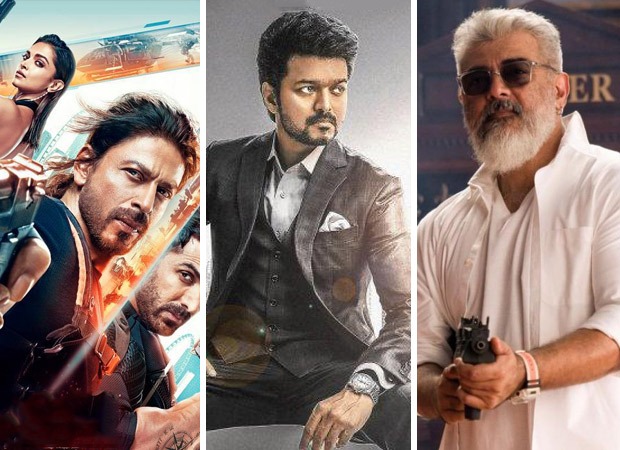 Yash Raj Films promises Pathaan to be the biggest ever action spectacle that audiences have ever seen on the big screen. Touted to be a visually spectacular action extravaganza, Pathaan, is part of Aditya Chopra’s ambitious spy universe. The trailer of the film featuring Shah Rukh Khan, Deepika Padukone and John Abraham released earlier today and the makers have dropped yet another interesting update about the film. From what we hear, Pathaan, which will also release in two more languages apart from Hindi, will have its Tamil trailer attached to Thalapathy Vijay starrer Varisu and Ajith starrer Thunivu.

A source close to the production house confirmed this information adding, “The Tamil trailer of Pathaan will get the biggest ever showcasing for a Hindi film trailer as it will play on both Varisu and Thunivu which releases during the massive Pongal holiday season. Interestingly, this is being touted as the biggest clash in Tamil cinema in recent times as Thalapathy Vijay and Ajith Kumar are locking horns after eight long years! Given the decibel level of the clash, Pathaan’s trailer being played on both films means the Shah Rukh Khan starrer will hog all the attention amongst Tamil cinegoers in this crucial holiday period.”

While the Hindi trailer was unveiled by the production house, Thalapathy Vijay, who is also a close friend of Shah Rukh Khan, unveiled the Tamil trailer of Pathaan on social media.

Directed by Siddharth Anand, the film is also expected to be a part of the spy universe which includes the Tiger franchise. Interestingly, it is being said that Salman Khan too will be doing an interesting cameo in this action entertainer. On the other hand, Shah Rukh Khan is expected to appear as Pathaan in the forthcoming Tiger film. While Deepika Padukone too essays the character of a spy, John Abraham will be seen as the antagonist. Pathaan is set to release on January 25, 2023 in Hindi, Tamil and Telugu.