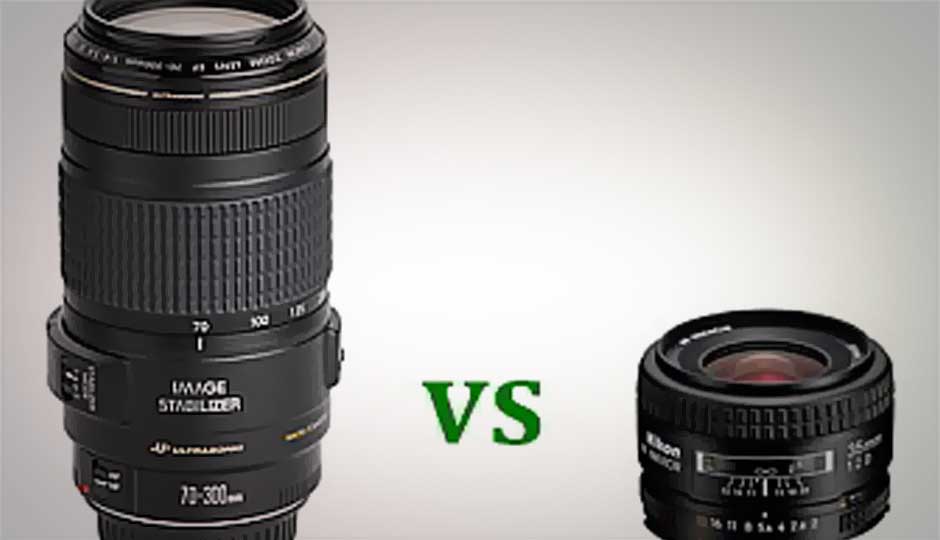 Most skilled photographers will confess that when it comes to investing in photography equipment, they’d much rather invest in lenses than bodies. Camera bodies come and go, but lenses stay. Lenses can make or break an image (or the spirit of the photographer) and since they cost anything from a couple of dinner dates to as much as a new car, I figured I’d share a few insights into the world of those sleek long glass encasing tubes that allow our sensors to see. I will not get into the different lenses for specific styles of photography, but instead, I’ll discuss the two primary types of lenses out there; Prime and Zoom.

Prime lenses are also known as fixed focal length lenses. They do not zoom in or out, meaning your field of view is absolutely fixed, unless you decide to do a little “foot-zooming,” which is great if you’re on the “extra healthy” side. Zoom lenses, on the other hand, allow the convenience of a variable field of view that can go from wide angle to extreme telephoto. Both these lenses have their advantages and disadvantages and the choice for adopting one or the other (most photographers have both in their kits) and through understanding their basic nature, you can decide in which situations require the use of primes and which situations favor the zoom.

One of the foremost reasons why photographers pick up a prime lens is because how wide the aperture on these things can go. Due to the laws of physics, or our limited understanding of, we have only successfully managed to design zoom lenses with a maximum aperture opening of f/2.8. Designing a zoom lens with a faster aperture would violate basic principles of sound economics and probably drive lens prices north of what a car would cost (not that some lenses already don’t cost that much). It also has something to do with how much glass you can pack into a metal tube while maintaining the optimum quality of light. This is where prime lenses outshine their zoom counterparts. Almost literally. A standard prime lens has an aperture of f/1.8, which is almost a stop and a third faster than the zoom counterpart. This means you can easily drop your ISO from, let’s say, 800 to 600 or just increase your shutter speed (obviously, this is assuming you are shooting at f/1.8). The faster the aperture on your lens, the more room you have to adjust the shutter speed and the ISO on your camera. This knowledge comes in very handy when you’re a concert photographer like me.

One thing we are all taught, or at least familiarized with is that the aperture on a lens is directly in control of the “bokeh” (background blur) in one’s photograph. This is only partly true. The aperture does allow for a manipulation of bokeh, but sensor size and focal length also play a very prominent role in how much background blur you will get. For sensors, the rule is: smaller the sensor, lesser the background blur. For focal length, longer the focal length being used, the more background blur you get. For example, while shooting with Sigma 50mm lens mounted on a Canon 40D set to aperture value of f/1.4, the amount of background blur I get could easily be matched by a Canon 135 f/2.0 lens mounted on the same camera, but with the aperture set to f/2.0. The larger focal length allows for more blur. I doubt there is a specific calculator for the amount of blur you will get for a given focal length at a set aperture, but experienced photographers will agree with me here*. One thing to keep in mind with this rule is that here I have assumed that the distance between the subject and the camera is either the same, or that the distance is manipulated so that the effective field of view with both the setups is roughly the same. If this isn’t clear, hound me in the comments to make it clearer.

Shot using the Canon 85mm f/1.8 lens on a Canon 40D at f/2.0. The shallow depth of field due to the long focal length, short camera-to-subject distance and a lareg aperture (f/2.0) allows for just the leaf to be in focus.


Shot with the Canon 40D with a Sigma 30mm f/1.4 prime lens. The two Kendo warriors were shot at f/2.0, yet we see a considerably large depth of field, thanks to the ‘wide-angle’ nature of the lens.

The primary reasons most photographers, pro and amateur alike; commit a zoom lens to their kit is because of the convenience they offer. The kit for one of the Infected Mushroom concerts I shot consisted of a 1D MarkIII with a canon 24-70 f/2.8 and a 40D with a Sigma 30mm f/1.4 along with the customary Canon 580 EXII flashlights mounted on both the cameras. This was my third Infected Mushroom concert I was shooting, but the first in which I used a Zoom lens and I found myself so at peace, just standing in one spot, able to get both wide and telephoto (closeup) shots of any member of the band. Yes. I could stand in one place and capture all four members of the band. I hardly used the 40D that night and my Sigma 30mm lens felt the same way Woody felt when Andy gets Buzz Lightyear (shame on you if you don’t get this reference).

This extreme close up of Infected Mushroom’s drummer was made possible by the Canon 70-200mm f/2.8 L IS lens mounted on a 1D MarkIII.

I recall running around the venue like crazy for the first two concerts because the only lens I had at the time was my Sigma 30mm f/1.4 mounted on a 40D and it was absolutely maddening. I was often scared of getting smacked by the artist because I was getting too close to them to get the perfect close-up shot of them. Thankfully, my tally of getting punched out on a shoot still remains at a very comforting zero.

Now this is a tricky one. Image quality is as subjective as it can get. For me, when I speak of image quality, I will be referring to the following:

Now as a prime shooter, my first instinct is to yell out that prime lenses top all two of those criteria, but I’ll take the more civil route (also because you can’t really “yell” on an online post). So first, let’s tackle Sharpness.

Sharpness is a factor of how well two components play together; glass quality and lens design. Well, everything about image quality is a factor of the quality of glass (actually sand) used to make the lens (because glass is made of sand). One statement that is often made about lenses is that the sharpness takes a small hit at the largest aperture. Stop the aperture down by 2/3 or a whole stop and you see the lens go from a butter knife to a katana. While the cheaper lenses (sub $300-$400) do exhibit such behavior, the more expensive L series lenses are somewhat resistant to this behavior. During my stint with the Canon 24-70 f/2.8 (I used this lens for a little over 2 years), the lens was pretty sharp at f/2.8, its maximum aperture, but the sharpness noticeably increased when I stopped it down to f/4.0. The images at f/2.8 were by no means soft nor did they appear blurry or out of focus, but something about the f/4 image made the difference noticeable. Swapping out the 24-70 f/2.8 for the Sigma 50mm f/1.4 and I notice similar behavior. The lens is pretty sharp at f/1.4 (although the ridiculously shallow depth of field would have newbies thinking otherwise) but stopped down to f/1.8 this lens becomes tack sharp.

The more expensive lenses have more finely tuned optical designs (along with a ton of glass elements inside) to deliver maximum sharpness at any given aperture, but this difference in sharpness becomes apparent as we go from a more expensive lens to it’s cheaper variant. For example, which shooting with the two Canon kit lenses (the 18-55 IS and NON IS), I noticed that at 55mm, the maximum aperture of f/5.6 gave me images that were noticeably soft, but going to f/8 fixed that. Between f/5.6 and f/8, that’s a whole stop of light you’re losing right there. God help you if you’re trying to handhold a shot in low light.

This was also shot on the 40D with the 85mm f/1.8 lens mounted. Moving to the minimum focussing distance of the 85mm lens, we used an aperture of f/2.0. Even at f/2.0, the image was tack sharp, something that can’t be said for many zoom lenses.

Second on the list is barrel distortion. There isn’t much to say about this, though I will try and not leave anything unsaid. Barrel distortion is the nature of a lens to produce a slightly bulged image (following the shape of the curved glass elements). The wider the lens, the more prominent this effect, however between zoom and primes lenses at the same focal length, a prime lens will produce noticeably less barrel distortion.

Prime vs. Zoom Lenses: Effectiveness as a Tool of Learning

I guess one could chalk this up to a “personal preference,” but many photographers I have spoken to or read, confess that their humble beginnings involved the use of prime lenses. I personally started shooting using a really old film camera, with a 50mm f/1.4 lens (manual focus too!). Unfortunately, the advent of digital photography has caused a certain level of decline in the way people approach photography. My mentor shot with homemade cameras, 8×4’s, cameras that used glass slides to record images etc. He develops his own negatives and makes him own prints. He encouraged me to shoot film, using a 50mm prime lens only (no wide angle, no zoom, none of that fancy stuff). If you thought that shooting a prime on a DSLR was tough, try shooting film with a prime. Every time you press the shutter, it costs money! In order to save my film (and money and time and money) I became extremely selective of what I shot and how I shot it. I put in a lot of thought into what I was going to capture; using the tools I had been given. Using a prime lens exclusively forced me to learn one of the most essential lessons needed to be a photographer – The Rules of Composition. Prime lenses are an excellent tool to understand composition as the lack of zoom forces you to be innovative.

The bottom-line, in my opinion, is that primes trump zooms in terms of image quality (of course when comparing lenses of an equal caliber/price range) and also they beat zooms when it comes to aperture values (and hence sharpness at lower apertures), zooms definitely have the upper hand when it comes to convenience. They both have their own arenas where they trump the other, so it essentially breaks down to the kind of style and work you as a photographer are trying to develop. I will now close this post with a strong recommendation that you must, as a photographer, do two things: