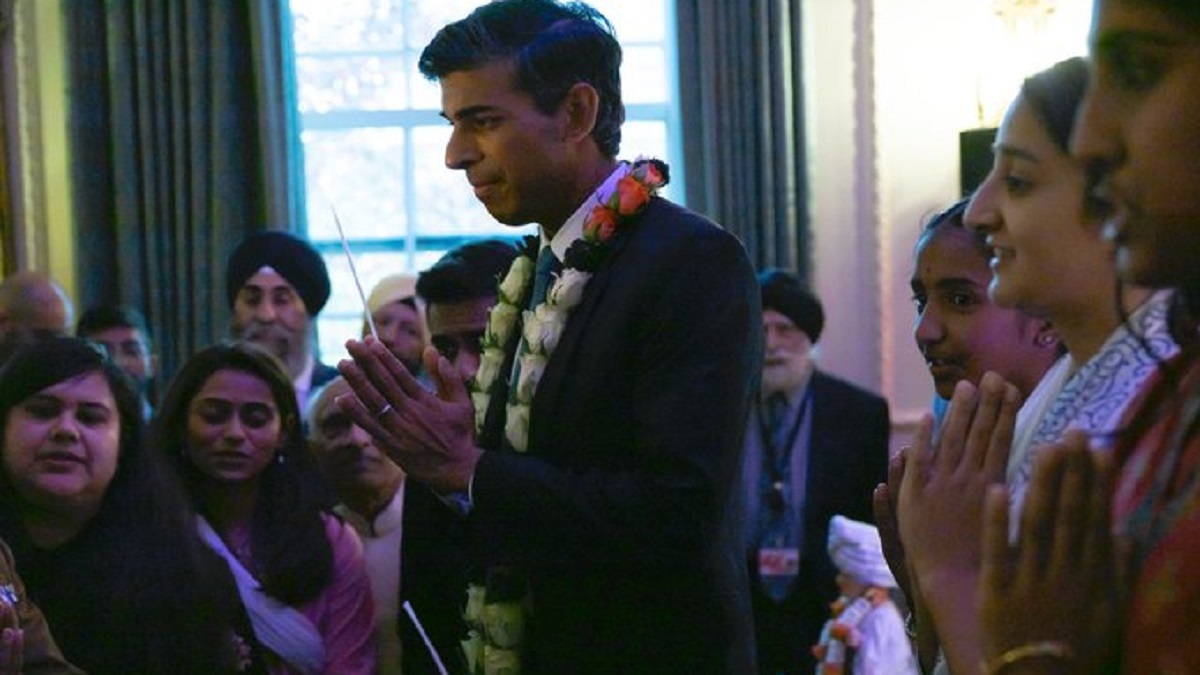 Rishi Sunak on Wednesday pledged to provide Britain with a hopeful future. The newly elected UK Prime Minister shared a picture on his Twitter handle, which showed him attending a Diwali reception at 10, Downing Street. In his social media post, Sunak extended festival wishes to everyone and said he will do all that it takes to build a Britain.

“Brilliant to drop into tonight’s Diwali reception in No10,” Rishi Sunak wrote on Twitter.

“I will do everything I can in this job to build a Britain where our children and our grandchildren can light their Diyas and look to the future with hope. Happy #Diwali everyone!” he said.

Sunak on Tuesday took charge as Britain’s first Indian-origin Prime Minister with a promise to put the crisis-hit country’s needs “above politics” and “fix the mistakes” made by his predecessor. This came a day after he was elected the leader of the Conservative Party in a historic leadership run.

The 42-year-old investment banker-turned-politician is the youngest British prime minister in 210 years.

In his first address at the doorstep of 10 Downing Street in London after meeting King Charles III at Buckingham Palace, Sunak said that he takes over at a time when the UK is facing a “profound economic crisis” as it deals with the aftermath of COVID and the Russia-Ukraine conflict.

Sunak asserted that he is “not daunted” by the high office he has accepted and hopes to live up to its demands.

“I admired her restlessness to create change. But some mistakes were made. Not borne of ill will or bad intentions. Quite the opposite in fact, but mistakes nonetheless,” he said about his predecessor Liz Truss.

“And I have been elected as leader of my party, and your prime minister in part, to fix them. And that work begins immediately,” Sunak said as he sought to bring stability to the UK after months of political and economic turmoil.

“I will unite our country not with words but with action. I will work day in and day out to deliver for you,” Sunak, the second prime minister in as many months and the third this year.

Sunak, Infosys co-founder Narayana Murthy’s son-in-law, warned of “difficult decisions to come” and pointed to his record as chancellor of exchequer during the pandemic to promise that he will bring that “same compassion” to the challenges ahead.

“I stand here before you ready to lead our country into the future, to put your needs above politics, to reach out and build a government that represents the very best traditions of my party. Together we can achieve incredible things. We will create a future worthy of the sacrifices so many have made and fill tomorrow and every day thereafter with hope,” he said.

On a somewhat defiant note to address the Opposition clamour for a general election, he stressed that the mandate the Conservative Party won in the 2019 general election is not the sole property of one person – with reference to former Prime Minister Boris Johnson – but “a mandate that belongs to and unites all of us”.