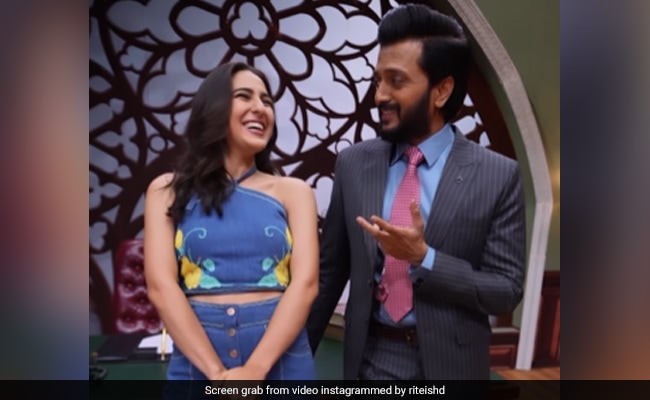 Sara and Riteish in a still from video. (courtesy: riteishd)

Riteish Deshmukh’s latest film Ved, where he shared the screen with his wife Genelia D’Souza, was released on December 30. Now, he has shared a video with Sara Ali Khan. It seemed to have been shot on the sets of Riteish’s talk show Case Toh Banta Hai. In the clip, Riteish asks Sara, “Hi Sara. Mala saanga tumhara kuthli goshticha “ved” aahe (Please tell me what are you crazy about?)” To this, Sara replies with a smile and says, “Knock knock jokes.” For the unversed, Sara is known for her hilarious jokes on social media.

As the conversation progresses, she adds, “Knock knock.” Riteish replies, “Who’s there?” Sara randomly says, “Agarwal.” Riteish then, asks, “Agarwal who?” Sara answers, “Agar-wal nahi hoti toh ghar gir jaata (the house would have collapsed without the support of the wall).” After this, Sara laughs at her own joke. Riteish exclaims, “Kae vedis aahe tu! (Are you mad?)” Sara says, “Aap veda (you are mad.)” Riteish repeats, “Tu vedi,” and walks out of the frame. For the caption, Riteish stated, “Knock knock …. VEDness is here!! Thank you Sara Ali Khan for knocking this out of the park..”

Before this, Riteish Deshmukh also shared a video with Kareena Kapoor. In the clip, Riteish asks Kareena, “Tumchya saathi ved mhanje kaay (What is madness for you?)” To this Kareena replies, “I think, Ved means your film. I think it’s madness, ek nasha hain (there’s some intoxication), it’s the madness for love.” She further looks at the camera and adds, “Jya premat ved nahi, te prem naahi (If there is no madness, there is no love!).” In the end, she wishes Riteish all the very best for his film. For the caption, Riteish wrote, “Jya premat ved nahi, te Prem naahi Kareena Kapoor thank you so much – a big big hug.”

Riteish Deshmukh also dropped a video with Ananya Panday when she appeared on his talk show Case Toh Banta Hain. In the clip, you can see Riteish shaking a leg with the Liger actress on the tunes of the song Ved lavlay, from his film Ved. T “Thank you so much dearest Ananya Panday for this VEDness. You are totally awesome,” added Riteish in the caption.

Riteish Deshmukh has made his directorial debut with Ved.