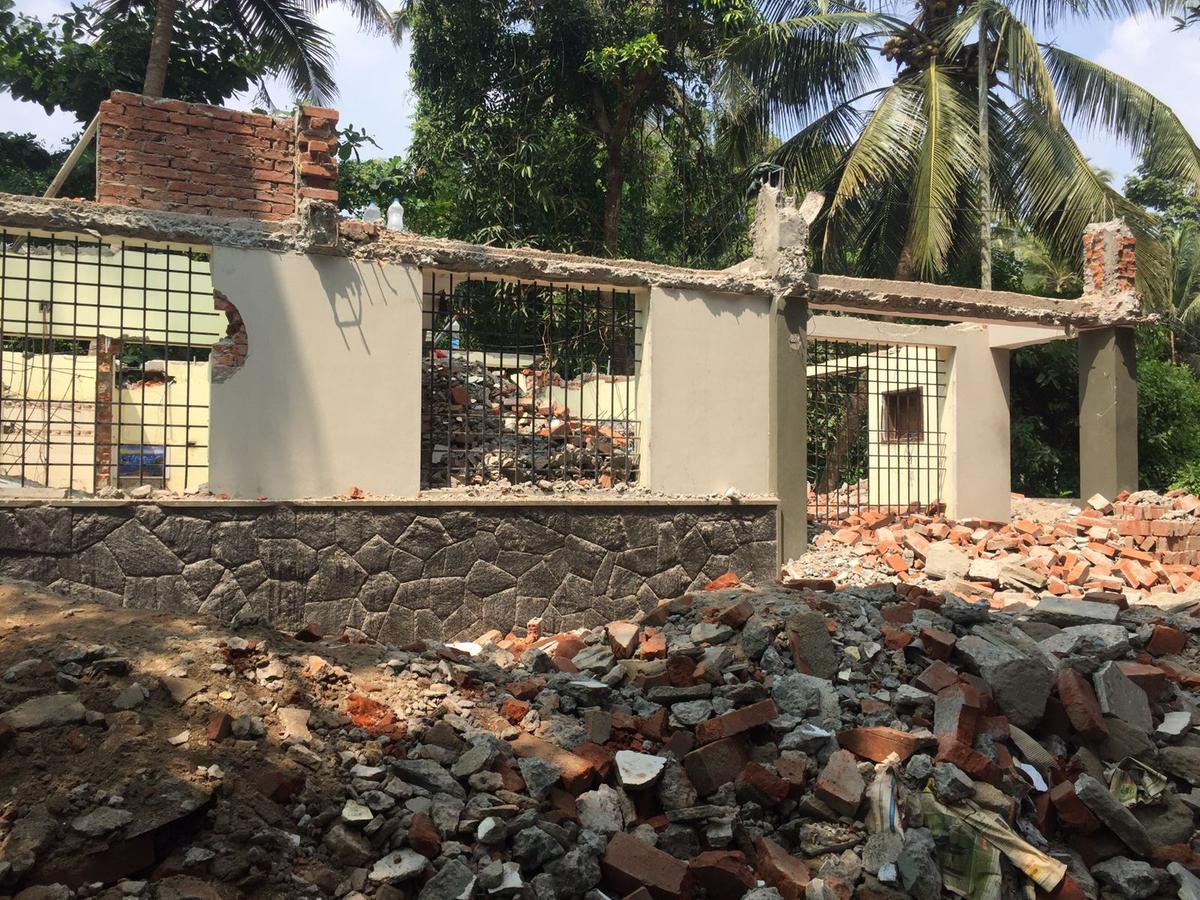 The deceased were identified as Sushanth Kumar, 38, and Sankar, 28, both residents of Odisha

The deceased were identified as Sushanth Kumar, 38, and Sankar, 28, both residents of Odisha

Two migrant workers were crushed to death when the concrete slab of a two-storey house they were demolishing came crashing down on them in Maradu on Wednesday around 11 a.m.

The deceased were identified as Sushanth Kumar, 38, and Sankar, 28, both residents of Odisha. Local residents were already in the middle of a rescue operation by the time Fire and Rescue Services personnel and police rushed to the scene. Though they were rushed to a nearby hospital, they were declared dead soon thereafter.

The other three migrant workers on the scene were left hysterical as they saw the victims being buried under the huge concrete slab. One of them dashed outside seeking help at which point local residents were alerted to the tragedy.

“I was on the way to Tripunithura when I see people and some cops running. I initially thought cops were chasing some thieves and joined them only to be told that two workers remained trapped under the slab. The slab had completely filled the room leaving us with little space to manoeuvre,” said Navas, who was among those who joined the initial rescue operations.

“When we came in, two workers were trying to move the slab and we joined them with little success since the slab was too heavy. So, we brought some supporting poles and stopped two lorries passing by the road in front to fetch a jack and ropes to lift the slab,” said Madhu, a local resident who was among the first to rush to the scene.

The arrival of the two units from Gandhi Nagar and Tripunithura fire stations eventually helped recover the trapped victims. “Both victims were fully buried under the slab and we used our hydraulic jacks to remove the slab. Apparently, the roof was being demolished from above and the victims were caught beneath when it came crashing down. There were no safety measures whatsoever and none to supervise the work that would have averted the casualty,” said Sambhu Namboothiri, assistant station officer, Tripunithura fire station. District fire officer Harikumar K was also present.

Maradu municipal chairman Antony Ashanparambil attributed the accident to demolition work without proper safety mechanism. “The concrete slab should have been propped up on supporting levers before cutting it on all four sides and bringing it down. However, in this case, the slab was simply cut on all sides leading to its free fall crushing the workers beneath,” he said.

The demolition work was underway for over two weeks now. Sunny Mathew, a retired bank official in the immediate neighbourhood, said that there was no supervision of the work by the unskilled migrant workers at any point.

“The contractor simply dropped them at the worksite every morning. The lack of proper supervision of what was a technical job led to the accident. When the screen separating the demolition site from my house to keep off the dust was torn, I had to effectively stall the work for 45 minutes before the contractor arrived and got the screen back,” he said.

The owner of the house, Upendra Ram had given the demolition contract to one Ansar of Nettoor.

Maradu police said that a case will be registered against the contractor under IPC Section 304 (culpable homicide not amounting to murder).