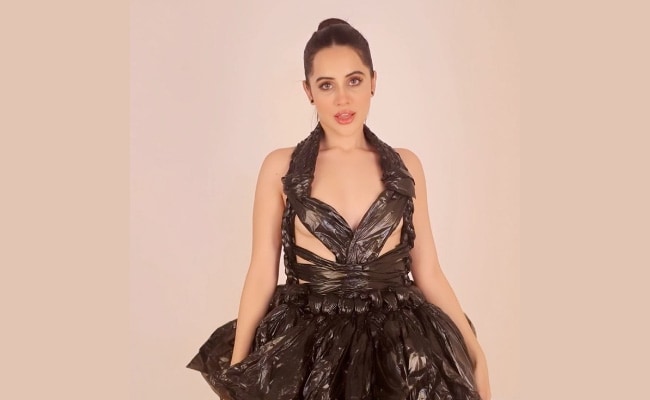 A still from the video. (courtesy: urf7i)

Uorfi Javed needs no introduction. The Bigg Boss OTT contestant is known for her unique fashion outings. From making a dress out of sim cards to cut-out pattern dresses, Uorfi Javed loves to play around with her outfits. Now, with her latest post, Uorfi Javed is reminding us of her days inside the Bigg Boss house. Remember when she made a dress out of a dustbin bag and wore it? Yes, you guessed it right. She has done it again. But this time, it’s “better”. Not our words. Uorfi Javed has shared a video on Instagram in which she is seen with a garbage bag in her hand. The text on the video read, “So, when I was in Bigg Boss I made an outfit out of a dustbin bag, let’s repeat history but better.” Oh, and, not one but she has tried two dresses. The first one is a midi dress with a frill pattern and cut-out detailing on the neckline. The next one is a bodycon dress. In the caption, Uorfi Javed said that content creator Komal Pandey has been her inspiration for the garbage bag outfit. It read, “I could literally wear this to a red carpet event not kidding. Also the OG dustbin bag outfit I made in Bigg Boss was inspired by Komal Pandey! Keep inspiring.”

Uorfi Javed’s DIY garbage outfit had created a lot of buzz back then. Her co-contestants, including singer Neha Bhasin, gave it a thumbs up. You can check the video here:

Now, let us take a look at  Uorfi Javed’s Christmas 2022 outfit. She picked a red latex dress with the signature cut-out pattern, and oh boy, it looked stunning.

Uorfi Javed recently made a starry appearance in the reality show SplitsVilla 14. Sharing a promo of her appearance on the show, Uorfi Javed wrote, “Splitsvilla is in my nerves now, jab bhi aaungi hulchul macha kar jaungi.”

The show currently airs on MTV every weekend at 7 pm.