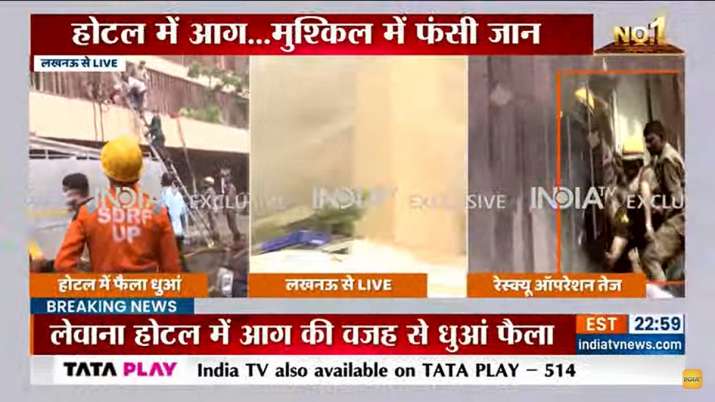 UP fire Lucknow: A massive broke out at a hotel in Uttar Pradesh’s Lucknow on Monday morning, and as per reports, at least 2 people have been killed in the fire. As per sources close to India TV, both were declared brought dead by the Civil Hospital in Lucknow. Besides, 7 people have receiving treatment at the hospital.

Fire tenders reached the Levana Hotel located in Hazratganj, and efforts are underway to evacuate those trapped inside. So far, 18 people have been evacuated.

As per reports, UP Chief Minister Yogi Adityanath has taken cognisance of the situation and has directed officials to provide proper treatment to those injured in the fire. Along with this, the District Magistrate and senior police officers have been directed to reach the spot immediately and expedite the relief and rescue work.

As per Lucknow DM, a short circuit could have been the cause behind the fire. “Cause (of the fire) is being ascertained. There’s a possibility that it happened due to a short circuit. 18 of the total 30 rooms were occupied, and probably 35-40 people were there. The people who were stuck were evacuated and they have been sent to Civil Hospital,” he told the media.